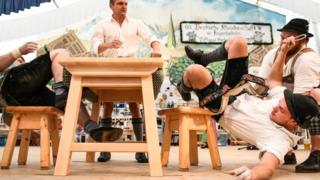 Men in traditional Bavarian costume squared off across tables for one of the world’s more unusual competitions – German finger wrestling (Fingerhakeln).

Competitors, who are matched in weight and age, sit opposite each other and pull on a small leather loop using just one finger.

The winner is the one who pulls his opponent across the table.

The 60th annual championships took part in Garmisch-Partenkirchen, southern Germany, on Thursday as part of the Partenkirchner Festival Week.

As in other forms of wrestling, those taking part must put in lots of training. Squeezing tennis balls and lifting heavy weights with just one finger are both part of the routine. To emerge triumphant, technique and physical strength are important, as is a high pain threshold.

The contest is not without its hazards. Injuries include cuts, friction burns and broken or dislocated fingers.

Fingerhakeln is traditional in Bavaria and in Austria. Its origins are unclear but it is believed to have started as a way of settling arguments.