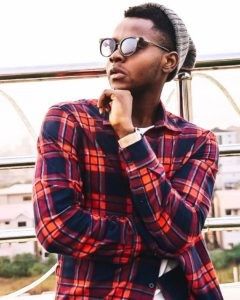 Kiss Daniel was recently at the Beat FM Lagos office where he sat with one of their seasoned OAPs to talk about certain issues pertaining to his music, his rumored relationship with Chidinma and his experience under G-worldwide.

Another caller asked him to speak on his coming projects and Kiss Daniel revealed that his much anticipated collaboration with Wizkid would be dropping late this month (April, 2018). He said,

‘Myself and Wiz, we are putting out a record later this month.’

In minute 3:07 of the interview, Kiss Daniel was asked how the  collaboration (with Wizkid) happened.

‘I reached out to him via social media on Twitter or Instagram and he replied. I told him I want us to work together on a song. He is a very good guy, Wiz is calm. He invited me over and we had a beautiful session. We recorded like three songs’, he said.

Further into the interview, he stated that he would be dropping a new album next year and that he would be doing mostly collaborations this year. In response to a question about the rate at which he reads messages in his DM, Kiss Daniel said,

‘I always check my DMs’

He was pressed to say if he checks his DMs for ladies. Kiss Daniel confirmed that indeed a lot of women slide into his DM including some of the popular female figures. However, he said he checks his DMs to scout for fresh talents citing the instance of Barry Jhay who was reportedly recently signed to his Flyboy I.N.C label.

He went on to talk about his interest in signing a female artiste, stating that the only reason he hasn’t signed one is because he hasn’t found one that satisfies his interest.

About the restriction on collaboration during his G-worldwide days, Kiss Daniel said,

He was asked if he wanted to collaborate with other artistes but was restricted by the label, he said,

” Definitely. Sugarboy is an example he is not doing collaborations too.”

He added that the G-worldwide no-collaboration policy helped his career initially until it stretched for too long and it started to become limiting. At the minute 5:19 of the interview, Kiss Daniel was asked why he was hardly ever seen at social gatherings during his time with his ex-label. He said,

‘I am a complete introvert, I am always in the house, in the studio. I am always recording, always working.’

Other issues he addressed during the interview, includes the controversy surrounding his real real age, the set-up process of his label, Flyboy I.N.C and the direction of his next album.