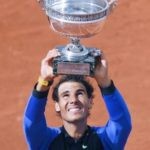 Rafael Nadal has defeated fourth seeded Stan Wawrinka 6-2, 6-3, 6-1 in just over two hours to become the first player in the Open Era to win 10 titles at any Grand Slam event.

Nadal will now move to no.2 in the world tennis rankings, and he is just three grand slam title victories behind all-time men’s singles title leader Roger Federer (18).

“It’s really incredible. To win La Decima is very, very special,” Nadal said, fighting back tears on the presentation stage alongside his uncle Toni, who will be stepping down as his coach year’s end.

“I am very emotional. The feeling I have is impossible to describe.”