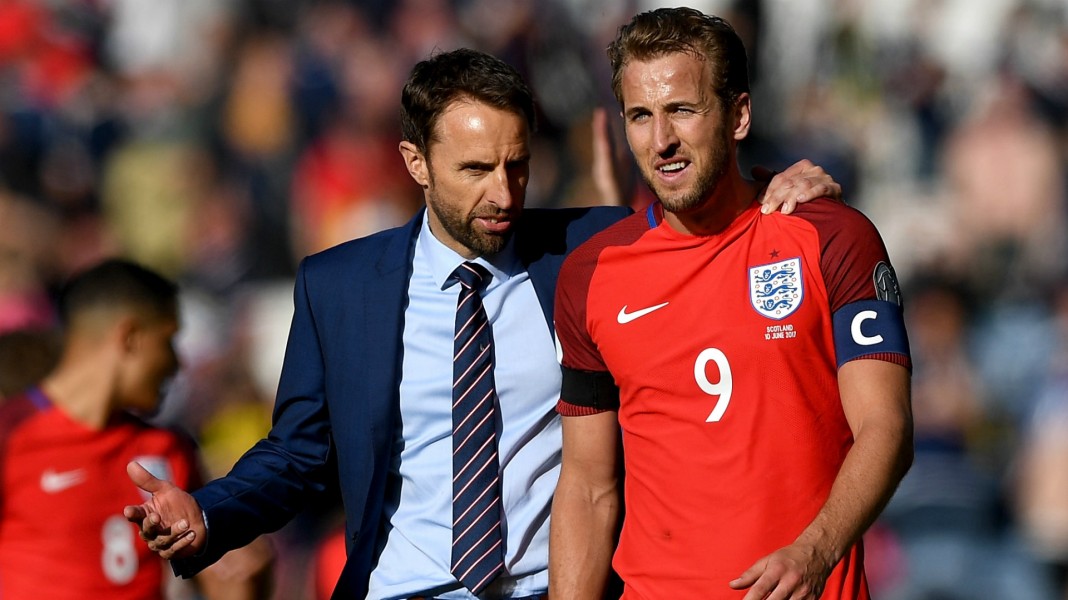 Harry Kane will once again captain England in France

Gareth Southgate will have a fully-fit England squad to choose from when his side take on France in an international friendly in Paris on Tuesday (kick-off 8pm).

The 23-man team came through Saturday’s 2-2 draw with Scotland unscathed, although there are likely to be changes as Southgate continues to experiment with his new players.

The manager sees the match at the Stade de France as a chance for England to test themselves against a tough side, who were Euro 2016 finalists just under a year ago.

“France is a great challenge for us. Our ambition with our friendly matches is to play the best possible teams – we’ve done that by playing Spain and Germany already,” Southgate told the official FA website.

“They’re teams we want to test ourselves against and these are great opportunities to learn and improve. A game away in the Stade de France will be a brilliant occasion for the players.” Deschamps guided France to the European Championship final last year but results since then have been inconsistent, and he has warned his players that places are now up for grabs.

“No one has any guarantees,” said Deschamps.

“It can happen that you’re not in good form for one or two games, but there are quality alternatives available.”

Gareth Southgate confirms Tom Heaton will start in goal against France, but insists this was always the plan

For England, there are a few areas that could be subject to change, with Southgate confirming that Tom Heaton will start the game in goal while Jack Butland will play the second half.

There could also be debuts for defenders Ben Gibson and Kieran Trippier, who performed well with their clubs Middlesbrough and Tottenham last season, while Harry Kane will retain the captain’s armband.

Jamie Vardy and Nathaniel Clyne withdrew from the England squad before Saturday’s trip to Scotland and will not be available for selection this week.

France are sticking with Lloris, who was to blame for the 2-1 defeat in Stockholm when his poor clearance gave Ola Toivonen the chance to score a last-minute winner.

England have won only one of their last six away games against France (D1 L4), a 1-0 win under Glenn Hoddle in June 1997.

However, England did win their last meeting with Les Bleus, in a friendly at Wembley in November 2015 (2-0).

England have scored just nine goals in their last 11 meetings with France, with three of those being scored by Tottenham players (Gary Lineker in 1992, Peter Crouch in 2010 and Dele Alli in 2015).

Ahead of England’s international with France, select your combined XI between the two squads

France have won seven of their last nine home friendly games, including a 5-0 win against Paraguay last time out in which Arsenal forward Olivier Giroud scored a hat-trick.

England have won just one of their last five away friendlies (D2 L2).

The Three Lions have now gone three away internationals without a victory (D2 L1), something they last did in September 2013.

In his last four appearances for club and country combined, Harry Kane has scored nine goals.

Since losing the Euro 2016 final to Portugal, France have lost just twice (W6 D2 L2), but both of those losses have come in the last three games.

Well it obviously wasn’t a good performance from England against Scotland and I think Gareth Southgate really got his tactics wrong. He will have questions to answer if they lose to France and I can see them doing so.

France have got a lot of exciting young players, with Thomas Lemar, Ousmane Dembele and Kylain Mbappe in particular, and they’ll be keen to respond to their 2-1 defeat to Sweden.

Olivier Giroud scored a stunner though so he should keep his starting place alongside Antoine Griezmann, with the young cavalry coming on to offer a second wave of threats later in the game.

That will be a major problem for England as they’ll be tired, having had a day’s less rest and having to battle until the final minute against Scotland.

France are a shade of odds on (10/11) to beat Gareth Southgate’s men, who can be backed at 3/1 for victory with Sky Bet.

Having scored on his first start as England captain, Harry Kane will been popular in the goalscorer markets. He’s 13/2 to score the first goal, 9/4 to fire at any time and has been boosted to 18/1 from 14/1 to score with a header.

The array of attacking talent in the French ranks with the likes of Antoine Griezmann and Kylian Mbappe means England will need to be on their guard to tame them. Over 3.5 goals and France to win is a 9/2 shot.