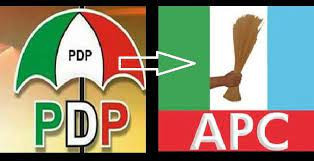 APC, Four members of the House of Representatives elected on the platform of the Peoples Democratic Party (PDP) from Zamfara State on Tuesday defected to the All Progressives Congress(APC).

In a letter signed by Rep. Suleiman Gumi and read at Tuesday plenary, the lawmakers said they were leaving the PDP because of the crisis within it, which led to the dissolution of the state chapter by the national leadership of the party.