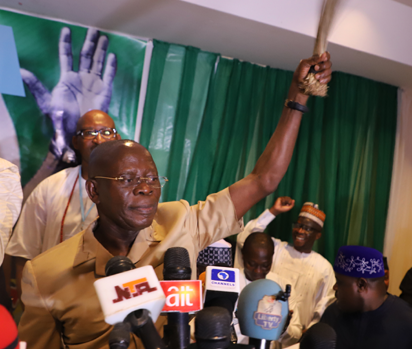 Former governor of edo state Adams Oshiomhole declares for APC Chairmanship
Immediate past Governor of Edo state, Comrade Adams Oshiomhole has declared his intention to take over the reins of the leadership of his All Progressives Congress APC at the National Convention slated for June 23. Former Edo State Governor, Comrade Adams Oshiomhole during his declaration for the position of National Chairman, All Progressives Congress at the Osun Hall, Transcorp Hilton Hotel, Abuja. Photo by Abayomi Adeshida At a crowded ceremony Thursday in Abuja, the former labour leader also stated that while he wants to be of use to all, he would never be anyone’s puppet. “To promote party supremacy and party unity on a sustainable basis, the party must ensure discipline within its ranks and evoke sanctions where appropriate. For us, rules and policies are useful to the extent that they are enforced. To sustain party unity, there must be party discipline. Once a party position is taken, anyone who goes against the party position will be subjected to party discipline in line with the party Constitution following due process. Without sanction for misconduct and commendation for proper conduct, there cannot be party discipline. “I want to be of help, I want to be of use to all those who need it but I am not capable of being used. I believe that this needs to be clarified because there is so much suspicion in our political space. People fight often for things they are not even quite sure of what they think they are. They are fueled and sustained by suspicion. The way to eliminate suspicion, is to put on the table what is on the table. What is under the table, keep under the table until it moves to the top of the table. “I want to assure Nigerians that I believe with a new leadership of the APC and with our president whom I believe is ever determined, no matter what anybody wants to say, I want to take that again, no matter what anybody wants to say, there will be time to engage in all of those contestations as we approach 2019 the electioneering campaign and those who wish to contest on various party platforms comes to the open, we will know the players, we will know their coach, we will be able to engage. “Until then, so that I don’t change headlines, there is only one thing I want to say here and now that the worst critic of the president of Federal Republic of Nigeria, President Muhammadu Buhari, the worst critic will agree that the President is not a thief. President Buhari is not a thief. That for me is the starting point and we will challenge others”, he stated. According to him, the irreducible minimum responsibility of the leadership of a political party and of the All Progressives Congress “if I am privileged to become chairman, would be to concertly help the executive and the legislature to fight common grounds to win together. ” Let me say that I think with all sense of modesty that I am well prepared for this kind of role. I was employed as a factory hand, under a management regime in which I was called or I was compelled to sign company rules and regulations in which I was obliged almost under duress to say that I shall obey all the rules even without knowing what all those rules were. “I was compelled to sign my application as yours obedient servant. But once I signed, I will organise. My first task was to question the entire concept of managerial or management prerogative and to insist that whereas, we recognise the authority of the employer, that authority can be exercised, bearing in mind that it is being exercised over human beings who have no just constitutional rights made by men but inalienable rights made by God. So, the skill to negotiate, the skill to persuade, the skills to make consensus, the skills to do give and take, the skill to talk through a process that will lead to win-win solutions rather than the winners and the losers, those are the tools I have deployed as a branch union leader, becoming the president of the Nigerian Labour Congress. “So, I am not a stranger. I believe that the idea of the constitution and the spirit behind it, it has been deliberately framed in such a way that no one will have his ways, but all, we can have our ways if we negotiate, persuade, discuss and have a sense of collectivity as we move on”. We shall hold regular party meetings
Share
Facebook
Twitter
WhatsApp
Pinterest
Linkedin
ReddIt
Email
Print
Tumblr
Telegram
Mix
VK
Digg
LINE
Viber
Naver
Previous articleNigeria’s President Buhari under pressure to reveal illness
Next articleGovernor Masari says, ”Only someone from the moon can defeat PMB in 2019”