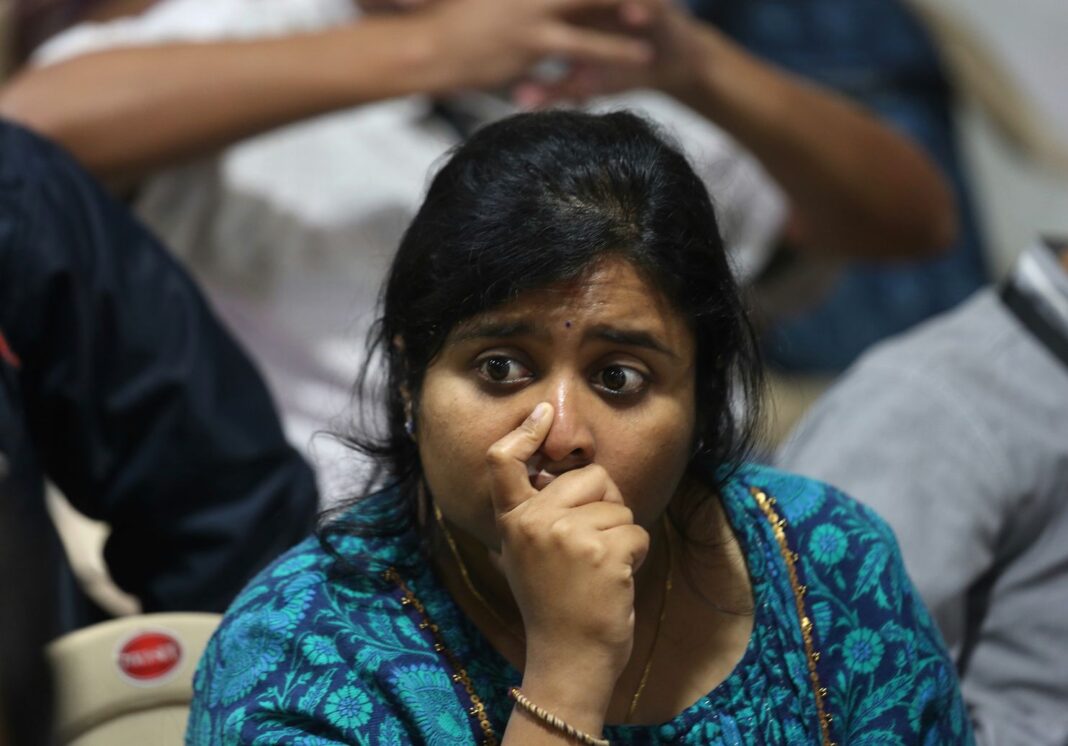 The reaction at the Indian Space Research Organization was dismay when India’s lunar lander apparently crashed on descent. U.S. companies also felt the failure. (Jagadeesh Nv/EPA-EFE/Shutterstock)
September 15 at 6:46 AM

The team was gathered in a conference room last week, about 35 in all, ready to celebrate India’s triumph: the country’s first lunar landing. Like many watching the live-stream broadcast from the control center in Bangalore half a world away, John Thornton, the chief executive of Astrobotic, a Pittsburgh company that is developing a moon lander of its own, was confident India would stick it, setting off celebrations across the world.

But there was silence and long faces in India’s mission control, not celebration, when they lost contact with the lunar craft, and there was silence, too, in Astrobotic’s conference room, as Thornton’s team was reminded that the difficulties of orbital mechanics and the vacuum of space are not to be taken for granted. “Everything has to be working just right,” he said. “It’s like humankind against space.”

Soon it will be their turn to attempt to land on the moon. Astrobotic is one of nine companies that NASA is betting on as part of a program to deliver science experiments to the surface of the moon. The list comprises small start-ups, like Thornton’s venture, that grew out of Carnegie Mellon University, and industry stalwarts, such as Lockheed Martin and Draper, which provided navigation and guidance systems during the Apollo era.

NASA intends to invest $2.6 billion over 10 years in relatively small contracts — some under $100 million or so — for delivery services to the moon under a program called Commercial Lunar Payload Services (CLPS). That’s a small fraction of the estimated $20 billion to $30 billion it would spend on its Artemis program, designed to get humans to the moon’s surface by 2024.

Under CLPS, NASA isn’t designing, building or operating the landers that will make these lunar trips — that’s all up to the companies. Instead, NASA is simply hiring them to provide a FedEx-like service to a lifeless celestial body 240,000 miles away. The plans even include sending a rover to the lunar south pole, a mission that could help NASA decide where its astronauts should land.

The endeavor is risky, the effort entrepreneurial, and failure is more than an option, NASA says: It’s likely.

And that’s just how NASA wants it, as it tries to hit a cadence of two deliveries to the moon per year starting in 2021.

NASA Administrator Jim Bridenstine likens the program to a venture capital fund investing in a start-up, where the upside is as high as the risk of failure. And some of the companies NASA is looking to are unconventional. One, Firefly, went bankrupt in 2016 when it lost a key investor. Another, Masten, has 12 employees and works out of a dusty barn in the Mojave Desert.

“The idea is that it is low investment, high risk, which means some will fail,” Bridenstine said in an interview. “But if one is successful, the returns to NASA and the returns to the United States of America will be significant.”

Earlier this year, he told reporters: “It’s important we get back to the moon as fast as possible. We’re going to take shots on goal.”

Astrobotic plans its first moon mission in 2021. It would be the culmination of a long and unlikely odyssey. The company was co-founded in 2008 by a Carnegie Mellon University professor who recruited some of his current and former robotics students to join him in building a spacecraft for the Google Lunar X Prize, then a competition to get payloads to the moon.

The company was able to drum up money from angel investors and the university, but still it went through “nearly two deaths,” Thornton said. He took over as chief executive and refocused the company on trying to develop and market a commercial delivery service to the moon.

The idea was derided as fantasy, and as he was pitching Astrobotic to investors at a conference, there was “one guy laughing the entire time,” he recalled. “And he wasn’t laughing with me.”

Earlier this year, however, NASA awarded it a $79.5 million contract, a big source of revenue for the small company that gave it a douse of credibility it hadn’t had before. Last month, it chose its ride to the moon, signing a deal with the United Launch Alliance to launch its Peregrine lunar lander, which stands about 6 feet tall, on ULA’s Vulcan Centaur rocket.

An artist’s rendering of Astrobotic’s Peregrine lunar lander, which the Pittsburgh company hopes to send to the moon in 2021 as part of a NASA program to send science experiments to the lunar surface. (Image courtesy of Astrobotic)

But getting to the moon is hard, as Israel learned in April when its Beresheet spacecraft crashed into the moon. It was a devastating outcome, but industry leaders and Prime Minister Benjamin Netanyahu, who was in the mission command center, vowed to learn from it and push on. “If at first you don’t succeed, you try again,” Netanyahu said.

Then last week, India lost communication with its spacecraft as it descended toward the moon, a heartbreaking outcome for the country’s space agency. It has since located the lander but has not established communication with it or released any details about its condition.

India is also taking stock of its lunar ambitions. The lunar lander seemed to be on the right trajectory, but then in the final moments appeared to fall straight down, stunning the people packed in the space agency’s control center. Afterward, Indian Prime Minister Narendra Modi said, “Our determination to touch the moon has become even stronger.” And he consoled a distraught K. Sivan, the head of the county’s space agency, with an emotional embrace.

In a tweet, NASA encouraged the Indian space agency, saying, “You have inspired us with your journey.” And it vowed to work to “explore our solar system together.”

These were the first attempts by Israel and India to land on the surface of the moon, so failure may have been expected, as it was at the dawn of the Space Age, when countries treated the moon like a dartboard, crashing spacecraft into the lunar surface as if it were target practice.

In the 1960s, spacecraft like the Soviet Luna 2 and NASA’s Ranger 7 plowed into the lunar surface routinely, as space agencies taught themselves how to hit another celestial body.

Failed moon missions might have been politically acceptable when the United States was racing the Soviet Union in the Cold War space race. Today, however, there could be a backlash if NASA and its commercial partners can’t successfully perform a feat that NASA first accomplished in the 1960s.

There may also be institutional resistance to adopting a Silicon Valley ethos — fail fast, iterate, try again — to a 60-year-old federal bureaucracy overseen by the U.S. Congress, a body not likely to rejoice at the prospect of expensive spacecraft careening into Earth’s closest neighbor.

“In reality, the question we’ll have is how much tolerance will our political system have for failure?” said Michael Neufeld, a senior curator at the National Air and Space Museum. “Does the taxpayer want to pay for stuff that’s blowing up and crashing? It’s a lot easier to talk about taking risk than it is to actually do it.”

If India, which has one of the most robust space agencies in the world and successfully put a spacecraft in orbit around the moon in 2008, had troubles landing, how can a bunch of start-ups, some working out of glorified garages and relying on small government contracts and venture capital funds do it?

The answer, NASA says, is that the commercial space industry has come a long way, developing new technologies and taking on increasing responsibility for NASA. Two companies — Northrop Grumman and SpaceX — deliver cargo and supplies to the International Space Station, and another two, SpaceX and Boeing, are working to fly astronauts there.

Given the maturity in the industry, Steven Clarke, NASA’s deputy associate administrator for exploration, said he is confident that private industry is ready to take on the moon, even if some of the companies in the program have never flown anything to space before.

The “strengths of the commercial industry have come up and matured, and so we’re willing to take additional risk with them,” he said in an interview.

But while NASA says it’s willing to tolerate a certain amount of failure, the companies involved say their goal is to succeed. They want to have not just NASA as a customer but also to ultimately build a commercial business flying science experiments and payloads to the lunar surface.

“For us, success is of the utmost importance,” Thornton said. “It’s not like we’re out there taking unreasonable risk. That does not work for our business plan. The one who will lead in this market five years from now is the one who has successful flights.”