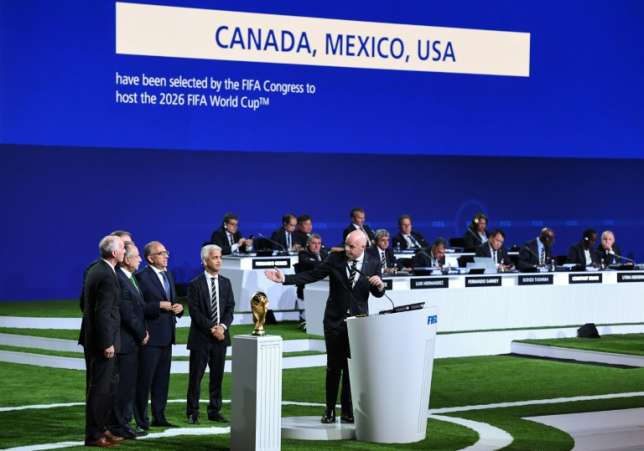 The United States, Mexico and Canada will host the 2026 World Cup after easily beating underdogs Morocco in a vote of FIFA member nations in Moscow on Wednesday.

The United States, Mexico and Canada will host the 2026 World Cup after easily beating underdogs Morocco in a vote of FIFA member nations in Moscow on Wednesday.

The joint North American bid defeated their north African rival by a margin of 69 votes, 134 to 65, to win the right to organise the first World Cup to be expanded to 48 teams.

The result at the FIFA Congress on the eve of the 2018 tournament means global football’s showpiece event will return to the North American continent for the first time since the United States hosted it in 1994.

Bid leader Carlos Cordeiro said his team was “humbled” by the result and predicted the tournament would put football “on a new and sustainable path for generations to come”.

The United States-led bid was adjudged to be technically superior by a FIFA taskforce, with 23 stadiums either already built or under construction, and the inspectors made the US-Canada-Mexico bid the clear favourite after rating it four out of five

In contrast, Morocco’s bid existed largely on paper — it would have had to renovate or build 14 stadiums and critics questioned how it would have coped with the expanded tournament.

FIFA inspectors classified its stadiums, accommodation and transport as “high risk”, awarding it just 2.7 out of five in an evaluation report.

Morocco’s appeal to the heart to take the tournament back to Africa for just the second time after South Africa in 2010 was not enough to bridge the gap.

FIFA president Gianni Infantino was believed to have strongly backed the North American campaign because the trio of countries involved supported him in 2016 when he took over after the corruption-tainted reign of Sepp Blatter.

US President Donald Trump tweeted: “The U.S., together with Mexico and Canada, just got the World Cup. Congratulations – a great deal of hard work!”

The North American team had been deeply concerned by Trump’s threat during the bidding process that nations that did not support it should not expect US support on other issues.

Bid leaders feared the FIFA vote could essentially become a referendum on Trump.

That prompted Cordeiro to plead ahead of the ballot for voters to make their decision on the merits of their case, “not geopolitics”.

After the vote, Cordeiro said he believed the North American approach of using three countries would become the “legacy for the future”.

Canadian Prime Minister Justin Trudeau tweeted: “Congratulations to everyone who worked hard on this bid — it’s going to be a great tournament!”

Mexican President Enrique Pena Nieto said the three winning countries were “deeply united”, despite quarrels over the future of a free trade agreement that has bound them since 1994.

The 1994 World Cup in the United States set an attendance record that still stands, with nearly 3.6 million spectators for only 52 matches.

That suggests that North American bid leaders’ promises to deliver a record $11 billion profit for the 2026 tournament are feasible.

The decision will be a shot in the arm for football in the United States after the national team failed to qualify for 2018 in a huge setback for the game there.

It will also be celebrated in football-crazy Mexico, which hosted the World Cup in 1970 and in 1986 — the tournament remembered for Diego Maradona’s “Hand of God” goal.

But the result was a bitter blow for Morocco after a fifth failed bid.

Morocco was quick to congratulate the winner, tweeting “#Maroc2026 congratulates @United2026 on their victory.”

France, in particular, lobbied behind the scenes for French-speaking Morocco and the bid had the support of most African nations.

The US defeat by Qatar in its bid to host the 2022 World Cup is now tarnished by corruption allegations that spelled the beginning of the end of the once all-powerful FIFA president Blatter.

That vote prompted an overhaul of the rules. Whereas previously the 24 members of the FIFA Executive Committee used to determine World Cup races, the host is now decided by a vote of individual FIFA member nations.