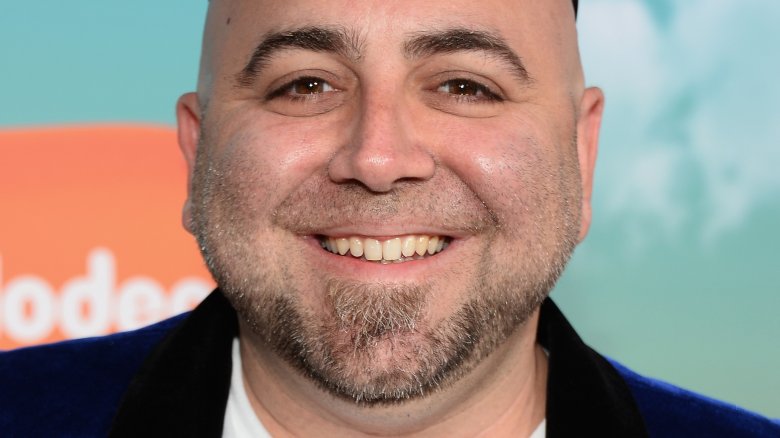 Congratulations are in order for Ace of Cakes‘ Duff Goldman!

On Monday, Jan. 21, 2019, the Food Network star took to Instagram to announce that he and longtime girlfriend Johnna Colbry tied the knot this past weekend in the dinosaur exhibit of Los Angeles’ Natural History Museum.

“1.19.19 DINO-MITE,” Goldman simply wrote to his 288,000 followers, captioning a sweet black-and-white snapshot of the happy couple on their big day. For her part, Colbry shared the same pic alongside an apt quote from The Land Before Time, which read, “Let your heart guide you. It whispers so listen closely.”

According to a Martha Stewart Weddings exclusive, the newlyweds exchanged their vows in front of 250 guests in a room full of dinosaur fossils during an interfaith ceremony. With the celebrity chef sporting a black JoS. A. Bank tux, his writer wife donned a beautiful white BHLDN dress. While opening up about their wedding, Goldman told the media outlet, “At the end of the day, you’re marrying your girl. There’s going to be some food there — that’s cool — family will hang out, but, honestly, everything else is just gravy.”

As Nicki Swift previously reported, Goldman, 44, and Colbry, 25, first announced their engagement in April 2018. “I woke up yesterday and it felt like any other day,” Goldman wrote on social media at the time, noting that he “didn’t plan [the proposal] out, it just happened.” He went on to gush about his then-fiancée, writing, “She is kind, funny, smart, beautiful, cool, wise, and sexy. She’s a tempest of feeling … I asked her to marry me. She said yes. I cannot imagine a state of happiness that is more intense than whatever I’m feeling right now. My heart just might burst.”

Readers may already be aware that a number of other celebs have taken the next step in their own relationships — including Marvel star Chris Pratt and his new fiancée, author Katherine Schwarzenegger. The cute pair, who have been romantically linked since June 2018, announced their engagement earlier this month. Sharing a sweet photo of himself kissing Schwarzenegger on the cheek as she looked at her gorgeous engagement ring, Pratt wrote, “Sweet Katherine, so happy you said yes! I’m thrilled to be marrying you. Proud to live boldly in faith with you. Here we go!” Notably, this marks the Parks and Recreation alum’s first relationship since he and Mom actress Anna Faris, with whom he shares 6-year-old son Jack, split up in August 2017.

Congrats again to Goldman and Colbry on their nuptials!