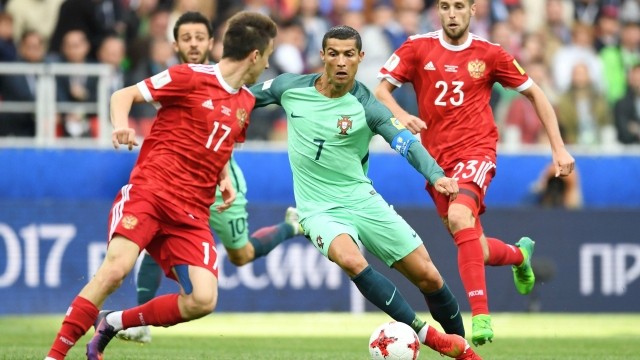 Portugal coach Fernando Santos has praised the character of his players after they held off Russia to claim a hard-earned 1-0 victory in Moscow’s Spartak Stadium on Wednesday.

“In the first half, we played very well, with a lot of personality,’’ he said. “I warned the players at half-time there would be a change though, and Russia pressured us well in the second half,’’ he said.

Portugal’s win took them to the top of their group ahead of Mexico’s game against New Zealand moments after.

The coach added that his team had always been ready to do all required of them, praising the players for their doggedness.

“This team, when they have to sacrifice themselves, they do that. I thank God I have a group of players who are so concentrated and willing to respond to any situation and play their hearts out for their coach.”

Speaking also, the winning goal scorer and Budweiser Man of the Match Cristiano Ronaldo, also expressed his satisfaction at the result.

“I’m very happy,’’ he said. “We knew this was going to be a difficult game against a strong team. This was the first time Portugal has won in Russia and I think we played very well.’’

Russia’s coach Stanislav Cherchesov, on his part, dismissed suggestions that his team had been affected by nerves.

“We certainly did not feel nervous,’’ he said. “Defensively, we lost the ball several times in the first half and did not succeed in launching any attacks.

“But things changed in the second half and we created several good chances. Unfortunately for us, those chances did not yield any goals.’’

Cristiano Ronaldo’s early header was enough to give the European champions all three points at the Spartak Stadium.

In spite of their best efforts, particularly in the second half, the tournament hosts could not find a way past Portugal goalkeeper Rui Patricio in this Group A encounter.(NAN)