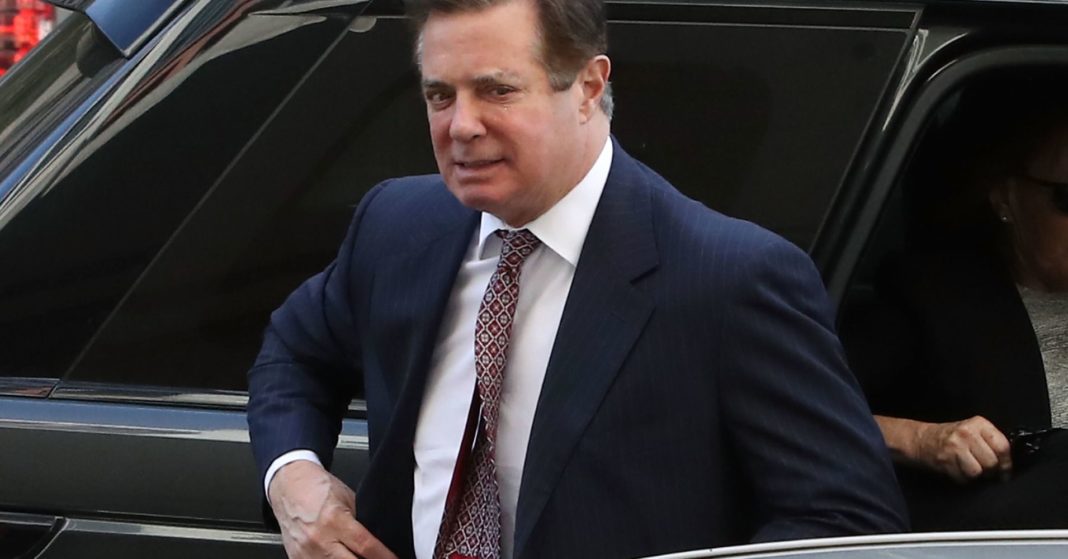 “After signing the plea agreement, Manafort committed federal crimes by lying to the Federal Bureau of Investigation and the Special Counsel’s Office on a variety of subject matters, which constitute breaches of the agreement,” prosecutors said in the document, filed in U.S. District Court in Washington, D.C.

Manafort, meanwhile, “believes he has provided truthful information and does not agree with the government’s characterization or that he has breached the agreement,” according to the filing.

The filing notes that Manafort’s alleged breach maintains all of his obligations under the deal, but relieves the special counsel of its own duties – “including its agreement to a reduction in the Sentencing Guidelines for acceptance of responsibility.”

The special counsel and Manafort both asked the judge to sentence the former Trump campaign chairman.

The filing did not mention what Manafort is specifically alleged to have lied about. It was also not clear whether Mueller will file new charges against Manafort in light of the allegations.

A spokesman for the special counsel declined to comment beyond what is in Monday’s filing.

This is not the first time Manafort has been called out by the special counsel for breaching the terms of his deals with them. In June, Manafort was sent to jail pending his then-upcoming trials after investigators accused him of witness tampering. The decision in the U.S. attorneys’ favor from U.S. District Court Judge Amy Berman Jackson revoked Manafort’s $10 million bond.

Mueller is investigating Russia’s attack on the 2016 election as well as potential ties between the Kremlin and President Donald Trump’s campaign. Trump has repeatedly denied that his campaign colluded with the Russians to undermine the campaign of Democrat Hillary Clinton.

Manafort had faced prosecution by Mueller in two separate cases, one in Washington, D.C., the other in Virginia. In September, Manafort cut a deal with Mueller’s team and agreed to plead guilty to charges related that he was engaged in a conspiracy involving money laundering, tax fraud, failing to report foreign bank accounts, violating rules requiring registration of foreign agents, lying and witness tampering. The deal came a few weeks after a jury in Virginia found him guilty on several counts of financial fraud.

The charges lodged by Mueller’s team largely relate to Manafort’s work for a pro-Russia political party in Ukraine, which he performed years before he joined the Trump campaign.

Manafort was also one of the Trump campaign officials to attend a June 2016 meeting with Russian government-connected operatives at Trump Tower in New York, which was coordinated by Donald Trump, Jr. in the hope of hearing what was claimed to be damaging information about Clinton. Trump’s son-in-law and current senior advisor Jared Kushner also attended that meeting.

On Monday, prosecutors said that under the terms of the plea deal, Manafort was required to be “fully, truthfully, completely, and forthrightly” cooperative with the government. The filing said that agreement stipulated that if Manafort failed to meet his obligations, the government would be relieved of its obligations. That would include its agreement to reduce sentencing guidelines in exchange for acceptance of responsibility.

The White House did not immediately respond to a request for comment.

Last week, lawyers for Trump said they had submitted the president’s written answers to the special counsel.

“The questions presented dealt with issues regarding the Russia-related topics of the inquiry,” said Jay Sekulow, one of Trump’s lawyers and a conservative radio host. Neither the specific questions nor the answers have yet been made public, and it remains unclear whether Mueller’s team plans to send follow-up questions to Trump or request that he sit down for an in-person interview.

Below is the full text of the status report:

The United States of America, by and through Special Counsel Robert S. Mueller, III, and Paul J. Manafort, Jr., by and through counsel, respectfully submit this joint status report to request, in light of recent developments, that the Court direct the preparation of a Presentence Investigation Report and schedule sentencing in this matter, as well as set a schedule for any pre-sentencing submissions and motions.

The government reports that:

1. On September 14, 2018, one business day before jury selection was scheduled in this matter, defendant Paul J. Manafort, Jr., pleaded guilty to a superseding information, charging him with two criminal conspiracy counts that encompassed all the criminal conduct alleged in the Superseding Indictment in this district. As the Court is aware, that criminal conduct occurred over a decade, up through April 2018.

2. Manafort pleaded pursuant to a plea agreement that required his “fully, truthfully, completely, and forthrightly” cooperating with the government. The plea agreement provides that if the defendant fails to fulfill completely “each and every one” of his obligations under this agreement, or “engages in any criminal activity prior to sentencing,” the defendant will be in breach of the agreement. A breach relieves the government of any obligations it has under the agreement, including its agreement to a reduction in the Sentencing Guidelines for acceptance of responsibility, but leaves intact all the obligations of the defendant as well as his guilty pleas.

3. After signing the plea agreement, Manafort committed federal crimes by lying to the Federal Bureau of Investigation and the Special Counsel’s Office on a variety of subject matters, which constitute breaches of the agreement. The government will file a detailed sentencing submission to the Probation Department and the Court in advance of sentencing that sets forth the nature of the defendant’s crimes and lies, including those after signing the plea agreement herein.

4. As the defendant has breached the plea agreement, there is no reason to delay his sentencing herein.

The defendant reports that: