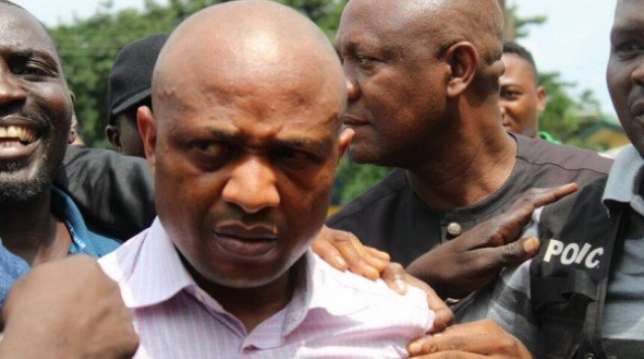 The Lagos State Government had brought a fresh five-count charge bordering on conspiracy to kidnap, kidnapping and attempted murder against Evans and three others.

The Lagos State Government had brought a fresh five-count charge bordering on conspiracy to kidnap, kidnapping and attempted murder against Evans and three others.

The case is before Justice Adedayo Akintoye.

The News Agency of Nigeria (NAN) reports that the arraignment was first stalled on Nov. 13 because Evans’s counsel was not served with the fresh information.

Also, one of the three persons charged along with Evans had no legal representation.

When the case came up on Friday, the prosecution counsel , Ms Titilayo Shitta-Bey, prayed for an adjournment.

“This matter is for arraignment of the defendants; unfortunately due to the absence of Evans’ counsel, Mr Olukoya Ogungbeje, I don’t think it will be possible.

“Ogungbeje just brought a letter to the court this morning stating that he is at the Court of Appeal and asking for a stand-down of the matter till noon.

“We don’t know when he will be here; even when he comes, the third defendant’s counsel, Mr Jude Igbanoi, is new to this matter and will need time to familiarise himself with the proof of evidence.”

“I, therefore, ask the court for a short adjournment,’’ Shitta-Bey said.

All the defendants’ counsel did not object to the application for adjournment.

Igbanoi, who is representing the third defendant, Okpara, had earlier informed the court that he was new to the case and would need time to familiarise himself with the proof of evidence.

Akintoye adjourned the case until Jan. 22, 2018 for hearing.

NAN reports that the alleged kidnap kingpin was arrested on June 10.

NAN also reports that Evans was in August arraigned before Justice Hakeem Oshodi at an Ikeja High Court over kidnapping.

He has also been arraigned before Justice Oluwatoyin Taiwo of Igbosere High Court, Lagos.