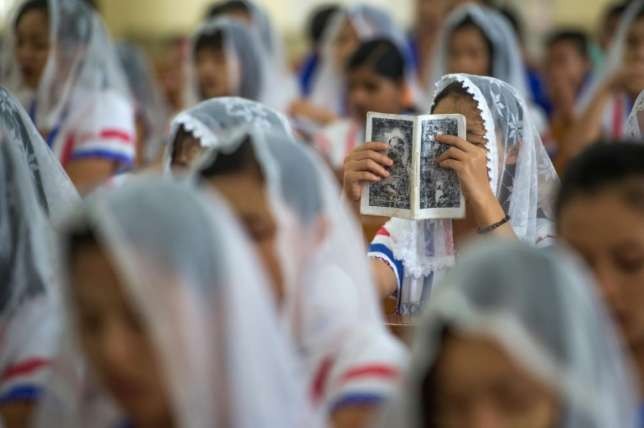 A fiery brand of Buddhist nationalism is burning brighter than ever as Myanmar braces for its first ever papal visit.

A fiery brand of Buddhist nationalism is burning brighter than ever as Myanmar braces for its first ever papal visit, posing a challenge to the message of religious tolerance Pope Francis is expected to preach next week.

A wing of extremist monks have been stirring Islamaphobia in Myanmar for years, earning a reputation as incubators of “Buddhist terror”.

But their cause has received new support since August, when the army launched a brutal crackdown on the Muslim Rohingya, expelling more than half a million from the country.

Global outrage over the violence — which the UN and the US have called ethnic cleansing — has triggered an ultra-nationalistic reflex inside Myanmar, pushing the public towards firebrand monks who have long cast the Rohingya as ill-intentioned outsiders.

“Our ideas have now won the vast majority of the population,” said Ottama, a prominent monk in Buddhist nationalist circles.

Speaking to AFP in a temple in Yangon, the saffron-robed monk repeated a well-worn falsehood that Muslims are poised to “swallow the nation” in a demographic assault on Myanmar’s Buddhist majority.

“Fifty years ago, only 12 percent people in Myanmar were Muslim. Now their population is about 38 percent,” he said.

That fraction has been chiselled down further by the latest violence in Rakhine state, which has pushed over half of the 1.1-million Rohingya into Bangladesh.

The pope, who will head to Bangladesh after Myanmar, has thrown himself into the centre of the crisis rippling across the two nations’ border.

In Yangon he will press for peace in masses expected to draw hundreds of thousands from the country’s Catholic community.

But he will also meet with Myanmar’s civilian leader Aung San Suu Kyi and army chief Min Aung Hlaing — a highly symbolic sit-down between a peace icon and a general whose troops are accused murder, rape and arson.

All in the name

play Ottama, a prominent monk in Buddhist nationalist circles, reads a book at the temple in Yangon

Francis is already in the crosshairs of Buddhist hardliners for expressing sympathy for the Rohingya, whom he has referred to as “brothers”.

His public comments in Myanmar will be closely scoured for any mention of the group by name — the term is rejected by the army, government and many in the Buddhist public, who insist the Muslims are “Bengalis”.

“I do not understand why the Pope is coming in the middle of a conflict, many people say he’s coming for the Bengalis,” Nyo Nyo Aung, a follower of an ultra-nationalist monk, told AFP.

Myanmar’s Catholic leaders have advised the Pope not to use the ‘R-word’, a path Suu Kyi has also taken to avoid triggering backlash from Buddhist nationalists, a powerful political bloc.

Myanmar’s Buddhist clergy has taken some steps to rein in radical members, including banning notoriously Islamaphobic monk Wirathu from giving sermons for one year, though with little enforcement.

A few days before the pope’s visit, another prominent ultra-nationalist abbot, Parmaukkha, was detained over an anti-Rohingya protest he organised in 2016.

But those moves have done little to draw the toxicity from anti-Rohingya hatred pinballing across social media in the form of rants, memes and grotesque cartoons.

This hyper-nationalism stretches back to Myanmar’s British colonial past, when the mass migration of people from South Asia caused economic and social tensions, according to Burmese historian Thant Myint-U.

“It created a sour, defensive nationalism, and remains at the heart of Myanmar’s political DNA,” he said.

Analysts warn the animus threatens to unpick fragile democratic gains in the former junta-run country and have chastised Suu Kyi for failing to use her moral authority to defend the Rohingya.

The Nobel laureate has avoided dangerous political territory by not condemning the army crackdown that sparked the refugee crisis.

The Pope’s visit will test that intransigence.