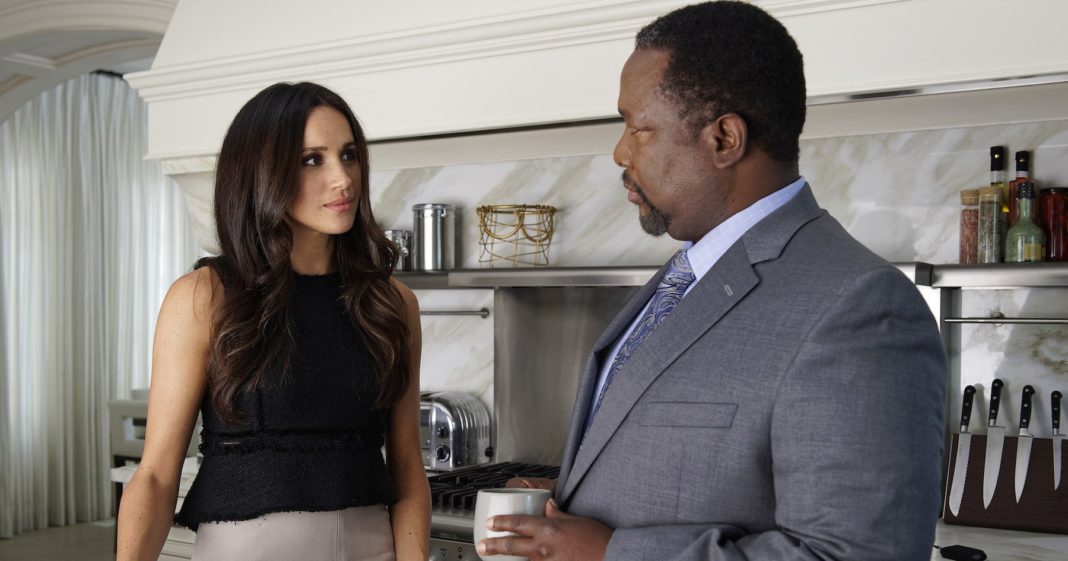 The Zane family forever! Duchess Meghan’s dad on Suits, Wendell Pierce, sent her well wishes as her due date nears.

“It’s great to be living & working in London while the excitement builds around the Duchess of Sussex soon giving birth to her first child,” the 55-year-old, who starred as hotshot lawyer Robert Zane on the USA Network drama, tweeted on Monday, April 8, alongside a photo of the London Bridge. “Meghan I’m very happy for you. Blessings.”

The Wire alum, who attended Meghan’s wedding to Prince Harry at Windsor Castle in May 2018, previously opened up about working with her on their hit legal series. “She is really wonderful,” he told Extra in September 2018 of the Los Angeles native, 37, who portrayed savvy paralegal-turned-legal associate Rachel Zane for seven seasons from 2011 to 2018.

Pierce, who is currently in London to star in Deal of a Salesman, also admitted that he “didn’t think” Meghan’s romance with Harry, 34, “was real, then all of a sudden, I turn around and there is a guy from MI5 on set every day,” he said of the British security and counter-intelligence agency. “The one thing that was clear [was that] she was extremely happy. She had a glow. I knew she was in love. With the whirlwind of publicity and the world of being a royal now, the one thing that’s constant is the fact that I know she loves him.”

Us Weekly exclusively revealed in May 2017 that the former Tig blogger, who will give birth in late April or early May, received special attention while shooting Suits after news of her relationship with the Duke of Sussex broke.

A source told Us at the time that Meghan’s name was removed from shooting schedules due to “security issues” on set. “Information was leaking out of Suits like crazy,” explained in the insider. “As soon as it came out that they were dating, everyone was warned to stop talking or they would be fired.”

The ninth and final season of Suits is expected to premiere on the USA Network in the summer of 2019.