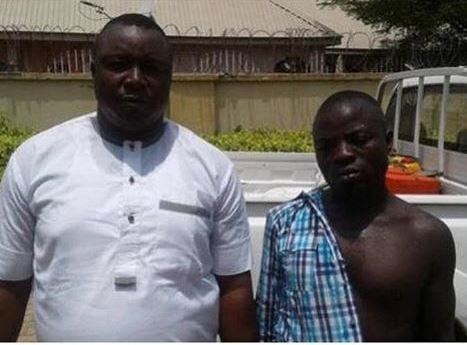 Nigeria secret police, the Department of State Services (DSS) has announced the arrest of one Jonah Abbey aka Jonah IDI which it described as a notorious gunrunner alongside his driver, Agyo Saviour aka Dan-Wase.

DSS, in a statement released on Sunday, said ABBEY has been on its wanted list for the last 10 years over arms and ammunition trade before his arrest on March 13, 2018 in Wukari town in Wukari LGA, Taraba State.

The Service said the gunrunner has been supplying weapons to criminal groups in Bayelsa, Ebonyi, Rivers, Imo, Anambra, Plateau, Nasarawa, and Benue/Taraba axis, including the notorious criminal syndicate led by Terwase AKWAZA aka Ghana in Benue State.

DSS added that recent intelligence indicated that Abbey moved arms and ammunition from Konduga in Borno State into Taraba State through his driver, SAVIOUR.

“It may be noted that subject has entrenched his criminal activities in different parts of the country. Indications are that he sources arms from the Republic of Cameroon and parts of the North-East of Nigeria,” DSS said.

Share
Facebook
Twitter
WhatsApp
Pinterest
Linkedin
ReddIt
Email
Print
Tumblr
Telegram
Mix
VK
Digg
LINE
Viber
Naver
Previous article‘You were born in the gutter and you will die in the gutter’ – Reno Omokri and Femi Fani-Kayode drag the heck out out each other on Twitter over Atiku Abubakar and “Fulani Herdsmen”
Next articleAnto evicted from the Big Brother Naija house!