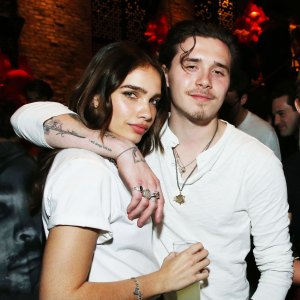 “Brooklyn’s family really loves her,” a source tells Us Weekly exclusively. “She fits in perfectly.”

According to the insider, Cross, 21, “has a similar vibe” to the family, which stems from her British background. “Her and Victoria get along very well,” the source dished.

According to The Sun, Brooklyn introduced his new lady love to his mom and dad as far back as December, meeting up with the famous pair at the at the Haig Club House Party in Notting Hill. 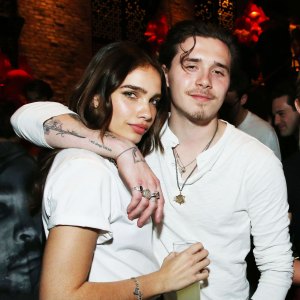 The aspiring photographer, 20, was first spotted with the model that same month, though a source told Us that they began dating two months prior. The source also revealed that the pair were introduced by his cousin, Libby Adams.

Brooklyn’s ex-girlfriend Chloë Grace Moretz, from whom he split in September 2016 after years of on and off dating, told Us in November 2017 that she and the fashion designer, 44, also got on “very, very well,” noting that she geeked out a bit upon meeting her.

“I think if anyone didn’t say that [they fangirled] when they met her, that would be shocking,” she told Us at the time.

Moretz, 22, added of Victoria: “I think she’s one of the most incredible, important, smart, sophisticated businesswomen and mothers that I’ve ever met. She’s a real heart and a real beautiful person.”

The Spice Girl has been known to be protective when it comes to her son.

David Beckham revealed in 2015 that his wife made him chaperone Brooklyn’s very first outing with a girl! “On his first date, which, he was about 14 and a half, Victoria was actually in London, and it was Valentine’s Day,” the retired soccer player, 43, told James Corden on The Late Late Show With James Corden. “So [Brooklyn] said, ‘I’d love to take this girl to dinner.’ I said, ‘OK, great.’ [Victoria] said, ‘OK, make sure you take him. Then, make sure you sit in the restaurant.’”