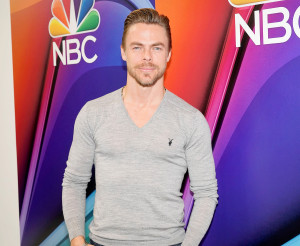 Derek Hough may not be up to date with World of Dance costar Jenna Dewan’s dating life, but it’s safe to say he’s delighted that she’s seemingly found love again after her split from estranged husband Channing Tatum.

Jenna Dewan and Channing Tatum: The Way They Were

“I don’t know about this,” the 33-year-old told Us Weekly at the NBC press brunch for the dance competition show on Friday, November 16, when asked about Dewan’s new beau, Steve Kazee, adding that he hasn’t met him yet.

“I don’t know what’s going on, I am so out of the loop,” Hough added. “But if she is, I’m wildly happy for her. She is the most incredible woman.” 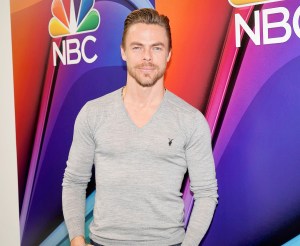 Us Weekly revealed that Dewan, 37, was dating again in October, shortly after she filed for divorce from Tatum, 38. (The Witches of East End alum and Magic Mike star split in April 2018 after nine years of marriage and share 5-year-old daughter, Everly.)

Later that month Us confirmed Dewan’s new man is the 43-year-old Tony award-winner.

“I don’t talk about my personal life, but thank you! I am very happy,” Dewan told Us in November when asked about Kazee.

The Broadway star — who is gearing up for his role in the live stage production of Love, Actually — spoke to Us earlier this month about all things love and romance.

Dewan and Kazee haven’t shied away from packing on the PDA since news of their relationship broke. The two were spotted locking lips during a hand-in-hand stroll in Beverly Hills on Friday, November 16. Days prior, they stepped out together in Cabazon, California.

“It was very obvious they were together,” an onlooker told Us of their outing. “He was following her around everywhere, and they were very cute together. They did not show PDA, but they definitely looked lovey-dovey and were laughing together and seemed truly happy. They were just like a normal and casual couple.”