Deontay Wilder says he will get in the ring and go face to face with Anthony Joshua if he beats Joseph Parker in Cardiff.

The WBC heavyweight world champion will be ringside as part of the Sky Sports Box Office team for the huge unification fight between the WBA ‘super’ and IBF holder, Joshua, and WBO champion Parker at the Principality Stadium, on March 31. 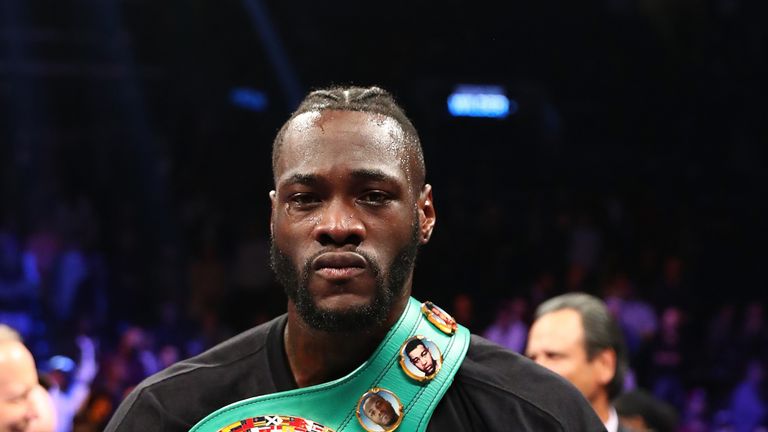 People want to know what’s going to happen next. I am an unpredictable person, I do what people don’t expect me to do but I do things when it’s the right time for me to do them. You’ll see.

Wilder is certain he will take care of Luis Ortiz on March 3, live on Sky Sportsand will not only be commentating in Wales, but will gladly square-up to Joshua if the Brit wins.

“I will get in the ring and go face to face with him,” Wilder exclusively told Sky Sports.

“That will be amazing and I hope he is anticipating seeing me and people are anticipating two tough guys getting in the ring. We will call this the preview. This will let people see what our fight will be like.

“It typifies the show as well, because people want to know what’s going to happen next. I am an unpredictable person, I do what people don’t expect me to do but I do things when it’s the right time for me to do them. You’ll see.

“I enjoyed myself the first time I came over to work with Sky Sports and I am certainly looking forward to doing it again.”

Wilder could also bring his WBC belt with him, because “it will look good on my shoulder as I’m commentating”, which would mean all four recognised straps will be on display.

The ‘Bronze Bomber’ believes Parker “does have what it takes to beat Joshua” and become the unified heavyweight world champion, but admits he wants his British rival to win the WBA ‘super’, IBF and WBO titles, so they can meet later this year.

“I wouldn’t dare curse that he loses because people want to see the best fight the best. I want the heavyweight division to stay lit up as it has been and stay exciting like it is.

“I don’t dislike Anthony Joshua. I don’t hate the guy, I actually like him, just as much as I like Tyson Fury.

“I think he has done a tremendous job with what he’s done in his country and I am proud to see they are praising another black man for his accomplishments because you just don’t see that much these days.

“Being that he’s a champion and I am a champion it’s about time the division had one champion. One guy that takes it all, just one master of the division, one king on the throne and that’s why I really want this fight to happen.”

Chelsea monitoring Olivier Giroud status
Man narrates how he did his wedding introduction on the day he met his wife for the first time
Wilder vs Ortiz: Deontay Wilder’s toughest test
America is changing. Bigoted slurs, immigration bans and racist rallies can’t change that
Joshua vs Parker: Heavyweight unification bout a sell-out
British boxer, Tyson Fury cleared to resume his boxing career after accepting a backdated two-year doping ban
Anthony Joshua warns Deontay Wilder to be ‘realistic’ with his demands
2019: ‘Buhari is either a bloody liar or a forgetful old man’ – Rotimi Akinola writes
Amosun, Dalung, Mohammed to cheer Joshua fight
Where Is America’s Next Wilder
Haye will be completely fit for rematch with Bellew – Hearn
Maheeda goes topless in racy Instagram photos
We’ll facilitate Joshua’s visit to Nigeria – Ogun govt
‘No Nigerian representative at the burial of the 26 young Nigerian ladies that drowned in the Mediterrenean sea’ AFP journalist, Trisha Thomas reveals
In US Government sternly criticizes Romanian justice plans
Premier League Merseyside misery as Liverpool and Everton lose heavily Defensive frailty has long been a problem for Liverpool and they found themselves 2-0 down inside 12 minutes as Spurs…
Photos: See this 8-year-old Ugandan boy who owns a motorcycle repair workshop
‘Mark my words, money will fail in 2019 elections’ – Fela Durotoye
Anthony Joshua Boxer knocks out Takam to retain world heavyweight titles
‘I am appealing to you to try to restrain your people’ – President Buhari tells Governor and elders from Benue state
- Advertisement -
Share
Facebook
Twitter
WhatsApp
Pinterest
Linkedin
ReddIt
Email
Print
Tumblr
Telegram
Mix
VK
Digg
LINE
Viber
Naver

The Unexpected Thing Patrick Mahomes And Tom Brady Have In Common