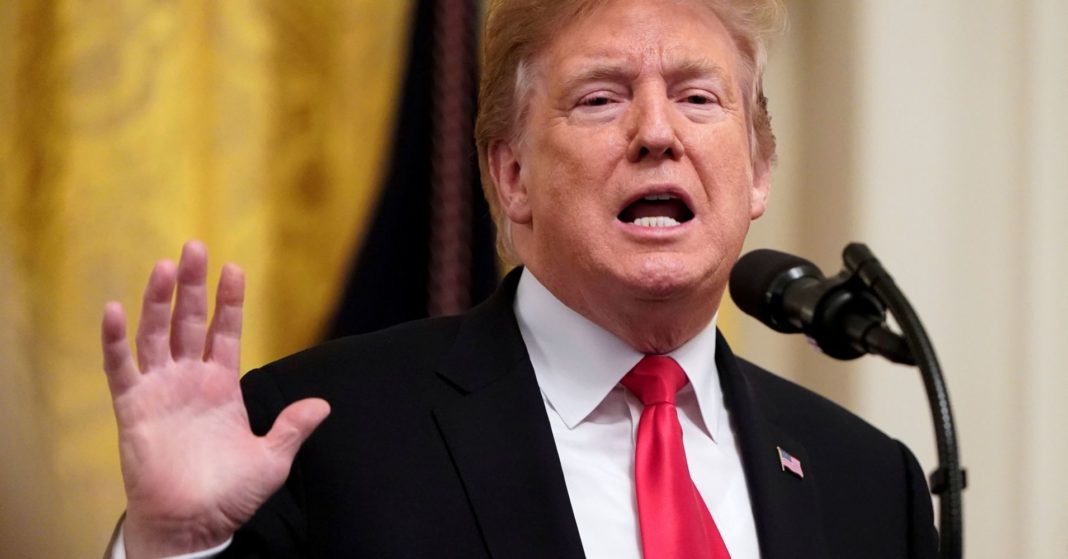 A fight brewed between Democrats and Republicans over the public release of special counsel Robert Mueller’s report on Russian meddling in the 2016 U.S. election, while President Donald Trump kept up attacks on his critics on Monday.

As the Senate Judiciary Committee’s Republican chairman called for an investigation into the origins of the probe of any Trump campaign links with Russians, the Senate leader blocked a second attempt by Democrats to pass a measure aimed at pushing the Justice Department into full disclosure of the report.

Six committee chairs in the Democratic-led House of Representatives called on U.S. Attorney General William Barr, in a letter seen by Reuters, to release the full Mueller report to Congress by April 2. Earlier this month, the House voted 420-0 in favor of making the report public, with no Republican opposition.

Barr on Sunday released a four-page summary of conclusions of the investigation that detailed Russian interference but cleared the Republican president’s campaign team of conspiring with Moscow.

A person familiar with the matter said there were no plans at this time to show the Mueller report to the White House.

Trump on Monday vented his anger at the inquiry and vowed investigations into unnamed political enemies who did “evil” and “treasonous things.” The probe left unresolved the question of whether Trump engaged in obstruction of justice.

Senator Lindsey Graham, the Republican Senate Judiciary Committee chairman, and a Trump ally told reporters he would ask for an investigation. Barr told Graham in a telephone call that he would be willing to testify to the panel about the Mueller probe, according to a spokesman for the senator.

Republican U.S. Senate Majority Leader Mitch McConnell, noting that it took nearly two years for Mueller to conduct his investigation, said after blocking the Democratic measure: “It’s not unreasonable to give the special counsel and the Justice Department just a little time to complete their review in a professional and responsible manner.”

Trump said on Monday that “it wouldn’t bother me at all” if the report were released but that it was up to Barr.

The end of the Mueller inquiry did not spell the end of the investigative pressure on Trump by Democrats, who gave no indication of easing up on their multiple congressional investigations into his business and personal dealings.

Democratic lawmakers were likely to face a protracted legal battle that will turn on Trump’s right to keep communications with his advisers private, legal and political experts said.

One of Trump’s lawyers, Jay Sekulow, said at least part of the report should be withheld.

Sekulow said it “would be very inappropriate” to release the president’s written answers to questions posed by the special counsel, calling the responses provided in November confidential. After lengthy negotiations, Trump reversed his previous stance that he would be willing to submit to an in-person interview with the Mueller team, ultimately agreeing only to provide written answers.

The president and his allies in Congress went on the offensive as the summary gave him a political victory ahead of his 2020 re-election bid, with no allegations of criminal wrongdoing brought against him.

“There are a lot of people out there that have done some very, very evil things, very bad things, I would say treasonous things against our country,” Trump told reporters at the White House, without mentioning anyone by name or citing specific actions.

Trump pledged new investigations but did not specify who would conduct them or who should be targeted. Trump in the past has called for investigations of Hillary Clinton, the Democrat he defeated in 2016.

In an appearance on NBC’s “Today” program, Sanders said: “The media and Democrats have called the president an agent of a foreign government. That is an action equal to treason, which is punishable by death in this country.”

Asked if Trump owed Mueller an apology, Sanders added: “I think Democrats and the liberal media owe the president and they owe the American people an apology.”

Trump had repeatedly accused Mueller, a former FBI director, of running a “witch hunt” with a team of “thugs” and having conflicts of interest. But asked on Monday if Mueller had acted honorably, Trump said: “Yes.”

Mueller, who submitted his confidential report on his findings to Barr on Friday, neither accused Trump of obstruction of justice in trying to impede the investigation nor exonerated him of obstruction, according to the summary.

Barr said he and Deputy Attorney General Rod Rosenstein, who appointed Mueller, concluded the investigation’s evidence “is not sufficient to establish that the president committed an obstruction-of-justice offense.”

The Mueller investigation had cast a cloud over Trump’s presidency but he has declared himself fully exonerated, despite what Barr’s summary said on the obstruction of justice issue.

On March 5, Mueller visited the Department of Justice’s main office in Washington to meet with Barr and Rosenstein and told them he would not be reaching a conclusion with respect to obstruction, a decision that was unexpected, a department official said.

The Kremlin said on Monday that President Vladimir Putin was ready to improve ties with the United States following the release of Barr’s summary and called on Washington to formally recognize there was no collusion. Russia repeated its denial of U.S. intelligence agencies’ findings that it meddled in the election.

Mueller, in previous legal filings, described a Russian campaign to interfere in the election through hacking and propaganda to sow discord in the United States, harm Clinton and boost Trump. Mueller charged 12 Russian intelligence officers, 13 other Russians accused of taking part in a disinformation campaign and three Russian companies.