Cosby Rape Trial Goes To The Jury; Defense Called Only One Witness 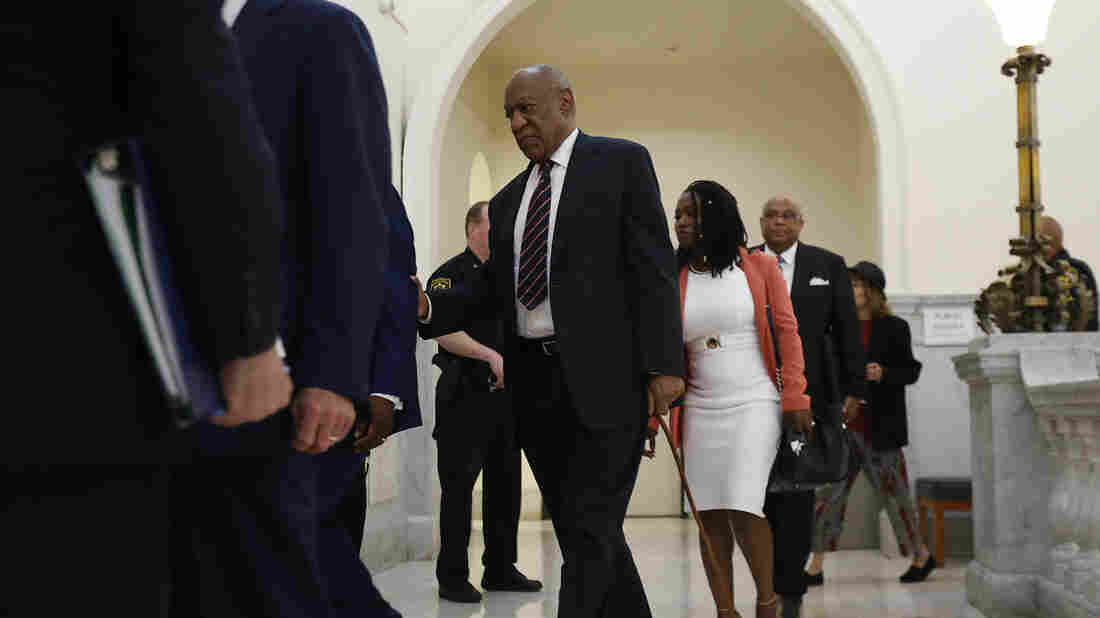 Bill Cosby returns to the courtroom following a break in his trial Monday in Norristown, Pa. A former Temple University employee alleges that Cosby drugged and molested her in 2004 at his home in suburban Philadelphia. The defense team rested after just six minutes. David Maialetti-Pool/Getty Images hide caption

Bill Cosby returns to the courtroom following a break in his trial Monday in Norristown, Pa. A former Temple University employee alleges that Cosby drugged and molested her in 2004 at his home in suburban Philadelphia. The defense team rested after just six minutes.

Jury deliberations resume Tuesday in the sexual assault trial of comedian Bill Cosby, after the prosecution and defense presented their closing arguments on Monday. Jurors deliberated for four hours before stopping for the night.

Cosby is accused of drugging and sexually assaulting Andrea Constand at his home near Philadelphia in 2004. Cosby has been accused of raping or assaulting dozens of women, often after offering or slipping them drugs. By the time the stories became public knowledge, the statute of limitations had expired on most of the cases; Constand’s case is an exception.

The Associated Press provides some background:

“Constand, 44, testified … that Cosby gave her three blue pills and then penetrated her with [his] fingers against her will as she lay paralyzed and half-conscious. She sued Cosby after prosecutors in 2005 declined to press charges.

“Cosby testified over a decade ago as part of her lawsuit, eventually settling the case for an undisclosed sum. His deposition was sealed for years until a judge released parts in 2015 at the request of The Associated Press, prompting a new set of prosecutors to take a fresh look at the case.

“Cosby was charged a year and a half ago, just before the statute of limitations was set to run out.”

Last week the prosecution spent days laying out the case against Cosby, calling 12 witnesses to the stand. As NPR reported last week, Constand testified, telling her story in public for the first time. She spent nearly seven hours on the stand over two days, as Cosby’s attorneys attempted to undermine her credibility.

On Monday, the defense moved through its case — quickly, reports Laura Benshoff of member station WHYY.

“Cosby’s lawyers spent only a few minutes asking a local detective whether or not he was aware of the entertainer’s vision problems in 2005,” Benshoff reports:

“In closing, lead defense attorney Brian McMonagle called the accuser’s statements a ‘stone cold lie.’ … The defense spent more than an hour rehashing its claims that Cosby and Constand were in a romantic relationship, and implying that she concocted the assault with the help of attorneys.”

Cosby did not take the stand, and the defense rested after just one witness.

Constand was in the courtroom for the defense’s closing arguments on Monday, as was Cosby’s wife, Camille Cosby, Reuters reports:

“McMonagle argued that Cosby was guilty of infidelity but no crime.

“McMonagle focused on Constand’s shifting story, pointing out that she changed her estimate of when the alleged assault occurred several times in speaking with police in 2005.

” ‘She’d remember it for the next 365 days and all the days of her life if there were a sexual assault in this case,’ the attorney said.”

Prosecutors said that Cosby, at his deposition more than a decade ago, admitted to giving Constand pills (Cosby said it was Benadryl) and touching her sexually.

“Ladies and gentlemen, he has told you what he has done,” District Attorney Kevin Steele said in his closing argument, according to Reuters. “It is about as straightforward as you are ever going to see in a sex crimes case. … If you have sexual relations with somebody when they’re out, when they’re asleep, when they’re unconscious, that is a crime.”

If convicted, Cosby could spend the rest of his life in prison, the AP notes.