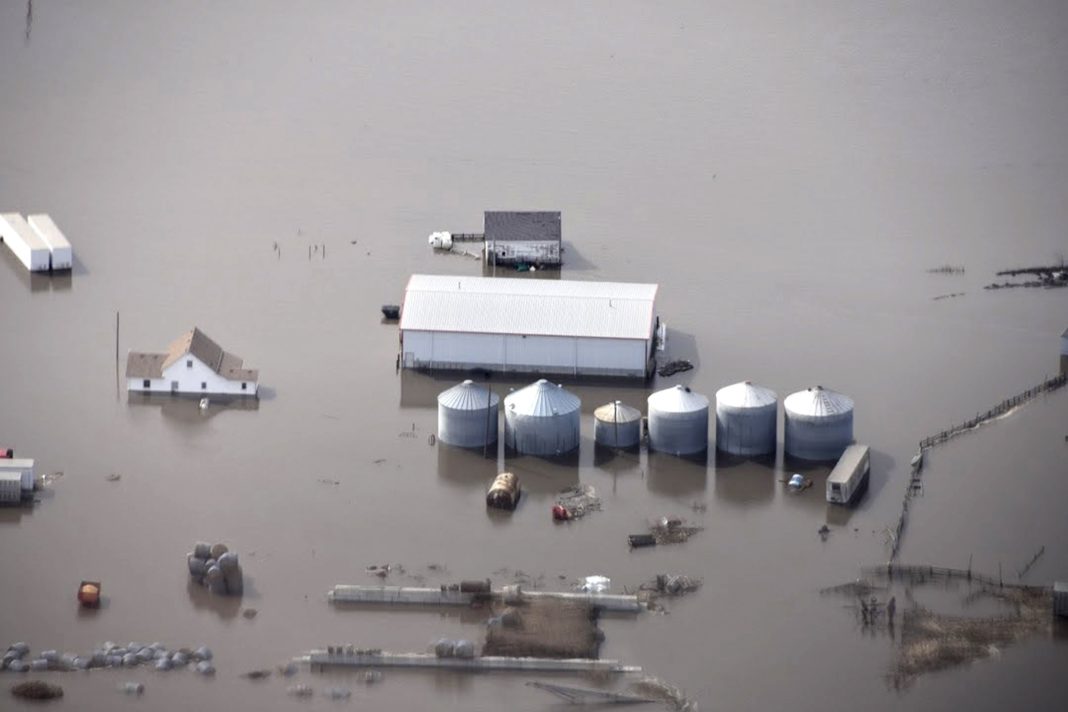 This Monday, March 18, 2019 file photo shows flooding and storage bins under water on a farm along the Missouri River in rural Iowa north of Omaha, Neb.

Flood waters receded in portions of the nation’s Midwest in the past week, but the weather forecast calls for heavy rain and severe thunderstorms over the next few days that could further complicate matters for farmers.

The flooding and wet weather this spring has caused delays in planting crops across the nation’s heartland and led the U.S. Department of Agriculture this week to cut its projections for corn production to a four-year low. Farmers went into June with planting progress at its slowest pace in nearly four decades.

As of Sunday, farmers had planted 83% of the corn crop, well below the five-year average of 99%, according to the USDA. The soybean crop was 60% planted, down from the 88% average.

The later planting means the crops are considered more susceptible to risk of injury and lower yields from summer heat and early fall frost damage. Also, some producers may switch to shorter season varieties of corn and soybeans, but that also comes at the risk of lower-yielding crops.

“We’re talking about a dozen states affected across the Plains and Midwest in some way by varying degrees of flooding and wetness,” said Brad Rippey, a meteorologist at the USDA. “The March flooding was Iowa and Nebraska but since then we’ve seen it expand westward to South Dakota, and then eastward into Michigan, Ohio and Indiana.”

Meantime, dry weather this week allowed some farmers to make progress on planting. But wet weather is forecast for this weekend in some areas of the Midwest that could cause headaches for farmers.

“Farmers are working night and day to plant corn and soybean crops where the ground is dry enough,” Arlan Suderman, chief commodities economist at INTL FCStone, said in a research note.

According to the National Weather Service, thunderstorms and heavy rainfall are forecast in parts of Oklahoma, Texas as well as into Kansas late Friday. Also, there’s the possibility of heavy rains and flash flooding on Saturday in portions of Missouri, Iowa, and Nebraska.

Suderman said the window to plant corn and soybeans “will largely close for the rest of the month starting this weekend if the forecasts verify, although a few spots will likely miss rains to allow a bit more progress.”