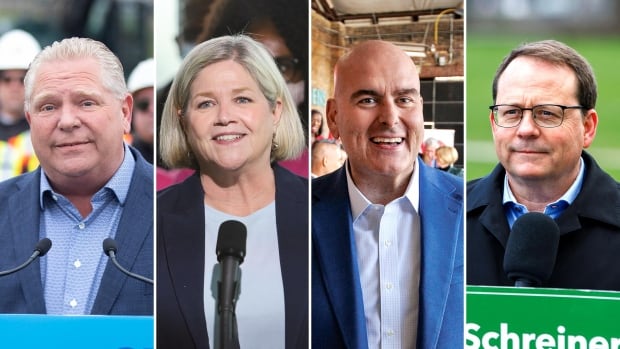 The Progressive Conservatives have been the consistent front-runners, according to the CBC News Ontario Poll Tracker, with another majority in their sights.

The New Democrats are on track to win the second-most seats, though potentially with a smaller share of the popular vote than the Liberals. The Ontario Greens may pick up a second seat at Queen’s Park.

While not an exhaustive list, here are eight races CBC News will be watching closely this week and on election night.

Nearly all of Brampton is a major battleground in this election, with extremely small margins of victory in three of its five ridings in 2018.

The New Democrats won Brampton North by just 497 votes over their closest competitors, the PCs. That MPP, Kevin Yarde, lost the party’s April nomination for this election and represented the riding as an Independent for less than two weeks before the campaign began.

The NDP, PCs and Liberals have all made Brampton North a priority on the campaign trail. The New Democrat candidate, Sandeep Singh, was joined by federal NDP Leader Jagmeet Singh when he officially opened his campaign office in May.

Progressive Conservative Leader Doug Ford made his first stop of the campaign in Brampton North, alongside PC candidate Graham McGregor. At least one publicly available poll has the PCs as front-runners here.

Meanwhile, the Liberal candidate, Harinder Malhi, previously represented the area before the riding boundaries were redrawn.

This riding in the far southwestern corner of Ontario could be one to watch on election night, with a close battle expected between the New Democrats, who won Essex in 2018, and the PCs, who were narrowly edged out. Together the two parties accounted for more than 90 per cent of the vote share in the riding.

Interestingly, neither of the candidates who ran for those two parties is back on the ballot this time around. New Democrat Taras Natyshak, who had held the seat since 2011, is not running again. Tory candidate Chris Lewis, who lost by just 2,711 votes, was subsequently elected as an MP for the riding’s federal counterpart.

Both parties have made clear they believe they can win in Essex, but a potentially complicating factor for the PCs is the popularity of minor right-of-centre parties in southwestern Ontario. The New Blue and Ontario Party are collectively polling at around eight per cent in the region, higher than anywhere else in Ontario, according to Poll Tracker. That support could bite into the PCs’ vote share come election night.

If 2018 was any indication, the race in Ottawa West–Nepean could prove interesting.

PC incumbent candidate Jeremy Roberts won by just 175 votes last time around, narrowly beating out New Democrat candidate Chandra Pasma and ending the Liberals’ 15-year hold on the riding. The NDP had never previously taken more than 16 per cent of the vote in this riding, yet doubled that in 2018.

Pasma is on the ballot again, and both the NDP and Liberals seem to think the seat can be flipped. NDP Leader Andrea Horwath and Liberal Leader Steven Del Duca have each visited the riding multiple times in the last two weeks of the campaign.

There are also questions about local resentment toward the incumbent PCs after a deadly storm devastated parts of the Ottawa area on May 21. Ford has not been to Ottawa since the campaign started, though he is expected to visit the city on Monday.

The Green Party is putting much of its hopes for expanding its caucus of one at Queen’s Park in this riding, a longtime Progressive Conservative stronghold. Former PC MPP Norm Miller held the seat for nearly two decades but announced he would retire from politics last year. The PCs tapped Graydon Smith, the mayor of Bracebridge for the past 12 years, to replace Miller on the ballot.

But the Greens believe that their candidate, Matt Richter, can pull out a win. It is Richter’s fifth time running for the seat. A local school teacher in the area, Richter won just over the 20 per cent of the vote in 2018. The Greens have campaigned hard in the riding, with Leader Mike Schreiner personally visiting more than half a dozen times.

The Greens may be helped by the fact that the Liberals don’t have anyone on the ballot. The party was forced to drop their local candidate after it was revealed he published a book detailing scientifically baseless views on homosexuality.

Both the PCs and Greens insist they are confident they will ultimately win the seat, though the few riding-level polls published for Parry Sound–Muskoka have no consensus on who’s leading.

PC incumbent Ross Romano won this northern Ontario seat in 2018 by a margin of 414 votes over NDP candidate Michele McCleave-Kennedy, who is also running again. Together the pair accounted for nearly 83 of the total vote share.

Ford visited Sault Ste. Marie often as premier, and made a point to stop in the city during the campaign.

Horwath was supposed to be there on Saturday as part of a last-minute whirlwind tour of the north that was earlier postponed after she tested positive for COVID-19. Trouble with the plane the campaign was supposed to take meant her appearance had to happen via livestream.

The original Liberal candidate for Sault Ste. Marie was dropped after inappropriate comments he made in an online gaming forum surfaced in the media. The party was able to replace him with a new candidate, Liam Hancock, before the Elections Ontario deadline.

This northwestern Ontario riding was the scene of one of the closest races in 2018.

NDP candidate Judith Monteith-Farrell edged out four-term Liberal incumbent Bill Mauro by just 81 votes, or 0.3 per cent of the vote. It marked the first time since 1985 that the Liberals had not held at least part of the territory that is now encompassed by the riding boundaries of Thunder Bay–Atikokan.

June 2 is expected to be another faceoff between the New Democrats and Liberals. Monteith-Farrell is running again, while Robert Barrett is on the ballot for the Liberals.

Del Duca visited Thunder Bay on May 22 to campaign alongside Barrett. This is another riding that Horwath intended to visit over the last weekend of the campaign, but her in-person appearance was scrapped due to mechanical trouble with the plane the campaign had chartered.

The stakes are high in this riding for Del Duca.

Del Duca was the MPP for Vaughan–Woodbridge for nearly six years before he was routed by current PC incumbent Michael Tibollo in 2018. He lost by nearly 8,000 votes after serving in several cabinet posts in former premier Kathleen Wynne’s government.

Throughout the campaign, Del Duca and his camp have maintained a stoic confidence that he will retake the seat on June 2. The PCs, however, have said that their own internal polling shows Tibollo firmly ahead. Tibollo served as a cabinet minister throughout the PC government’s four-year term but was twice demoted to lower-profile posts.

If Del Duca fails to win the seat, there will be serious questions about whether he can stay on as Liberal leader.

Incumbent New Democratic candidate Faisal Hassan won this west Toronto seat by 1,165 votes in 2018, with only about three and eight per cent of the vote share separating him from the PCs and Liberals, respectively.

All three parties think they have a shot of securing the riding on June 2. The wild card could be the name recognition of the PC candidate, namely Michael Ford — the nephew of the PC leader and a Toronto city councillor.

The Ford political brand holds serious weight in that part of the city, and large parts of York South-Weston share similar demographics with Etobicoke North, where Doug Ford won with more than 50 per cent of the vote in 2018.