Chris Brown to sue rape accuser after release from custody

“Loyal” singer Chris Brown reportedly plans to sue the woman who accused him of raping her.

On Tuesday, Jan. 22, 2019, Chris Brown’s attorney, Raphael Chiche, confirmed to Entertainment Tonight that his client wants to file a lawsuit against the alleged victim. Chiche — who signed on to represent Brown after he was detained for “aggravated rape and drug infractions” in Paris, France on Monday, Jan. 21, 2019 — said his client “vigorously challenges the charges against him.” He added, “A complaint for slanderous denunciation will be filed tomorrow with the Public Prosecutor of Paris.”

Brown himself also denied the allegations in a since-deleted Instagram post, writing (via People), “I WANNA MAKE IT PERFECTLY CLEAR…… THIS IS FALSE AND A WHOLE LOT OF CAP [sic]!” The entertainer then addressed his daughter, Royalty, stating, “NNNNNNNNEEEEEEEEEEVVVVVVVVVVEEEEEERRRRRR!!!!!! FOR MY DAUGHTER AND MY FAMILY THIS IS SO DISPRESPECTFUL [sic] AND IS AGAINST MY CHARACTER AND MORALS!!!!!”

News of Brown’s plans to sue comes after he was released from police custody on Jan. 22 (via CNN). The Paris prosecutor’s office told the Associated Press that charges haven’t been filed against Brown, but the investigation is said to still be ongoing.

As Nicki Swift previously reported, Brown’s accuser said she met the singer and members of his entourage on the night of Monday, Jan. 15. The group reportedly hung out at club Le Crystal in the city’s 8th arrondissement, before heading over to the Mandarin Oriental Hotel. French celebrity magazine Closer reported (via NPR) that, upon returning to the hotel, Brown allegedly raped the woman in his suite. The accuser claimed that Brown’s friend and the celebrity’s bodyguard also assaulted her. Those two men have since been released along with Brown, according to Variety.

Amid Brown’s legal trouble, some of his famous friends took to social media to lend their support. “No one can touch you ur the GOAT,” singer Justin Bieber reportedly said in the comments section of a video Brown shared on his Instagram page on Jan. 22 (via Hollywood Life). Rapper T.I. took aim at Brown’s accuser, writing on Instagram, “She should face the same scrutiny and punishment as he would have if he did it.”

The real reason Darius Rucker is splitting from his wife of... 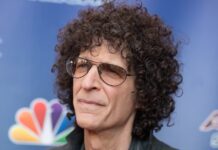 This is how much Howard Stern is really worth

Previous articleHuawei exec: ‘Some political guys’ are trying to drag down business, but we’re still confident
Next articleLady Gaga remarks on A Star Is Born co-star Bradley Cooper’s Oscar snub