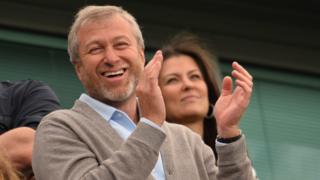 The Russian-Jewish billionaire owner of Chelsea football club, Roman Abramovich, has flown to Tel Aviv after being found eligible for Israeli citizenship.

Immigration officials told the BBC that he was interviewed last week at the Israeli embassy in Moscow. He has faced delays in renewing his UK visa.

His spokesman would not comment on reports citizenship had been granted.

Mr Abramovich, 51, would be the richest person in Israel.

His UK investor visa reportedly expired some weeks ago but the British government has refused to comment on his individual case.

The delay in issuing him a new one comes amid increased diplomatic tensions between London and Moscow after the poisoning of former Russian spy Sergei Skripal in southern England.

Mr Abramovich did not attend the FA cup final at Wembley earlier this month when Chelsea beat Manchester United.

Israeli media reports say he has been given an identity card in Israel under the Law of Return, which allows Jews to become citizens of Israel.

The Times of Israel said the interior ministry had confirmed Mr Abramovich arrived in Israel on Monday and that he had emigrated to the country.

He is a frequent visitor to Israel and bought a hotel in Tel Aviv in 2015 that reports say he has turned into a residence.

Israel passport holders are allowed to enter Britain without a visa for short stays.

Mr Abramovich is worth $11.5bn (£8.6bn), according to Forbes magazine. The move could pay off financially as new Israeli citizens are exempt from paying tax on foreign income for 10 years.

Who is Roman Abramovich?