Casualties as train derails in India 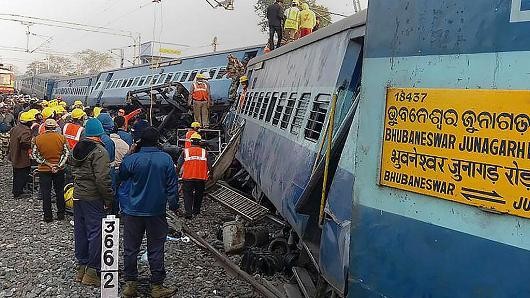 At least a dozen people were injured when an express train derailed in north India on Saturday, media reports and authorities said.

Police said the casualties were being rushed to hospital, but they were unable to give numbers or say whether any had died.

One media report said 15-20 people had been injured and there were fears of fatalities.

“There are certainly casualties but right now the focus is on evacuation,” senior police officer Jitender Kumar told AFP by phone from the accident site.

“We are shifting everyone to the hospital. We are trying to take out those trapped inside the coaches.”

Photographs from the scene in the north Indian state of Uttar Pradesh showed people climbing onto upended carriages to try to pull passengers out.

The accident is the latest disaster to hit India’s most populous state and comes just a week after dozens of children died at a hospital that had run out of oxygen.

India’s railway network is still the main form of long-distance travel in the vast country, but it is poorly funded and deadly accidents often occur.

Less than a year ago 146 people died in a similar disaster in Uttar Pradesh.

A 2012 government report said almost 15,000 people were killed every year on India’s railways and described the loss of life as an annual “massacre”.