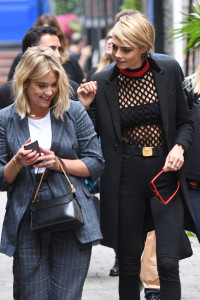 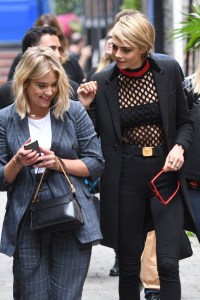 No time for hate. Cara Delevingne and her girlfriend, Ashley Benson, clapped back against trolls who criticized their love on Instagram.

A hater took to the photo-sharing platform to call the model, 26, “so disrespectful” and to tell the Pretty Little Liars alum, 29, that she “deserves better.” A second Instagram user then commented that Benson should “stay away from that devil” because she is not “gay.”

The second commenter added, “You love men and you need one.”

The Spring Breakers actress fired back at the latter troll and wrote, “You need to mind your own business. Stop making things up.”

Delevingne, for her part, addressed both haters with her reply. “You are f—king disgusting! If you have a problem with true love then come and say this s—t to my face instead [of] pathetically hating through Instagram,” she wrote. “I genuinely feel sorry for you both, you are clearly not happy with your lives and have far too my time on your hands. Maybe get a hobby that doesn’t involve being homophobic and hating others for being happy.”

The pair first sparked romance rumors in August 2018 after they were spotted leaving Kylie Jenner’s birthday party together. The speculation was fueled days later when they were photographed kissing at an airport in London.

A source told Us Weekly in October 2018 that the women, who met on the set of the upcoming film Her Smell, “are dating” and are “very happy” together. “This is the first girl [Ashley’s] ever dated,” the insider explained. “This relationship with Cara is the first time she’s been in a healthy relationship and she feels as if it’s really easy with her.”

Benson and Delevingne had a date night at London’s Winter Wonderland theme park in December where an eyewitness saw them “kissing” while waiting on a roller coaster. The onlooker revealed, “Cara and Ashley were running like kids excited kids onto the coaster. Cara was holding Ashley’s hands.”