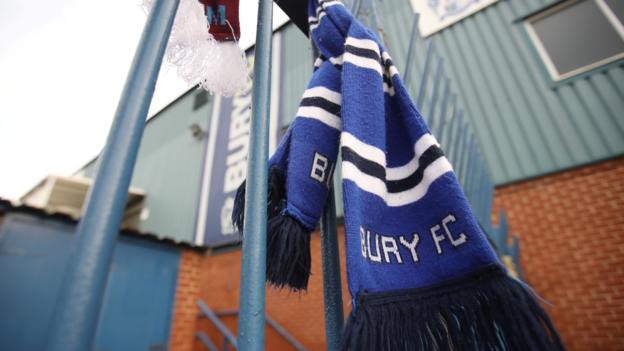 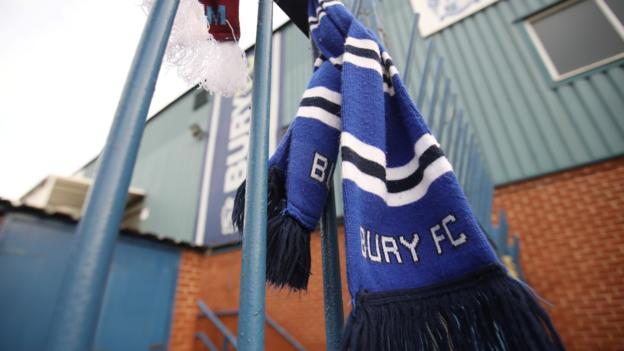 A proposal for Bury to be readmitted to League Two next season was rejected by the English Football League’s 71 member clubs at a meeting on Thursday.

Bury, who were in League One, were expelled from the EFL in August after a last-ditch takeover bid collapsed.

On Friday, a group trying to rescue Bury submitted a plan for “compassionate re-entry” to League Two.

However, an EFL statement said “it became clear that the proposal did not have the necessary support”.

It added that EFL clubs’ “preferred direction of travel” was “extending the existing principle of a reduction in relegation across all divisions as a means of returning to 72 clubs now and for the future”.

EFL executive chair Debbie Jevans said: “While we are saddened that Bury FC is no longer part of the EFL, the board’s difficult decision to withdraw membership was only taken after every opportunity to find a resolution was exhausted.

“Since then, in recognition of the efforts made on behalf of the club, the EFL has engaged with supporters’ groups, shared their submissions with our members and debated at length the issues raised.

“Following the discussion today, clubs have established that the preferred direction of travel is to reduce relegation from League Two as a means of returning to 72 clubs.

“The clubs felt that, in a difficult situation, this approach maintains fairness for all members and upholds the principle of the football pyramid.”

Two-time FA Cup winners Bury, founded in 1885 and elected to the Football League nine years later, will now have to apply to the Football Association for a place in non-league football.

The “Bury FC Rescue Board” – backed by local MPs, the Mayor of Greater Manchester and supporters’ group Forever Bury – wrote to the EFL to plead for the club’s reinstatement, with confirmation of “active bidders” and a signed statement from owner Steve Dale pledging to sell the club.

Bury North MP James Frith said on Twitter that it was “devastating to hear self-interest was served cold by many EFL clubs” at Thursday’s meeting.

How did it come to this?

At the end of April, Bury were celebrating promotion back to the third tier of English football, but they were already enduring a torrid time off the pitch.

The club was already in financial trouble when Dale bought it for £1 in December from previous owner Stewart Day, with players and staff often being paid late.

A winding-up petition filed against the club was adjourned three times before eventually being dismissed by the High Court on 31 July.

By then, creditors had approved a company voluntary arrangement (CVA) put forward by Dale, which was proposed to help settle some of their debts.

The CVA meant unsecured creditors, including HM Revenue & Customs, would be paid 25% of the money owed – but also triggered a 12-point deduction in the League One table under EFL rules.

However, the EFL were unsatisfied Bury had given enough evidence of their financial viability, leading to a string of postponed fixtures while the organisation awaited “the clarity required”.

On 9 August, the Shakers were given a 14-day deadline to provide the necessary information or face expulsion but they were unable to comply and were expelled from the EFL on 28 August when a takeover bid by C&N Sporting Risk fell through.

Also at Thursday’s meeting, clubs “gave their endorsement” to the proposed appointment of Rick Parry as chairman of the EFL.

Former Premier League and Liverpool chief executive Parry was recommended as successor to Ian Lenagan by the EFL board.