Derby County captain Richard Keogh out for season after crash 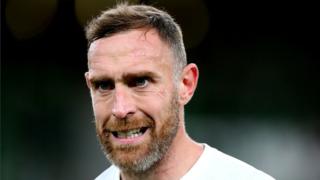 Derby County captain Richard Keogh has been ruled out until the end of the season due to a knee injury sustained in a crash that led to two of his team-mates being arrested.

Tom Lawrence and Mason Bennett have been charged with drink-driving following the accident in the city’s Allestree area on Tuesday night.

Police said a Range Rover Sport and a Mercedes GLC had collided.

In a statement, Derby County said the crash followed a team-building dinner.

“A small group, including the team captain Richard Keogh, continued drinking into the night,” the statement said.

“They should have known when to stop and also ignored the opportunity to be driven home using cars laid on by the club, and chose to stay out.”

The club added that those involved “know they will pay a heavy price for their actions” but also said they would be supported with their “rehabilitation back into the squad and team”.

Mr Bennett, 23, of Whaley Thorns near Mansfield, and Mr Lawrence, of Duffield, are due to appear at Southern Derbyshire Magistrates’ Court on 15 October.

Derbyshire Police said neither man was seriously injured, although 25-year-old Wales international Mr Lawrence was taken to hospital as a precaution.