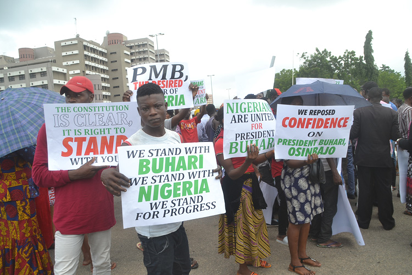 By Johnbosco Agbakwuru & Joseph Erunke
Two groups of pro and anti-Buhari protesters, yesterday, hit the streets of Abuja to either support or lash out at the President who is currently on medical leave in London, United Kingdom.

President Muhammadu Buhari travelled on medical vacation to London on May 7 and his continued stay there has generated so much controversies in the polity, to the extent that some Nigerians have even called for his removal from office for staying out of the country for too long.

The protests were relatively peaceful, as the police kept watch over both groups, contrary to what transpired on Tuesday when security men dispersed the anti-Buhari protesters, operating under the aegis of ‘’Our Mumu Don Do’’ with water canon and teargas. Members of Centre for Civil Society and Justice and other support Group protesting in support of President Muhammed Buhari at Unity Fountain Abuja. Photo by Gbemiga Olamikan.

While the group, ‘’OurMumuDonDo, led by the convener, Deji Adeyanju, and one of its leaders, Charles Oputa, popularly known as Charly Boy, said they were on the streets to asked the President to either resume work or resign and also make public the cause of his illness, the other group, under the platform of Center for Civil Society and Justice, CCSJ, led by Comrade Prince Goodluck Obi Nelson, said the President should be left alone to recover fully from his ailment and continue his fight against corruption.

Although Charly Boy and his group were dispersed by the police on Tuesday, the group continued  its protest, yesterday, sitting out at the Unity Fountain. Insisting that the President resigned or resume work.

While this group was sitting out at the Unity Fountain, the pro-Buhari group also stormed the same venue to declare their support for the President.

Obi Nelson, who addressed his group, quoted President Buhari popular phrase ‘’if we don’t kill corruption, corruption will kill us.”  He said all the President needed was the support of Nigerians to enable him tackle the problem of graft in the country.

According to him, Nigeria will not make any progress, if the problem of corruption is not solved.

The pro-Buhari protesters, mostly women and young ladies, were armed with placards bearing several inscriptions, and chanting solidarity songs that conveyed their loyalty and support for the ailing President.

Some of the placards read: ‘’The system is working, no cause for alarm’’;  ‘’we repose confidence in President Muhammadu Buhari’’;  “our President is recuperating, Nigeria is moving forward.”

They also declared their support for the acting President, Prof. Yemi Osinbajo, saying he had done well so far.

After some hours at the venue, they continued their protest march through the streets of Abuja to Aso Rock gate, with armed policemen providing cover.

Nobody can derail anti-graft war —Presidency

Addressing the protesters at the precinct of Aso Rock, Senior Special Assistant to the President on Media and Publicity, Garba Shehu, said no amount of pressure or blackmail would frustrate the anti-corruption war of the present administration. Members of Centre for Civil Society and Justice and other support Group protesting in support of President Muhammed Buhari at Unity Fountain Abuja. Photo by Gbemiga Olamikan.

He described as illegal, recent protest by the “Our Mumu-don-do” group that called on President Muhammadu Buhari, who is on medical vacation in London hospital, to resume work or resign, saying the protest was designed to scuttle the corruption fight.

He also praised Nigerians for rising against the resume or resign protesters, dismissing such demands as unlawful.

He dismissed the “return or resign” agitation as an illegal assembly stealthily organized to deliver a blow to the war against corruption.

He said: “It might be taken for granted that the beneficiaries of the old order are fighting back. We have been warned that corruption will fight back. In a country where just one woman for having the opportunity to serve as minister has N47.2 billion and $487.5 million of public resources in cash and property traced to her by the Economic and Financial Crimes Commission, EFCC, you don’t expect the beneficiaries of that order to allow the Buhari administration some peace.

“They want to distract us. But what the Acting President wants to assure patriotic citizens is that the government will not bend.

“As far as the President is concerned, he has done the needful by handing the reins of authority to the Vice President. Since the law of the country does not give a time limit for the President’s return, it cannot be imposed by a saber-rattling group or individuals.’’

Speaking on behalf of the protesters, the convener, Comrade Goodluck Obi, said his group had absolute faith and trust in President Buhari’s administration, not machinations of corruption and destabilization.’’ Obi said:  “We are saying from today, August 10, 2017, we will be holding a rally/protest march here at Unity Fountain for the next one month and beyond in order to send clear and unambiguous message to agents of chaos and unity, that Nigerians are solidly behind President Muhammadu Buhari’s administration, based on our democratic mandate entrusted to him on March 28, 2015.”

The protest by Charly Boy’s group started on Monday, as the protesters urged the President to either resume work or resign, having stayed away from the country for over 90 days, seeking medical attention in London. It was generally peaceful.

However, the protest went violent on Tuesday when the police fired teargas at the protesters, saying the dispersal of the protesters was to stave off a situation where miscreants would hijack it to molest the public.

In the ensuing melee, Charly Boy fainted and was taken to hospital for treatment.  Convener of the protest, Deji Adeyanju chided the government for unleashing the police on harmless citizens demanding to know the health status of their President.

Adeyanju contended that the President was not a private person whose health status should be kept away from the citizens.

‘’This government only has a hammer, so everything appears to be a nail.  They do not understand that the people have the right to ask about the health status of the President. The President is not a private citizen, he is a public official elected by the people and he is accountable to the people of Nigeria.’’

On his part, Charly Boy insisted that the group would not back down on its call for the President to resume or resign, the attack by the police notwithstanding.

Narrating his ordeal, the entertainer said:  “Before we knew it, they started with the water cannon. Then they tear-gassed us and set their dogs against us. Worried, I went to one of the policemen who was standing near me and asked him why they resorted to such action. Instead of responding to me, he suddenly raised the butt of his gun and hit me in the eye.”

Buhari has broken no law — Senate

However, the Senate quickly issued a statement to back the President, saying he had broken no law, having constitutionally handed over power to his deputy, Prof, Yemi Osinbajo, as acting President.

Reacting to the Senate’s position, Charly Boy said the lawmakers had demonstrated that they are nothing but a rubber stamp of the executive arm of government.

President Buhari travelled to London  on medical vacation since May 7, and had said repeatedly that he would return to the country as soon as his doctors gave him the signal to do so. Meanwhile, the Presidency has urged Nigerians to ignore calls for ailing President Muhammadu Buhari to return to work or resign his position.

Garba Shehu, a presidential spokesperson, said activists who took to the street to protest Mr. Buhari’s prolonged absence have a right to do so, but that they “overstepped their bounds” by trying to force the President’s hands.