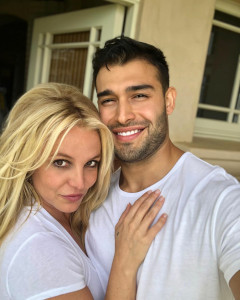 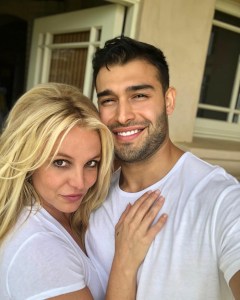 Leaning on her man. Britney Spears got sentimental about her boyfriend of more than two years, Sam Asghari, on Instagram amid her fight to end her father Jamie Spears’ conservatorship.

The pop star, 37, shared a sweet series of photos of herself and her beau, 25, cuddled up and smiling in matching white T-shirts. “I love this man,” she captioned the shots.

The model also shared the photos on his Instagram page, adding two superhero emojis to his caption.

Asghari has been supportive of the “Luv Me” singer during her recent mental health struggles — the former Mouseketeer underwent a voluntary 30-day stint in a treatment facility in April, with the personal trainer cheering on her journey.

The couple is “more in love than ever“: “Even though Sam is younger than Britney, he is extremely mature for his age,” the source told Us in July 2018, adding, “Don’t be surprised if they get engaged in the next year.”

There’s a potential wrench in any would-be marriage plans, however: Britney is unable to wed Asghari — or anyone else — without her father Jamie’s approval. “Britney can’t get married unless Jamie approves it, and Jamie is inclined not to, because it would only [create complicated] legal issues,” a source told Us in March. 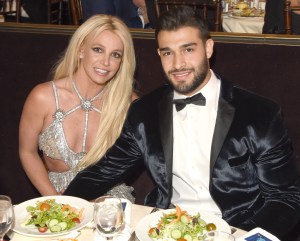 The Grammy winner would also need to clear any prenatal decisions with Jamie. “She’d have to get her dad on board for that too,” the insider quipped.

The judge at the hearing ordered a 730 evaluation of the singer —the first step in potentially ending the conservatorship.