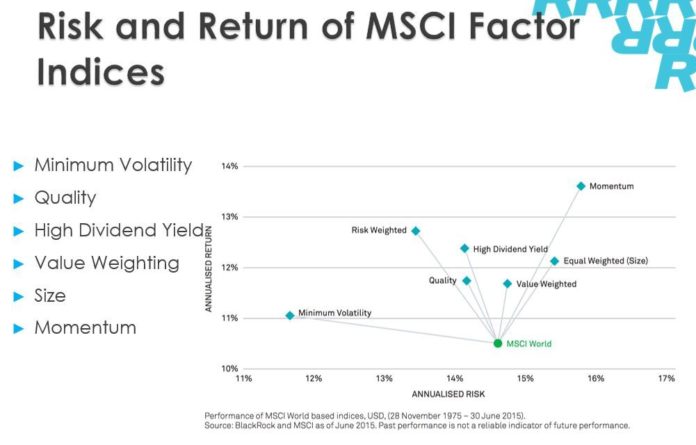 While smart beta is the hottest thing in the exchange-traded fund world, bond portfolios have yet to catch on. But BlackRock Inc. doesn’t mind being early to that party.

Drawn in by their growing liquidity, tax efficiency and low fees, U.S. investors funnelled a net $70 billion to bond ETFs in the first half of the year, nearly as much as they added in all of 2016, according to data compiled by Bloomberg. Those flows have largely been confined to market-capitalization weighted funds however, and not to smart beta products, which have proved far stickier with stock investors. Bond buyers continue to have faith in active managers and some remain skeptical of ETFs that use the strategies, said Rob Nestor, head of iShares smart beta at BlackRock.

“It’s very early, but we’re OK with being early,” said Nestor. “A lot of the same factors that have become much more widely known in the equity space also play out in the fixed income space. It’s going to come down to education and understanding.”

The new ETFs use alternative weightings to chase “superior risk adjusted and total returns” compared with market-cap weighted products, according to BlackRock’s website. The high-yield ETF excludes issuers with relatively high default probabilities and weights the remaining bonds by their default-adjusted spreads on the theory that investors often overprice riskier securities.

“We feel that people are more concerned about avoiding defaults with high yield, so there’s a bigger emphasis on quality there,” said Nestor. The investment grade ETF, symbol IGEB, applies similar screens to a universe of bonds rated BBB or higher.

The good news for BlackRock is that they have “an army of salespeople” who can hawk the products to users of its flagship bond funds, said Todd Rosenbluth, director of ETF and mutual funds at CFRA. Still, “active hasn’t been as damaged on the fixed income side, so it’s not like iShares will necessarily attract the frustrated active fixed income investor,” he said.

The most important market news of the day.

Get our markets daily newsletter.

Smart beta bond ETFs hold just a fraction of the assets of passive equity funds, with around $14 billion compared with more than $500 billion in stock products, according to data compiled by Bloomberg Intelligence. The iShares Edge U.S. Fixed Income Balanced Risk ETF, an early smart beta bond fund, has amassed $120.5 million since its launch — a dud by BlackRock standards. The firm’s products take in about $100 million every 45 minutes, according to Eric Balchunas, a Bloomberg Intelligence analyst.

The new funds also break with tradition by tracking a self-designed index rather than one created by a third party. For buyers who may potentially be interested in the products, transparency and availability of information will be key, said Joseph Smith, a portfolio manager at CLS Investments LLC in Omaha, Nebraska.

“I think the caution that we have is that they’re self-indexed,” said Smith. “Some of our pain points include asking how available and transparent the index information will be versus an ETF that just has a third party provider.”