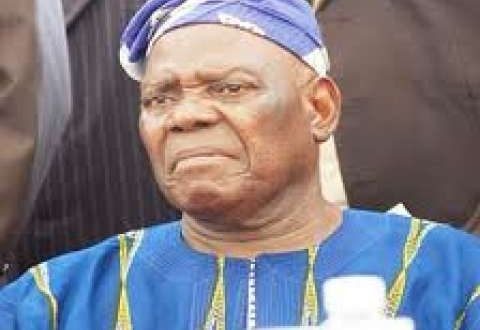 Governors and other prominent people yesterday, commiserated with Chief Bisi Akande, a former Governor of Osun State and Chieftain of the All Progressives Congress, APC, over the death of his wife, Omowunmi.

Omowunmi passed on Tuesday night at the University College Hospital in Ibadan at the age of 73. However, the cause of her death has not been revealed by the family.

Reacting to the development, Osun State Government said the news of Mrs Akande’s death was shocking and sudden.

In a statement signed by the Commissioner for Information and Strategy, Mr Adelani Baderinwa, the state condoled with Akande and prayed to God to give the family the fortitude to bear the loss of their lovely wife and mother.

condolence visit: From left; Ogun State Governor, Ibikunle Amosun; National Leader of the All Progressives Congress (APC) Asiwaju Bola Tinubu and former National Chairman of the APC, Chief Bisi Akande during a condolence visit to Akande over the demise of his wife, Omowunmi in Ila-Orogun, Osun State…yesterday.

He described Mrs Akande as hard-working; a true and quintessential mother, an enterprising woman, a loving wife and caring person to all and sundry.

The Governor in a condolence message signed by his Chief Press Secretary, Mr. Habib Aruna, described late Omowunmi as an epitome of humility, uprightness and one who was a pillar of support for her husband.

Omowunmi Akande
For Oyo State Governor, Senator Abiola Ajimobi, the death of the APC stalwart is painful and disheartening.

In a statement by his Special Adviser on Communication and Strategy, Mr. Yomi Layinka,  the news of Mama Akande’s death was received with rude shock. He said the deceased was a pride to womanhood and pillar of support to her husband.

“In the face of the ups and downs in Baba Akande’s political odyssey, Mama stood by him like a strong pillar. For the 51 years that they had been together as husband and wife, she never wavered in keeping the home front together,’’ the governor said.

On his part, the Ondo State governor, Rotimi Akeredolu, described the deceased as a disciplined, God-fearing and understanding woman who stood behind her husband to record landmark successes in both private and public services.

According to a statement signed by the his Chief Press Secretary, Segun Ajiboye, the governor asked the Akande family, the people of Osun State and Nigerians to take solace in the fact the deceased lived a good and fulfilled life.

In the same vein, Speaker, Lagos State House of Assembly, Mr. Mudashiru Obasa has described the death of late Mrs. Akande, as a great loss.

Obasa in his condolence message disclosed that woman died when her wisdom and words of advice are still needed noting that those who have come in contact with her will attest to her humility, wisdom, care and courage especially the solid support she had provided for her husband all through.

Also, the Minister of Mines and Steel Development, Dr Kayode Fayemi has commiserated with former Osun State Governor and former Interim National Chairman of the All Progressives Congress (APC), Chief Bisi Akande, over the death of his wife, Madam Omowunmi Akande.

Dr Fayemi, in a statement by his Special Assistant on Media, Mr Yinka Oyebode, said the passing of Madam Akande was sad and devastating.

The Minister described the late Madam Akande as a truly virtuous woman, a pillar of support to her husband and a humble, loving and compassionate woman who related well with family, friends and political associates of her husband.