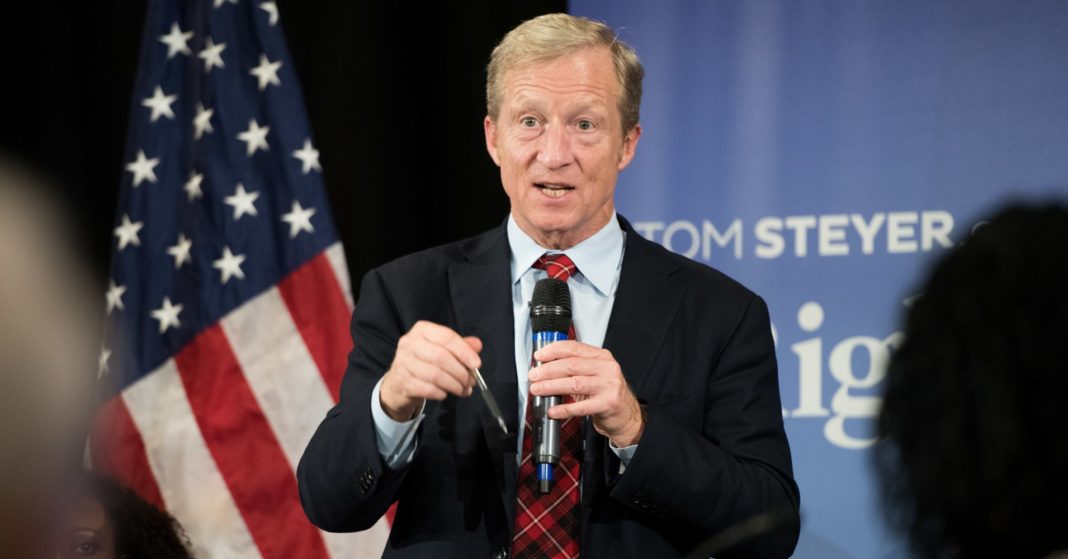 Billionaire Democrat Tom Steyer is planning to visit the early presidential caucus and primary states of Iowa, New Hampshire and Nevada as he considers running for president in 2020, CNBC has learned.

Steyer is among a large list of potential candidates for the Democratic Party’s nomination in 2020. Massachusetts Sen. Elizabeth Warren threw her hat into the ring when she announced an exploratory committee on Monday. She is set to visit Iowa this weekend. Other possible candidates are expected to announce their plans over the next few weeks.

Steyer’s tour could be a make-or-break stretch for his presidential ambitions. The billionaire generated name recognition by imploring congressional leaders to impeach President Donald Trump. His organization Need to Impeach’s petition has received over 6.5 million signatures. It isn’t certain, however, whether Steyer’s message resonated with Democrats, since recent polling shows him at the bottom of the pack of prospective 2020 candidates.

Steyer will be traveling in the early part of this year to Des Moines, Iowa; Las Vegas; and a city in New Hampshire as part of his larger “5 Rights” tour, Aleigha Cavalier, his chief spokeswoman, said in an email. In a follow-up email, she declined to name the New Hampshire city and noted that Steyer’s team would be announcing details in coming weeks.

While it is unclear the exact dates of when Steyer will be hosting his next set of town hall meetings, the original press release describing his platform said he planned to travel to “host a series of conversations” in December and January. Steyer unveiled the “5 Rights” after investing $120 million into the 2018 congressional midterm campaign, helping Democrats recapture the House of Representatives.

“We need to redefine what it means to be free in the 21st century, to make sure we all have a fair chance at success in America,” Steyer says on his website. The rights championed by Steyer are: the right to a living wage, the right to an equal vote, the right to clean air and water, the right to learn, and the right to health care. The liberal billionaire, though, has made it clear that he has yet to make a decision on whether will run for president in 2020.

Steyer already made his way to South Carolina, another early primary state.

In an interview early last month with The Post and Courier after the panel discussion in Charleston, Steyer kept the door open for a 2020 run and noted he would make a decision in the coming months.

“This is not about me. This is not about my personal ambition. I am extremely ambitious to be part of the group of people to get this country back on a decent path: prosperous, equitable and safe,” he told the newspaper.

Steyer isn’t the only billionaire considering a run for president. Former New York Mayor Mike Bloomberg is contemplating a campaign. Bloomberg’s closest political advisor recently told CNBC he would likely spend over $100 million on his own operation if he did run.

So far, Steyer has failed to catch on with Democratic voters.

In a recent CNN poll asking who is the preferred Democratic nominee for president, Steyer came in at 0 percent. Those who led in the poll include former Vice President Joe Biden, left wing Sen. Bernie Sanders of Vermont and Texas Democratic rising star Beto O’Rourke. The poll was conducted with over 1,000 participants, including 463 self-identified Democrats and Democratic-leaning independents. The survey has a margin of error of at least 3.8 percentage points.