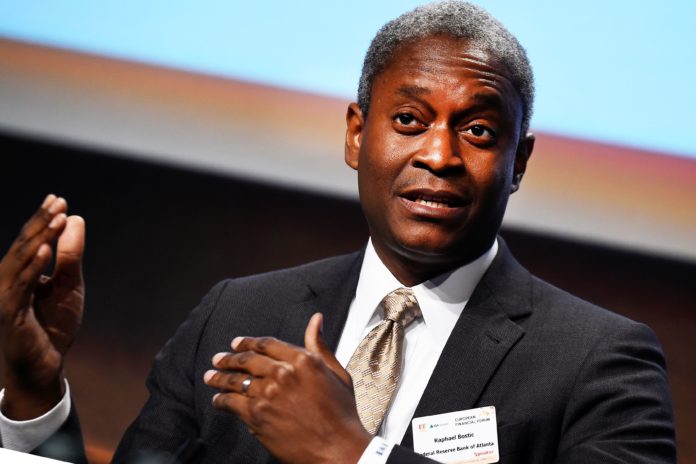 Bostic expressed confidence in the economy, and in the Fed’s position on monetary policy, during an interview Monday with CNBC’s Steve Liesman on  “Squawk Box.”

“The market is ahead of where I am,” he said. “I would say I’m not expecting a rate cut to be imminent, certainly not by September. Things would need to happen in order for that to play out.”

Indeed, traders in the fed funds futures market and Fed officials have been at odds this year on the future direction of rates.

The market is pricing in about a 48% chance of a rate cut by September and a 73% chance of a move lower before the end of the year. In fact, traders see a 31% chance of two cuts before 2019 comes to an end.

For their part, Fed officials have projected neither a cut nor a hike for the remainder of the year. In separate speeches, members of the policymaking Federal Open Market Committee, of which Bostic is a nonvoting member, have expressed confidence in the “patient” approach the Fed has adopted this year.

“In general, my view is as long as we don’t see inflation running away, that would the sign that our policy is basically at a neutral level,” he said. “We could sustain that for a long time and we don’t have to move.”

One obstacle for the Fed has been its consistent inability to hits its 2% target rate. The central bank’s favored inflation gauge is hovering around a 1.6% average, despite a decade of low rates and easing programs aimed at accelerating activity and driving up price pressures and wages.

However, Bostic said he’ largely unconcerned about the situation. Fed Chaiman Jerome Powell said after the last FOMC meeting that he saw the downward inflation pressures as “transient” and likely to ease.

“I’m not super-concerned about that today, and mainly it’s because when you look at inflation expectations, they haven’t started to trail away in a significant way away from our target,” Bostic said. “If I started to see a trend moving away to one and a half or one and a quarter [percent] for inflation expectations, then I’d be concerned. But right now, I don’t see our lack of hitting that target … as being a material failure.”

As far as the economy overall goes, Bostic said he sees growth as still solid though decelerating from 2018’s 3% or so pace. In his district, he sees consumers and business owners as “confident,” “excited” and “very pleased with the way things are going.”