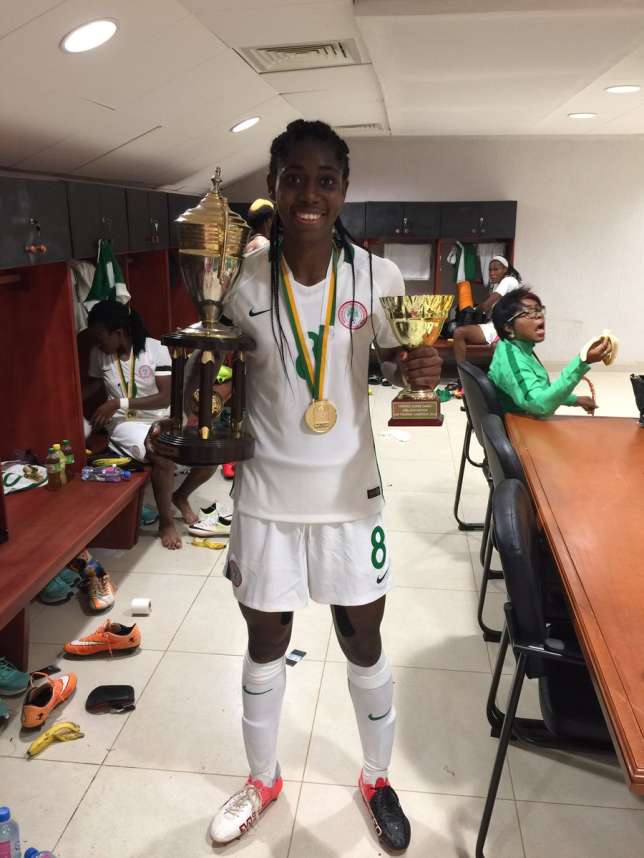 The 23-year-old had an impressive year in her debut season in China with Dalian Quanjian.

Super Falcons star Asisat Oshoala has been nominated for the 2017 African Women’s Player of the Year award.

The winner of the award will be announced at the Awards Gala which will hold on Thursday, January 4 in Accra, Ghana.

The 23-year-old had an impressive year in her debut season in China with Dalian Quanjian.

The Nigeria international who is the current holder of the award scored 12 goals for Dalian Quanjian in the Chinese Women’s Super League. She was voted the best striker in the league.

She also helped Dalian Quanjian to the Chinese Super Cup title, scoring a brace in a 5-3 win in the final over Shangai.

A win for the Nigerian star will make it the third time in four years she will be winning the award and one less than Super Falcons legend Perpetual Nkwocha who won it four times.

In a related development, the Falconets, Nigeria women’s national under-20 football has been nominated for Women’s National Team of the Year by CAF.

They have been nominated alongside Ghana U-20, Kenya, South Africa and Zimbabwe.

The winners will be decided by votes from the members of the CAF Technical & Development Committee, CAF Media Experts Panel and Independent Media and TV Consultants.