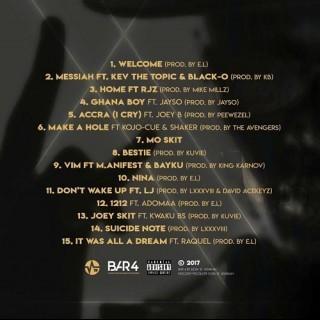 Former BBnZ rapper and producer E.L has release the official tracklist and features off his upcoming chronological BAR 4 tape. Just as we broke the news of EL‘s departure with BBnZ, the rapper later held a presser to detail the breakout and his new upcoming project.

EL is now self-signed to his new record label VO. The chronological album is the forth Hip-Hop tape released annually by the rapper. Artists appearing on the tape includes Jayso, Joey B, M,anifest, Adomaa, Kwaku bs, Raquel, Ko-Jo Cue and Shaker.