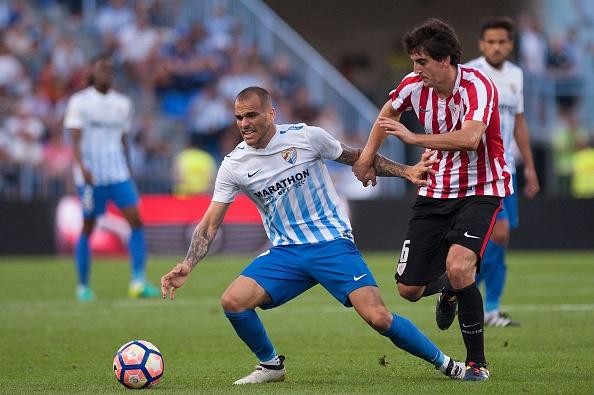 Highlights of the Euro U21 Championship clash between Spain and Macedonia

Marco Asensio scored a hat-trick as Spain U21s opened their European Championship campaign by coasting to a 5-0 victory against tournament outsiders Macedonia in Gdynia.

Macedonia found themselves 3-0 down by half-time, as 2011 and 2013 champions Spain took control with superbly taken goals from Asensio and Saul Niguez and a penalty from Gerard Deulofeu.

Asensio lashed in his second shortly after the break and claimed his hat-trick with a slick run and finish, as Spain warmed up for what now looks likely to be a battle for top spot in Group B against Portugal on Tuesday.

The performance continued a remarkable month for Asensio after the Real Madrid forward netted in the Champions League final against Juventus in Cardiff.

Macedonia showed good industry in the opening exchanges and looked determined not to allow their first appearance at a major finals to pass them by, with David Babunski and Boban Nikolov both trying their luck from distance early on.

Which Spaniards shone against Macedonia?

But Spain made their experience count on 10 minutes when full-back Jose Luis Gaya broke down the left and crossed for Asensio, whose cleanly-struck overhead kick bounced into the corner off the wrong-footed Igor Aleksovski in the Macedonia goal.

There was no let-up for the tournament debutants as within minutes Deulofeu broke through the middle and rounded Aleksovski, only to see his low shot cleared off the line before Asensio masterfully lobbed in Spain’s second from the rebound.

Duelofeu added a third from the penalty spot before the break after Egzon Bejtulai was adjudged to have handled Gaya’s cross, as Macedonia’s early promise began to wither against the onslaught from their ultra-clinical opponents.

Alonso had netted his side’s fourth with a neat dribble and a fierce finish by the time Babunski rattled goalkeeper Kepa Arrizabalaga’s crossbar with a bouncing long-range strike, before the Real Madrid man rounded off a spectacular hat-trick with a 25-yard strike following a mazy run from deep.

Man of the Match: Marco Asesnio

The forward seemed to be playing in a free role as he dominated every part of Spain’s attacking play. There was a calm confidence every time he played the ball and a self-assurance that suggests that this will be Asensio’s tournament.