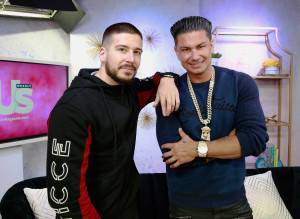 Gym, tan, weddings! Paul “DJ Pauly D” Delvecchio and Vinny Guadagnino are so excited for former Jersey Shore costar Sammi “Sweetheart” Giancola’s engagement — but will they be invited to the wedding?

“I don’t think she sent out those invites yet. We’ll see,” Vinny, 31, exclusively told Us Weekly on Tuesday, April 9, noting that he still talks to Sammi, 32, “when there’s life events and stuff” happening within their social circle.

Pauly, 38, added that he would definitely love to be present when Sammi — who split from Ronnie Ortiz-Magro in 2014 after a rocky three-year romance — marries Christian Biscardi. 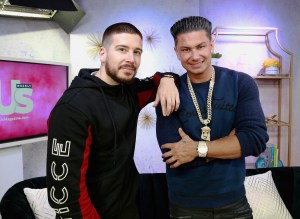 Vinny and Pauly D during their exclusive Us Weekly interview. Jeff Christensen

Although the jewelry designer starred in all six seasons of Jersey Shore’s original run from 2009 to 2012, she chose not to return for the reboot, Jersey Shore: Family Vacation. However, Vinny and Pauly haven’t given up hope that Sammi will change her mind and join in on the fun. 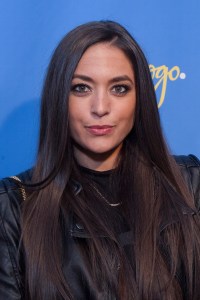 Back in March, Sammi revealed that her boyfriend of two years had popped the question. “I’m completely overwhelmed with happiness. Yesterday was the best day of my life! I get to marry my other half, best friend and soulmate,” the former MTV star captioned a photo of the proposal. “I look forward to spending the rest of my life with you @_biscardi I love you!! #Fiance #MrsBiscardi #Stillcryingtearsofhappiness.”

Although Sammi is still on good terms with most of her fellow Jersey Shore alums, a source previously revealed to Us that the driving force behind her decision not to participate in the reboot was fear of reigniting drama with Ronnie.

“Sammi isn’t regretting her decision to go back on the show at all. She knew if she went back on, it would be toxic. Just look at how everything is unfolding with Ronnie,” the insider told Us, referencing Ronnie’s tumultuous relationship with his on-again, off-again girlfriend, Jen Harley, with whom she shares daughter Ariana Sky, 12 months.

Watch the video above to hear more of Pauly D and Vinny’s thoughts about Sammi’s wedding!