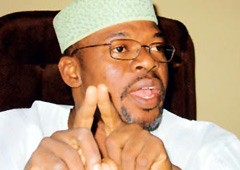 Ado-Ekiti—The Deputy National Chairman (South) of the All Progressives Congress, APC, Mr Segun Oni, has said there was no truth in the insinuation that he was engaging in anti-party activities by meeting with opposition elements, such as Ekiti State Governor, Mr Ayodele Fayose, the Senate Minority Leader, Godswill Akpabio and the Peoples Democratic Party, PDP, Caretaker Committee chairman, Senator Ahmed Makarfi. He said that those making the allegations are placing so much value on him, saying that if however Makarfi decides to visit him, he would welcome him.

Speaking with newsmen over the weekend at his campaign headquarters in Ado-Ekiti, Oni also pointed out that he would resign from his position one month before the governorship primary of his party coming up early next year, to enable him participate as an aspirant.

The former Governor, who was apparently reacting to the mounting agitation that he should quit his position if he wishes to contest for the 2018 governorship election in the state, said that the APC constitution is clear about when he should resign as Deputy National Chairman of the party.

Oni said the APC constitution says he must resign one month before the party’s primary, noting that he would not disobey his party’s law.

The former governor  expressed concern about the increasing rate of hate campaign against him.