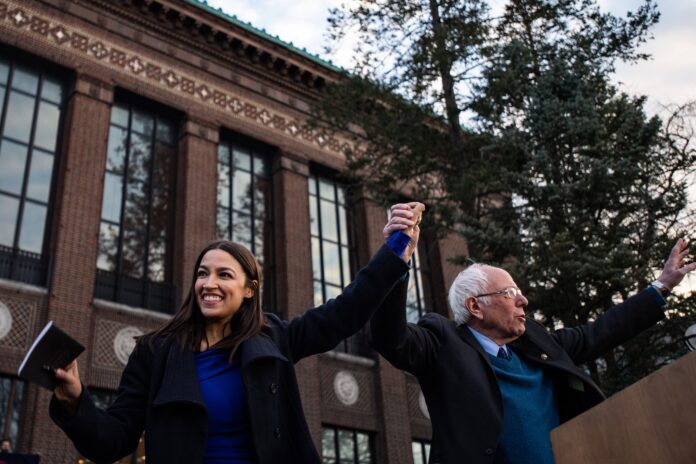 Rep. Alexandria Ocasio-Cortez (D-N.Y.) turned down repeated requests from Bernie Sanders’ presidential campaign to appear at events promoting the Vermont senator’s candidacy in recent weeks, according to three people familiar with the discussions.

After the Iowa caucuses, Sanders campaign manager Faiz Shakir asked Ocasio-Cortez to stump for Sanders in New Hampshire, according to the sources. The campaign prepared a model schedule to highlight the kind of popular support she would expect if she attended, one of the people familiar with the talks said.

Ocasio-Cortez resisted the entreaties until a few days before the primary on Feb. 12. She ultimately spoke the day before the election at a Sanders rally in Durham, New Hampshire, where the rock band The Strokes performed.

“It was like pulling teeth to get her to New Hampshire,” said a second person who knew about the discussions.

The absence of the popular progressive lawmaker on the trail in the weeks that followed was even more notable. In nearly a month that passed from Feb. 11  until March 8 ― two days before the Michigan primary ― Ocasio-Cortez declined multiple invitations from Sanders’ campaign to speak on his behalf in Nevada, South Carolina and the 14 states that voted on Super Tuesday, the three people told HuffPost.

During that period, Sanders rose and fell quickly, going from the uncontested front-runner after Nevada’s Feb. 22 contest to a heavy underdog after a blowout in South Carolina on Feb. 29 and Super Tuesday routs on March 3.

As an embattled Sanders prepared to mount an unsuccessful stand against former Vice President Joe Biden in Michigan on Tuesday, the campaign again turned to Ocasio-Cortez for help.

She agreed at the last minute to deliver a speech on Sunday at a get-out-the-vote rally on the University of Michigan campus in Ann Arbor. Sanders’ campaign issued a revised media advisory about the rally the night before, informing the press that Ocasio-Cortez would be present.

Neither the Sanders campaign nor the campaign office of Ocasio-Cortez denied that she had turned down requests for additional appearances.

Senator Sanders and our campaign will never forget that in one of the most difficult moments for us, Rep. Ocasio-Cortez gave us a boost with her strong endorsement.
Faiz Shakir, Sanders campaign manager

Instead, in a statement to HuffPost on Thursday, Shakir praised Ocasio-Cortez for her work on Sanders’ behalf, singling out her mid-October endorsement of Sanders after his heart attack. (Sanders’ allies credit the endorsement for helping revive his campaign, while backers of Sen. Elizabeth Warren (D-Mass.), who also courted Ocasio-Cortez’s blessing, lament the deflating effect it had on her fortunes.)

“Senator Sanders and our campaign will never forget that in one of the most difficult moments for us, Rep. Ocasio-Cortez gave us a boost with her strong endorsement,” Shakir said. “And she has remained a steady and consistent ally, supporter, surrogate and adviser to the senator ever since.”

In a follow-up exchange on Friday, the Sanders campaign affirmed that Ocasio-Cortez has been one of the most frequent campaign-trail surrogates for Sanders.

Ocasio-Cortez’s apparent decision to avoid stumping for Sanders stands out precisely because of her intense work on his behalf in the fall and early winter. Ocasio-Cortez spoke for Sanders at 15 major rallies, beginning with a late-October appearance in Queens that drew an estimated 26,000 people. She spoke at a number of smaller Sanders events as well.

Ocasio-Cortez’s help proved especially critical in January, when Sanders was stuck in Washington participating in the impeachment trial of President Donald Trump. Over the weekend of Jan. 24 to Jan. 26, Ocasio-Cortez headlined seven rallies for Sanders in Iowa and spoke at a canvass kickoff for his campaign.

Although the Sanders team would not say whether Ocasio-Cortez’s decision to avoid the trail reflected any dispute, Lauren Hitt, a spokeswoman for Ocasio-Cortez, denied that the congresswoman’s itinerary reflected tensions with the campaign.

“The plan was always that she would slow down her surrogate work in February, after Iowa, to focus on her re-elect and congressional duties,” Hitt said.

But the first source said a disagreement over Ocasio-Cortez’s remarks in Iowa seemed to cool her on helping with the campaign.

At a rally in Ames on Jan. 25, Ocasio-Cortez delivered a speech in which she failed to mention Sanders’ name ― an omission that Fox News noticed and highlighted. She also encouraged those in attendance to tip off people about the presence of immigration enforcement authorities in their communities to help undocumented immigrants evade detention.

As Vanity Fair first reported in February, Shakir apparently communicated to Ocasio-Cortez his dissatisfaction over her remarks about alerting the presence of immigration authorities. While Sanders has sought to scrap and restructure the Immigration and Customs Enforcement agency in its current form, his campaign has been trying to avoid the impression that it was encouraging noncooperation with federal law as it exists, according to one source. (The Sanders campaign denied on Friday that Shakir ever spoke to Ocasio-Cortez about her immigration remarks.)

After that, Ocasio-Cortez ― already annoyed with the campaign’s Jan. 23 decision to publicize the endorsement of controversial podcast host Joe Rogan ― grew less interested in helping Sanders’ campaign, according to the source. After her last event in Iowa on Jan. 26, she did not return to the trail for Sanders until 16 days later, at the New Hampshire rally featuring The Strokes.

It’s unclear whether Ocasio-Cortez’s low profile affected Sanders’ performance in the primaries. Sanders continues to struggle with older voters, among whom Ocasio-Cortez has less of a following. Her campaign trail appearance in Michigan did not prevent Sanders’ double-digit loss to Biden there.

Ocasio-Cortez’s presence was likely more missed in Texas’ 28th Congressional District, where progressive attorney Jessica Cisneros fell just 3.6 percentage points shy of unseating conservative Democratic Rep. Henry Cuellar. Ocasio-Cortez endorsed Cisneros in late October but made no trips to South Texas on her behalf ahead of the close race. (Sanders, who endorsed Cisneros in late January, did not make the journey, either.)

The relatively infrequent appearance of an important Sanders surrogate shows the contrasting levels of discipline between the progressive and moderate wings of the Democratic Party.