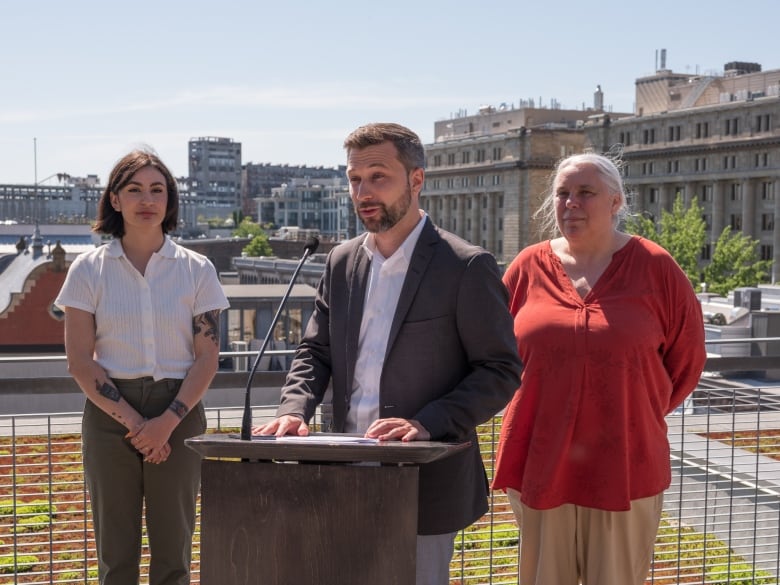 A young Indigenous activist and columnist is taking a step into provincial politics.

Maïtée Labrecque-Saganash announced she will seek the nomination for the Ungava riding in northern Quebec under Québec Solidaire’s banner.

If she wins the seat in the Oct. 3 provincial election, she will be the first Indigenous woman to sit in the National Assembly, say party officials.

“My aunts inspire me,” said Labrecque-Saganash, during a press conference Sunday with the co-spokespeople for Québec Solidaire, Gabriel Nadeau-Dubois and Manon Massé.

“My aunts survived a decade in residential schools. They, to this day, carry themselves with such dignity and power … that I tell myself I’m capable of everything,” she said.

My aunts inspire me … I tell myself, I’m capable of everything.– Maïtée Labrecque-Saganash

The Ungava riding is the largest riding in Quebec and includes the Cree and Inuit communities of Eeyou Istchee and Nunavik, as well as the non-Indigenous towns of Chibougamau, Chapais and Matagami. The seat is currently held by the ruling Coalition Avenir Quebec (CAQ) party.

“I will ferociously defend Cree and Inuit livelihoods and I will fight for the dignity of our communities in the National Assembly,” said Labrecque-Saganash, 27, adding she is also able to defend socially democratic values for the whole riding.

Ready to fight for a more just Quebec

“National crises like the lack of personnel in the healthcare network, the lack of affordable housing and the lack of teachers … all of these crises also exist in the North and they hit even harder in the North,” she said.

Québec Solidaire spokesperson Gabriel Nadeau Dubois called Labrecque-Saganash an inspiration and a long-time collaborator, adding her presence in the National Assembly will change it for the better.

“It takes a lot of courage in 2022 for a woman … for a young Indigenous woman to make the leap into politics,” said Nadeau-Dubois, adding many women in politics are now the target of hate on social media.

Following in her father’s footsteps

Labrecque-Saganash is also the daughter of Romeo Saganash, who represented the federal riding of Abitibi-Baie-James-Nunavik-Eeyou from 2011 to 2019 for the NDP.

“It’s not an easy adventure for anyone, let alone for a young Indigenous woman like her,” tweeted the elder Saganash, who retired from politics in 2019.

Not an easy adventure for anyone, let alone for a young Indigenous woman.– Romeo Saganash, father

“But I know her courage and her passion for social justice; I wish her much strength and love.”

Labrecque-Saganash lives in the riding, in the Cree community of Waswanipi, which has a population of about 2,000.

“I live in the North. I know how hard it is to access public services and how hard they are to navigate, especially for Indigenous peoples,” she said.

Northern voters are ready for a change

She said after several years of right-wing governments attacking the social safety net in the province, voters in the North are ready for the more progressive policies of Québec Solidaire.

And after working for years as a newspaper columnist and in the media, Labrecque-Saganash said she is very used to managing negative comments and feels grounded, strong and ready to fight for what she believes in.

“I will carry your stories,” she said.

“I know Eeyouch (Cree) and Nunavimmiut (Inuit) will have high expectations,” said Labrecque-Saganash.

“I know that we are tired of seeing our inherent rights to self-determination and basic human rights being reevaluated and up for debate in every single election.”