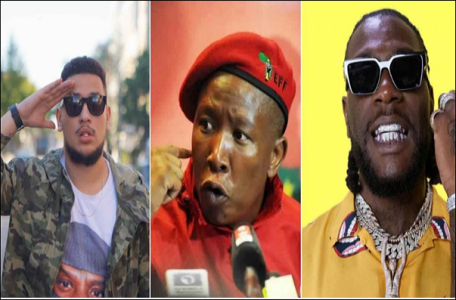 Punchng reports that South African opposition politician, Julius Malema, has assured Nigerian singer, Burna Boy, of his safety during his performance at the African Unite Concert scheduled to hold on November 24 in the country.

Via his verified Twitter handle, Malema, who is the founder of Economic Freedom Fighters and legislator said that he was looking forward to being entertained by Burna boy and that there was “no mascot” who can stop him from performing in South Africa.

“Looking forward to receiving and being entertained by my brother @burnaboy here at his home called South Africa. There’s no mascot that can stop him from performing, he’s one of our own and we will protect him. We must resolutely oppose regionalism led by political illiterates.”

It would be recalled that earlier this week, South African rapper, AKA Worldwide had resurrected an old spat with Burna Boy which started from the recent xenophobic attacks on Nigerians and other foreigners in South Africa. He demanded an apology from Burna Boy before he comes to perform in South Africa.

Xenophobia: You Must Apologise To My Country – AKA Tells Burna Boy As He Is Set To Perform In S. Africa

During the Twitter spat in September, Burna Boy had urged black foreigners living in SA to defend and protect themselves against the attackers. In a now-deleted tweet, he also told AKA to have enough security around him whenever they met.

“Ek se … @burnaboy all we want is an apology. We know ?? is not perfect. But we took you in as our own before you reached these levels. You say you are an AFRICAN GIANT, prove it (sic),” tweeted AKA on Thursday.

Meanwhile, some local artists have written to South Africa’s Minister of Arts and Culture, Nathi Mthethwa, to demand that the minister stop Burna Boy from performing in the country.

According to OkayAfrica, the artistes under the Tshwane Entertainment Collective told the minister saying,

Burna Boy has yet to react to the development.