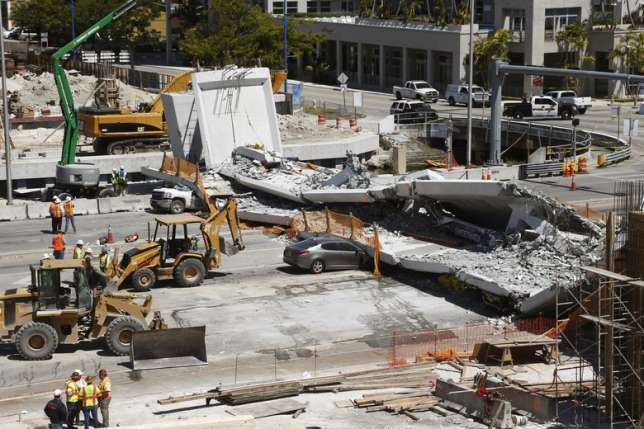 MIAMI — Hours before the collapse of a pedestrian bridge at Florida International University on Thursday, the engineering company for the bridge held a meeting to discuss a crack on the structure, according to a statement from the university released early Saturday.

The engineering company, Figg Bridge Engineers, delivered a technical presentation on the crack, and “concluded there were no safety concerns and the crack did not compromise the structural integrity of the bridge,” the statement said.

The construction manager on the project and representatives from the university and the state Transportation Department attended the two-hour meeting, which was led by Figg’s lead engineer on the project, W. Denney Pate.

Two days earlier, Pate left a voicemail message for the Transportation Department about “some cracking that’s been observed on the north end” of the bridge, according to a recording from the department released Friday. At both the meeting and in his message, Pate said the cracking did not present any safety issues.

The Transportation Department said the message was not heard until Friday morning. A spokesman for the agency, Dick Kane, said in an email that its representative at the meeting the day before, Alfredo Reyna, was a consultant whose role was chiefly to keep the project on schedule.

“While Reyna is a professional engineer, he does not have control over the project and relies on the expertise of the licensed engineer of record,” Kane said.

At no point during their communications, the department said, “did Figg or any member of the FIU design-build team ever communicate a life-safety issue.”

Whether the cracking contributed to the collapse, which killed at least six people, remains a key question in the investigation.

Construction crews were working on a diagonal beam at the north end of the structure at or about the time of the collapse, according to information the National Transportation Safety Board provided to local members of Congress. Workers were tightening cables that ran inside the beam.

Such adjustments, which engineers call “post-tensioning,” are common in concrete designs to fine-tune the structure once it is in place. In this case, however, it was not clear whether the cable-tightening was routine or an urgent undertaking in response to the discovery of the crack in the bridge.

Around the same time the meeting was starting, about 9 a.m., Jorge Mesa, a 31-year-old university employee, said he was in his car near the bridge when he heard “a cracking-whip kind of sound.” He looked to his right and saw one of the construction workers on the street.

“When he gave me that face, I got the chills all the way down my body,” he said.

The bridge came down that afternoon.

Witnesses said the collapse appeared to start near the north end. But no one, including the NTSB, has so far placed any blame for the collapse on the cables or cable-tightening work.

By Saturday evening, recovery crews had extracted three crushed vehicles from under the rubble. Workers covered the vehicles in black sheeting and towed them to the medical examiner to identify the remains of any victims inside.

At least three vehicles remain trapped under the bridge. The number of known victims had not changed, Maurice Kemp, deputy mayor of Miami-Dade County, said.

One of the six victims, Navarro Brown, was part of the crew working on the bridge and died at a hospital. The Police Department identified one victim in the first vehicle, Roland Fraga Hernandez, and two in the second vehicle, Oswald Gonzalez, 57, and Alberto Arias, 53.

Police said the first vehicle was a Jeep Cherokee. It was nearly flattened but still distinguishable by its front grill, according to videos by The Miami Herald and local television news outlets.

The second vehicle, crumpled almost beyond recognition, was a Chevrolet pickup truck. Cranes lifted the vehicles onto flatbed trucks, which were escorted to the medical examiner by a police motorcade.

The crews placed a white tent with black sheets along three sides to shield the vehicles from view while they were being pulled from under the concrete, according to the Herald video.

After the first two extractions Saturday morning, Joseph Smitha was walking around in a daze on the Florida International University campus. His niece, Alexa Duran, remained under the debris of the bridge a block away.

Smitha, a 55-year-old auto parts manager, had spent the night in his truck after making the four-hour drive from Palm Harbor, Florida, fitfully mourning Duran, a freshman at the university.

Smitha and members of other victims’ families are being given temporary quarters in a university building equipped with cots and snacks, awaiting news that none of them want to hear.

“I still think the kid is going to surface,” he said, referring to his niece. “Maybe she’s at some friend’s house. ‘Hey, you had us scared,’ I’ll say to her. I’d give everything I have to bring her back. It just kills me that this is something that could have been prevented.”

At about 5:30 p.m., the gray Toyota 4Runner that Duran had been driving was pulled slowly from the rubble. A dark blue tarp covered its flattened shape. Her father, Orlando Duran, had arrived from London only minutes earlier.

“He’s upset about how long it’s taken for them to get his daughter out,” Smitha, his brother-in-law, said.

Alexa Duran and a friend, FIU student Richard Humble, had been waiting at a red light when the bridge came crashing down on the Toyota and other vehicles.

“Her passenger walked away, God bless him,” Smitha said. “But he’s going to have to live with that for the rest of his life.”