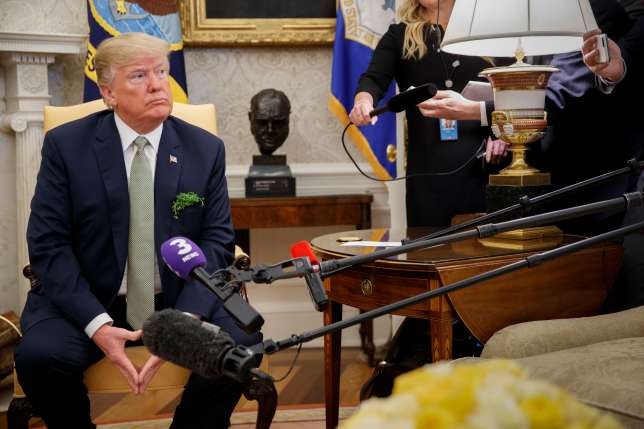 WASHINGTON — A lawyer for President Donald Trump called on the Justice Department on Saturday to end the special counsel investigation into ties between Russia and the Trump campaign, shifting abruptly to a more adversarial stance as the inquiry appeared to be intensifying.

The comments by the lawyer, John Dowd, were prompted by the firing late Friday of the former deputy FBI director, Andrew McCabe.

Dowd exhorted Rod Rosenstein, the deputy attorney general who oversees the special counsel, to end the inquiry and accused the former FBI director, James Comey, of concocting a baseless investigation.

“I pray that Acting Attorney General Rosenstein will follow the brilliant and courageous example of the FBI Office of Professional Responsibility and Attorney General Jeff Sessions and bring an end to alleged Russia collusion investigation manufactured by McCabe’s boss James Comey based upon a fraudulent and corrupt dossier,” Dowd told The Daily Beast.

His remarks capped another round of revelations in recent days that reinvigorated or displayed Trump’s frustrations with the investigation that has cast a shadow over his presidency. He was said to be angered over a New York Times report that records from the Trump Organization were subpoenaed, and he celebrated the firing of McCabe, who was among the first FBI officials to scrutinize possible links between Russia and the Trump team, calling his dismissal a “great day for Democracy” on Twitter.

On Saturday evening, Trump for the first time posted a tweet that specifically mentioned the special counsel, Robert Mueller. The president again denounced the inquiry he is conducting as a “witch hunt.”

“The Mueller probe should never have been started in that there was no collusion and there was no crime,” he wrote. “It was based on fraudulent activities and a Fake Dossier paid for by Crooked Hillary and the DNC, and improperly used in FISA COURT for surveillance of my campaign.”

Dowd, by contrast, did not name the special counsel in his statement, but the implication that he believed Mueller should be fired was unmistakable. Such a move could set off alarms among Republicans in Congress, who have largely stood by as the president repeatedly assailed the Justice Department and the FBI.

Dowd said at first that he was speaking on behalf of the president but later backed off that assertion. He did not elaborate on why he was calling for the end of the investigation, saying only: “Just end it on the merits in light of recent revelations.”

People close to the president were skeptical Dowd was acting on his own. Trump has a history of using advisers to publicly test a message, giving him some distance from it. And Dowd’s comments came at a time when members of Trump’s legal team are jockeying to stay in his favor.

Hours later, the president echoed Dowd’s accusations of corruption in the theoretical “deep state” that Trump has long cast as a boogeyman working to undermine him.

“There was tremendous leaking, lying and corruption at the highest levels of the FBI, Justice & State,” he wrote on Twitter.

The president’s tweets, posted on a Saturday in which he remained inside the White House with no public schedule, came as Mueller is said to have sent questions to Trump’s legal team as part of negotiations over an interview with the president. Mueller is seeking the interview, according to two people close to the White House, in order to ask follow-up questions but put forward the list as a start.

Dowd’s remarks about Mueller’s investigation represented an extraordinary shift in public strategy for the Trump legal team. Since taking over the case last summer, Trump’s attorneys have urged a strategy of restraint, in which the president avoids discussing Mueller or criticizing him, and the lawyers had done nothing publicly until now that could agitate the special counsel’s team.

The comments by both Trump and Dowd lent credence to McCabe’s assertion that the president sees his firing as directly tied into Mueller’s case. McCabe, who is a potential witness in the investigation, declared his dismissal was an attempt to undermine it.

Sessions fired McCabe for failing to be forthcoming with the department’s internal watchdog about a conversation he authorized between FBI officials and a journalist.

Like Comey, McCabe also kept contemporaneous memos about his interactions with the president and his conversations with Comey, a person close to McCabe said Saturday.

The memos could support the account of Comey, who described in his memos and congressional testimony repeated requests from the president to clear his name. Comey said Trump also asked him to end an investigation into his former national security adviser, Michael Flynn. The special counsel is investigating both matters.

McCabe’s memos were left at the FBI, which means Mueller’s investigators have access to them as they work to corroborate Comey’s account.

McCabe’s lawyers had no comment Saturday, and Rosenstein has repeatedly defended the special counsel, including in an interview this month with USA Today, in which he said he had seen no need to fire Mueller.

Comey, who has a book scheduled to be published next month, weighed in himself.

“Mr. President, the American people will hear my story very soon,” he tweeted. “And they can judge for themselves who is honorable and who is not.”

The president’s supporters have tried to undercut the investigation as part of a broader attempt to clear him of wrongdoing. This month, Republicans on the House Intelligence Committee — which is led by a close ally of the president, Rep. Devin Nunes of California — concluded their own investigation into Russia’s election meddling, saying they had determined the president did nothing wrong. Democrats on the panel accused Republicans of putting partisan politics ahead of fact-finding.

Trump, who has repeatedly criticized McCabe’s wife for accepting hundreds of thousands of dollars in donations from a political committee tied to Terry McAuliffe, a Hillary Clinton ally, for a Virginia state Senate race — praised McCabe’s ouster again Saturday.

“The Fake News is beside themselves that McCabe was caught, called out and fired. How many hundreds of thousands of dollars was given to wife’s campaign by Crooked H friend, Terry M, who was also under investigation?” he tweeted. “How many lies? How many leaks? Comey knew it all, and much more!”

Trump has increasingly expressed frustration as the special counsel investigation has shown more signs of accelerating rather than ending. His legal team has worked to keep him from firing Mueller in the past. To keep the president at bay, the attorneys — led by the White House lawyer Ty Cobb — told him that Mueller’s investigation would be over by last December and that they would ask Mueller to put out a statement saying the president was not a target of the investigation.

But instead, Trump was livid anew this past week over The Times report that Mueller had subpoenaed his corporate records, including those related to Russia, according to one person close to the White House.

The president’s lawyers appear to be feeling increasingly uneasy about where they stand. This month, Trump met with a veteran Washington lawyer, Emmet T. Flood, to discuss coming on board to take over the president’s dealings with Mueller’s office and possibly replacing Donald McGahn as White House counsel. The president’s personal lawyers, Dowd and Jay Sekulow, did not know about the meeting, prompting concerns that they could be pushed aside and potentially making them less resistant to Trump’s whims about handling the inquiry..

Last June, Trump backed down from his demand that Mueller be fired after McGahn threatened to quit. A month later, Trump said in an interview with The Times that the special counsel would be crossing a red line if he looked into his family’s finances beyond any relationship with Russia. After the Trump Organization subpoena was revealed Thursday, Trump’s lawyers privately tried to play it down, in part to keep the president and his family calm.

Dowd has been at the center of a string of embarrassing episodes in recent months. In December, he said he had written a tweet posted by the president that implied Trump knew Flynn had lied to the FBI when Trump fired him.

Months earlier, Dowd was overheard by a Times reporter discussing details of a dispute inside the president’s legal team over lunch at a Washington steakhouse.