Working With Falz Has Been Magical–SessBeats 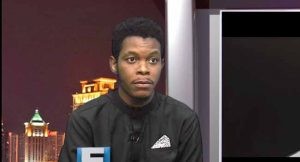 Barrister turned music producer salami Oluwasesan Abbas popularly known as ‘SessBeats’ or ‘Sess The Problem Kid’ struck a cord with award winning rapper Falz who is also a trained lawyer and from then on his life took a whole new turn as the success of their collaboration on the “stories that touch” album rubbed off on his career.

Sess who got his major break with the music when he got to work with Falz as a producer was an unknown Ilorin based wanna be singer who took up music production for lack of funds to pay producers to make his own songs.

Speaking in an exclusive interview with Entertainment news on channels television he explained how his chemistry with falz has waxed stronger over years.

“From the first day I got into the studio with him (Falz), the chemistry was amazing, he being a lawyer also made us set and we started working from one song to the next song and he was like let us work on an album. From then it was history and it has been magical. ”

Sess who is responsible for Falz and Simi‘s joint EP Chemistry and a couple of songs released by Falz and several other acts explained his difficulties exiting law and facing music squirrely.

“I was serving in a court during my NYSC, I can remember I was in the front of the judge and I looked around like what am I doing here, I don’t regret studying law or been a lawyer but at that point I just decided I really wanted to  do this, I want to actually pursue my dreams ,that was the point for me and that was 2012.He told entertainment news

“At that point, everybody around me was proud that I was a lawyer, my parents were very happy, so it was more like how am I going to disappoint them and tell them I don’t want to do it anymore,

“so it was a real psychological battle for me to make that decision and face them and say well you paid for my law school and my fees but I don’t really want to do it again.i don’t regret it(studying law) but I wasn’t happy, it wasn’t my thing at that point it.”

He stated how music has being a part of him right from his childhood and how it has made him now. He said

“I have always liked music, right from when I was a kid I was in the church and school choir, I use to play the drum so music has always been a part of my life, I have always made music but education is also a very important aspect.”

He has continued to enjoy growing popularity in the industry but he has plans to use that as a tool for change.

Saas is working to combine his knowledge of law and music to address a long-standing issue of intellectual property theft in the Nigerian music industry.