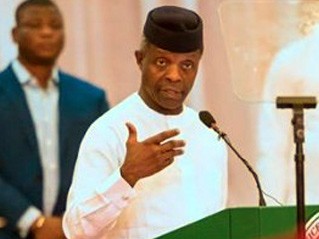 ABUJA—CONVENER and National Leader of the Pan Niger Delta Forum, PANDEF, Chief Edwin Clark, has explained that one of the major reasons for the recent tension in the Niger Delta region, was that every week, the people hear of allocations of billions of naira, evidently from improved government earnings from oil, by the Federal Executive Council, FEC, to projects in other parts of the country with nothing given back to the region.

He underscored the point in his address presented at last Thursday meeting of PANDEF with acting President, Prof Yemi Osinbajo, at Aso Villa, Abuja.

This came as a renowned academic, Prof Benjamin Okaba, said, weekend, that the reason for the increasing spate of violence and agitations in the region was that the root cause of the crisis in the region had not been tackled. He said: “The structural imperfections in the current political arrangement in Nigeria are the root cause of the crises in the Niger Delta. The region will not experience peace until there is restructuring.”

Clark, who reeled out the peace efforts of the regional body, said: “Every week, we hear of decisions by the Federal Executive Council where billions of naira, (obviously, the result of the new increase in government earnings) being allocated for projects in other parts of the country, with virtually nothing coming to our zone.

“This kind of situation is not only unjust and inequitable, but has also started to spark a backlash of frustration and tension in the region. It is painting us the leaders (who took up the gauntlet and the risk of going into the creeks to calm the various aggrieved groups to give peace a chance) in very bad light.

“We are truly pleased that the country is able, especially at this time of recession, to fully harness the benefits of peace in the area, to positively impact on our national economy, both for the purpose of recovery, and the realization of the various programmes of the government.

“We are, however, disappointed that this painstaking effort, which we undertook and has brought great relief to the country, has not been appropriately reciprocated by government, in terms of any meaningful activity that is ongoing in the Niger Delta region,” he said.

Meanwhile, Prof Okaba, who spoke at a conference by the National Youth Council of Nigeria, South-South, in Warri, Delta state, said: “The obvious fact that, the spate of violence and agitations against the current state of the Nigeria project within and outside the Niger Delta region is increasing at an alarming and dangerous proportion, indicates that the long list of peace dialogue/reports have yielded little success.

“The obstacles, challenges and impediments to successful peace dialogue and sustainable peace and development in the region could be identified as follows; we shy away from the root causes of the crises/conflict but quickly treat their symptoms; the structural imperfections in the current political arrangement in Nigeria are the root cause of the crises in the Niger Delta. The region will not experience peace until there is restructuring,” he said.

He stated that  “The lack of/or absence of the needed political will to implement the recommendations of previous report/white papers diminishes the people’s confidence in the state’s capacity and sincerity to handle fresh case.”

He submitted: “The two years rapid sustainable development plan/initiative recently announce by the Acting President, Prof. Yemi Osibanjo, like previous plan state intervention, will only make a difference if translated from rhetoric to reality.”