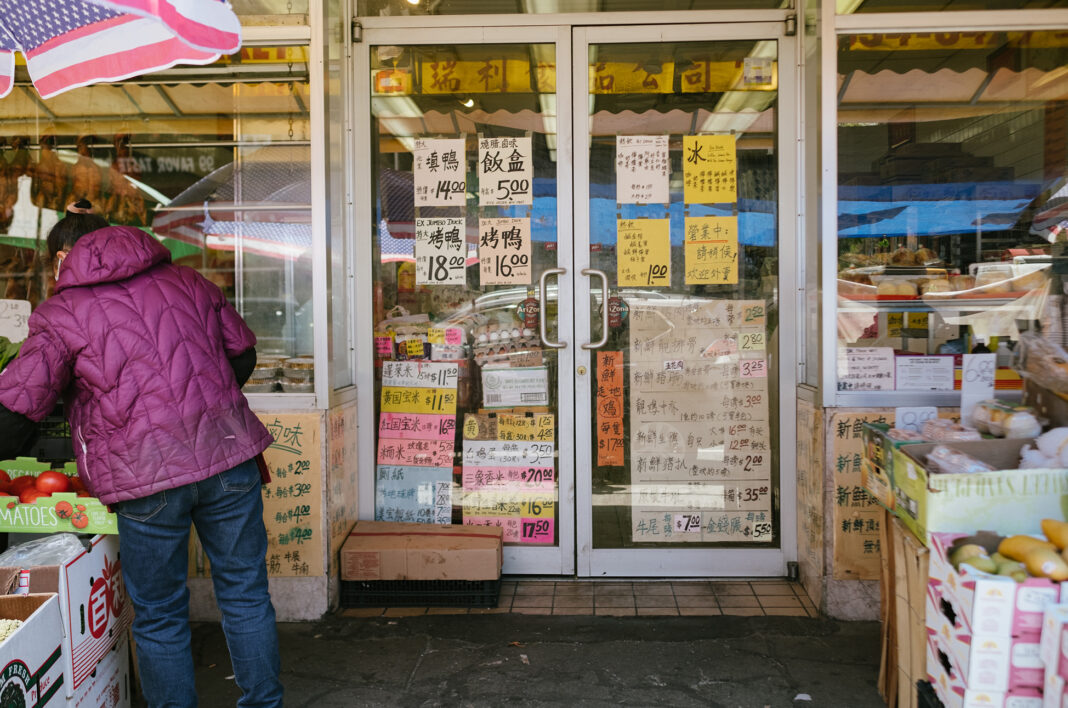 Asian Americans Out Loud is a project highlighting Asian Americans leading the way forward in art and activism. You can read more by visiting our Jing Fong has been an institution in Manhattan’s Chinatown. On weekend mornings, it’s typically packed with customers, a symphony of lively chatter, the clatter of dishes, and the squeaky wheels of dim sum carts rolling from table to table. Families have rented the room for birthdays, graduations, holidays, and wedding receptions. On March 7, it served dim sum for one final time, joining a long list of Chinatown businesses to shutter during the COVID-19 pandemic.

As of March, at least 17 restaurants and 139 ground-floor stores in Chinatown have permanently closed since the pandemic began, according to the Chinatown Partnership Local Development Corporation. Jing Fong’s other location on the Upper West Side will remain open, and the Chinatown storefront continues to serve takeout and delivery. At the same time, the owners hope to find a new location. Meanwhile, Jing Fong’s workers, the only unionized restaurant workers in Chinatown, have proposed a worker-owned alternative that could operate in the same space. Whatever happens, it’s still an unspeakably difficult loss and a bleak sign of Chinatown’s precarious future.

In a cruel coincidence, Jing Fong was where I had my last in-person restaurant meal before the pandemic — almost exactly a year earlier, on March 8, 2020, the Sunday before everything shut down in New York. Already, businesses in Chinatown had been struggling, part of a trend in Asian American communities and cultural hubs across the country. Since that January, when COVID-19 began spreading in Asia, Asian-owned businesses started to experience a precipitous drop in revenue and patronage, as customers’ racist and xenophobic fears kept them away. 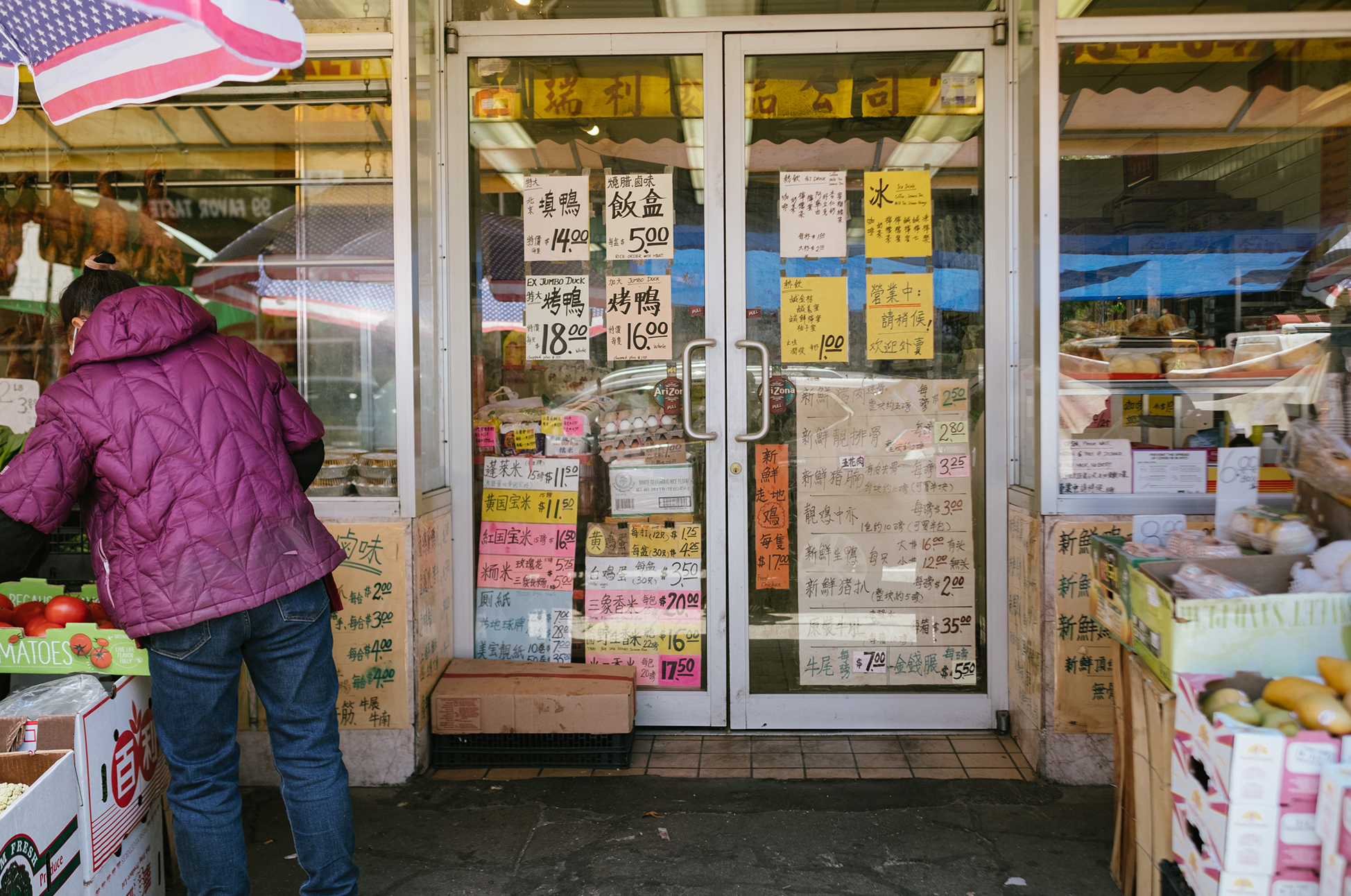 Ben Meat Market in Manhattan’s Chinatown is a recipient of grant funding from Welcome to Chinatown.

Vic Lee, the co-founder of Welcome to Chinatown, remembers that time too when everything began to feel increasingly unstable.

“I remember last Lunar New Year. Lunar New Year is such a festive, busy time, if not the busiest for Chinatown. And it just felt off,” she said. “There were a lot fewer people. The celebrations didn’t feel as big and hearty.”

Throughout early 2020, she noticed bars and restaurants that would normally be packed on a typical evening looked a lot emptier. By March, when New York became one of the epicenters of the pandemic, she knew things would get even direr, so she and her friend Jen Tam co-founded Welcome to Chinatown, a nonprofit, volunteer-led effort to help the neighborhood’s small businesses.

The group’s initial focus was to provide temporary support, raising money to keep businesses afloat, and coordinating with restaurants to distribute meals to essential workers. In the year since, Welcome to Chinatown has expanded into more longer-term projects, mounting more ambitious fundraising efforts through events and merchandise, launching a grant program for small businesses, and establishing partnerships with other community organizations. It also uses storytelling and art to spotlight business owners on social media. And it helps Chinatown’s residents — many of whom are older and not native English speakers — with various needs, from making sure they got counted in last year’s census to assisting them with getting scheduled for COVID-19 vaccine appointments.

A native New Yorker, Lee grew up in Brooklyn but spent most weekends of her childhood visiting her grandmother in Manhattan’s Chinatown, which became a formative part of her life. 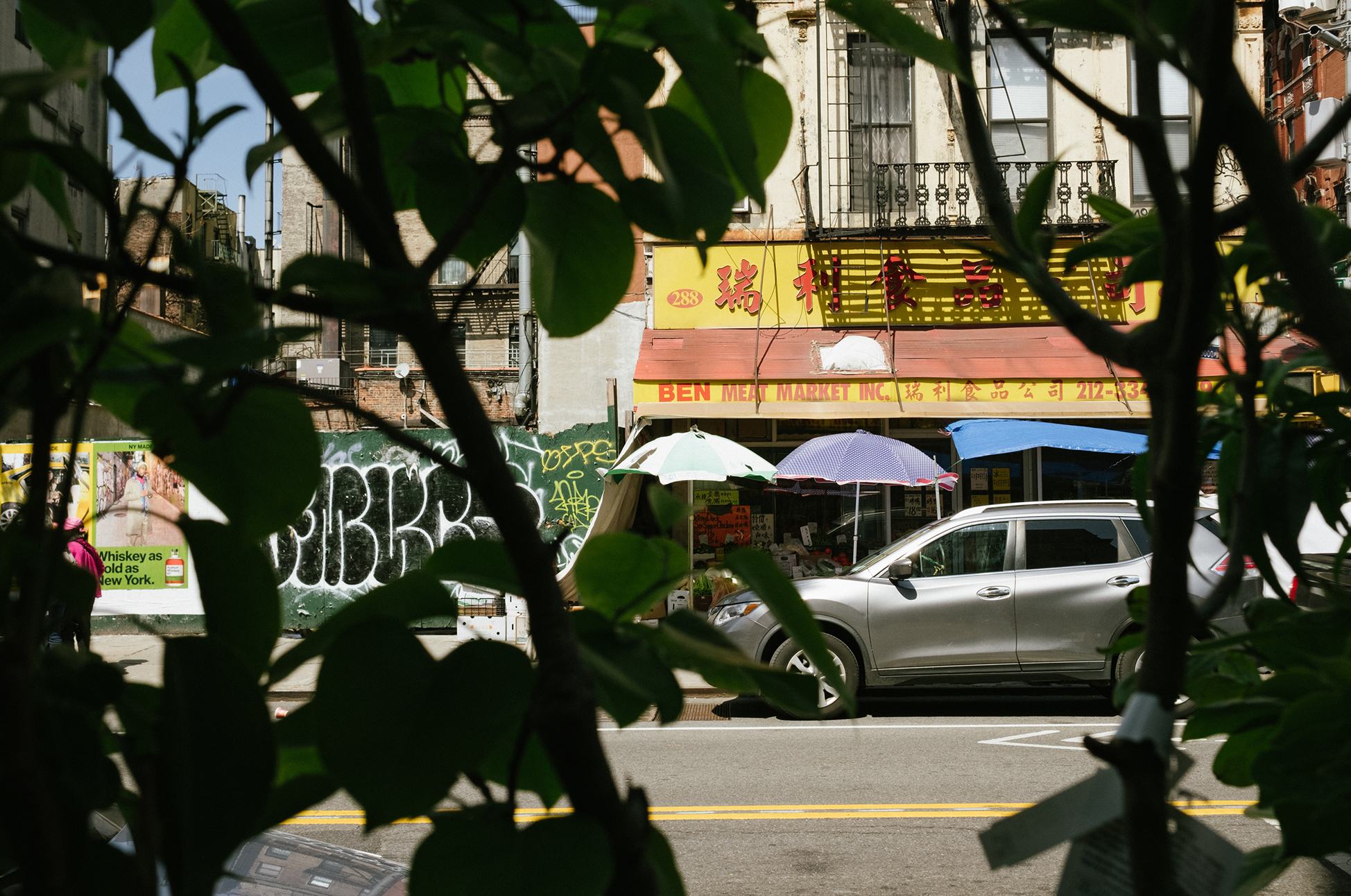 “When we think of communities and ethnic enclaves like Chinatown, they represent the identity, and they’re what makes the community so vibrant and rich,” said Vic Lee, co-founder of Welcome to Chinatown.

: We would drive, we would do our grocery shopping, my grandma would take me to the park,” Lee said. “We would rent videos from Hong Kong and take them home to watch.”

As an adult, Lee now lives in Chinatown herself. While times have changed, small businesses have always formed “the heart of the neighborhood,” she said.

“When we think of communities and ethnic enclaves like Chinatown, they represent the identity, and they’re what makes the community so vibrant and rich,” Lee said. “They’re also a lifeline, too, for many of the residents that depend on business owners who can speak their language. Or, in particular, for Chinatown, which has a large population living in poverty and a large senior population, they need culturally relevant, affordable items.”

Lee noted that when small businesses close, it often leads to deeper inequities: the displacement of longtime residents and the acceleration of gentrification, with storefronts turning into big-box stores and overpriced condos.

There are also myriad challenges that are unique to Chinatown’s businesses, Lee said. They’re highly dependent on foot traffic, which all but disappeared when the pandemic shut down the city. Most Chinatown businesses tend to operate with “high volume and low-profit margins,” she said. Many are cash-only and don’t have the resources to manage an online ordering system or advertise on social media. And many are family-owned and multigenerational businesses, so they often have to close if they don’t have younger family members who can take the reins and modernize the business. 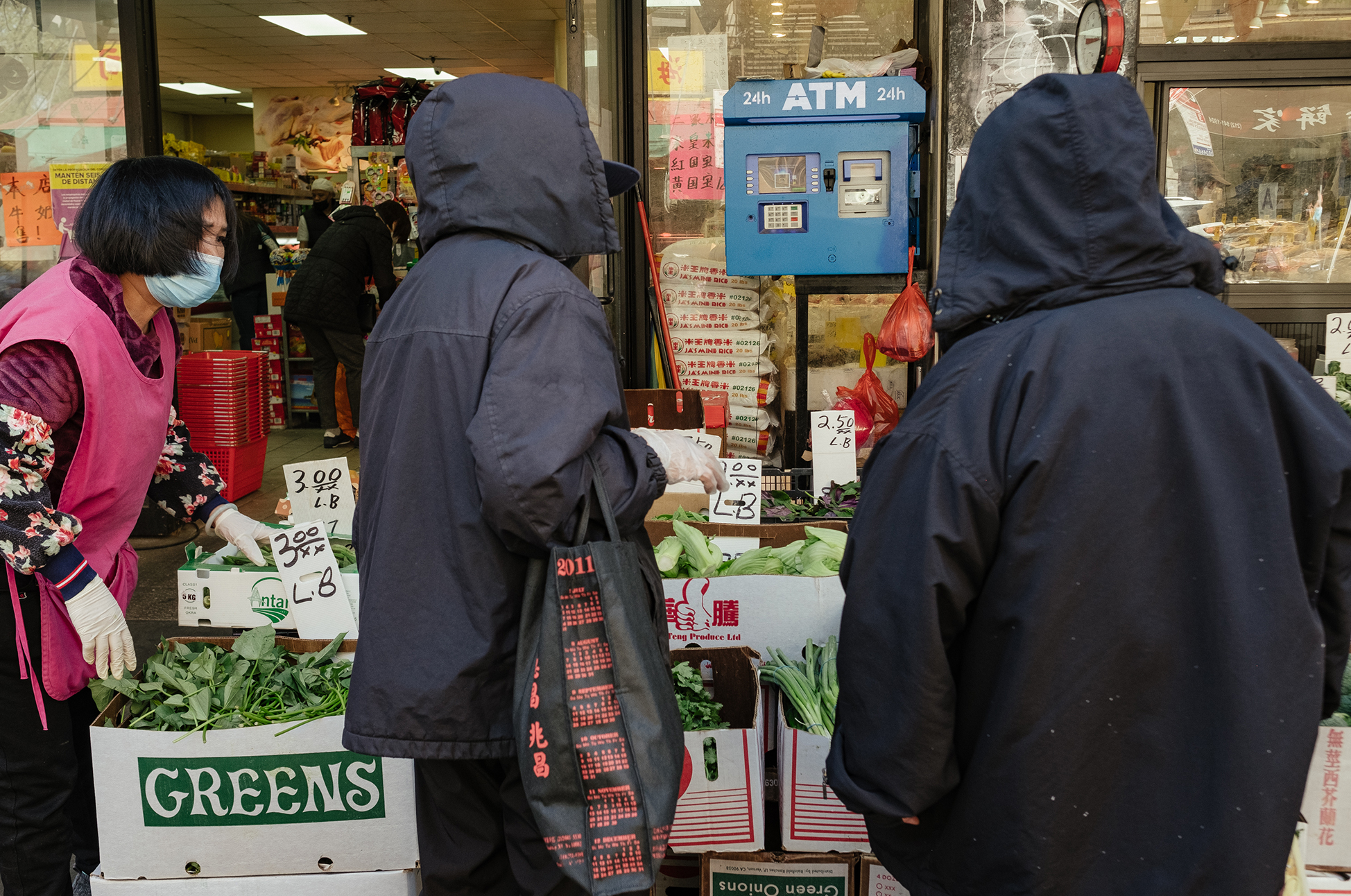 People buy vegetables outside a grocery store on Grand Street in Manhattan’s Chinatown.

On top of that, there are systemic and institutional barriers, like the inequitable ways governments choose to distribute funding. Many Chinatown business owners speak limited English, so navigating processes like applying for loans and grants can be daunting. Lee said that govLee said unions need to provide better language access and outreach on a basic level.

“In a very diverse city like on a basic level now York City, at this point, to not have things that are consistently translated into different languages or having the city invest in translators from the get-go, that means that you’re not providing access,” she said. “Then, there isn’t equity, and then you’re not having systemic change because those that are at the bottom are going to keep staying at the bottom, because they don’t know what’s available to them.”

For so many marginalized communities, the pandemic has exacerbated existing inequities, and it has fallen largely to individuals and grassroots organizations like Welcome to Chinatown to attempt to fill the void left by insufficient local, state and federal intervention.

Lee said that makes her angry, but at the same time, she is heartened that so many people have stepped up, like Welcome to Chinatown’s volunteer base. Many of the volunteers, like heLike her, manyre second-generatiericans who have felt more empowered and emboldened to speak out, take action and pay it forward. 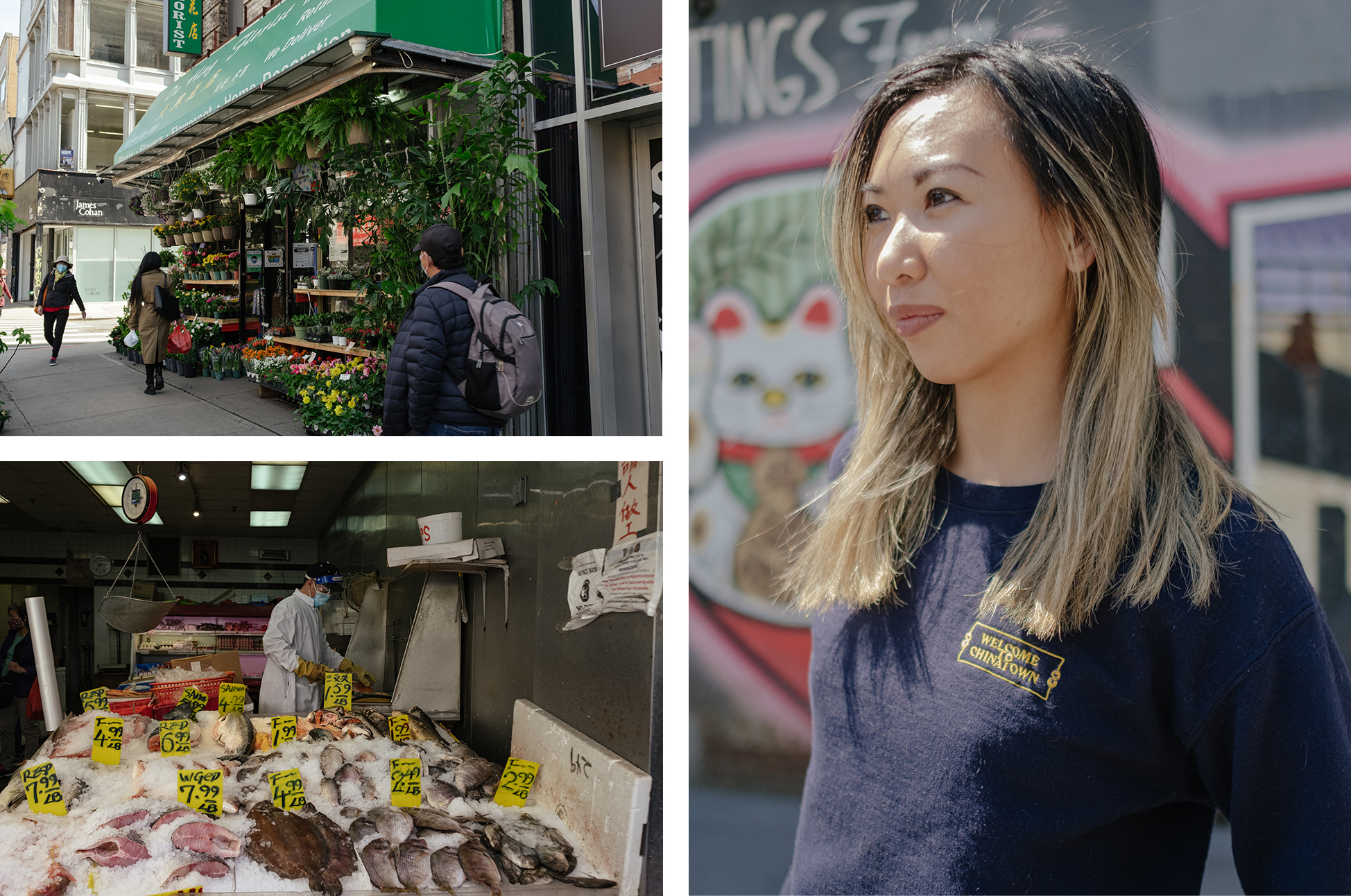 Many of the volunteers are younger Asian Americans helping older Asian Americans, promoting intergenerational solidarity. The volunteers come from a variety of professional backgrounds — marketing, communications, finance and nonprofit administration, for instance — and have applied those skills to developing Welcome to Chinatown’s various initiatives. For example, Lee’s day job is at Estée Lauder, where she is the director of global travel and meetings, which involves a lot of experience in operations and logistics, and Tam is the director of communications at Foursquare.

In a typical year, Lee’s job involved a lot of travel. But one unexpected silver lining of the pandemic is that she has gained an appreciation of Chinatown as her home without travel.

“Seeing my neighborhood at ri without travelsk of loss,” she said, has really galvanized her. “Like, oh my gosh, I am not going to have this place where my grandmother used to take me to the park, and I’m not going to be able to do this with my children in the future.”

For Lee, the pandemic has been a transformative experience. Separate from her work as co-founder of Welcome to Chinatown, her activism in the last year has inspired her to run for district leader in New York City’s primaries this June.

“This whole year has been just such a rediscovery of my identity, and I feel that way for many of our volunteers,” she said. “I’m hopeful for second-generation Asian Americans like myself, that we will become more involved in our community, and hopefully more involved in local politics, because we need that representation in order to ensure that stuff like this changes.”