Asian American Activists Want More Than To Not Be Attacked 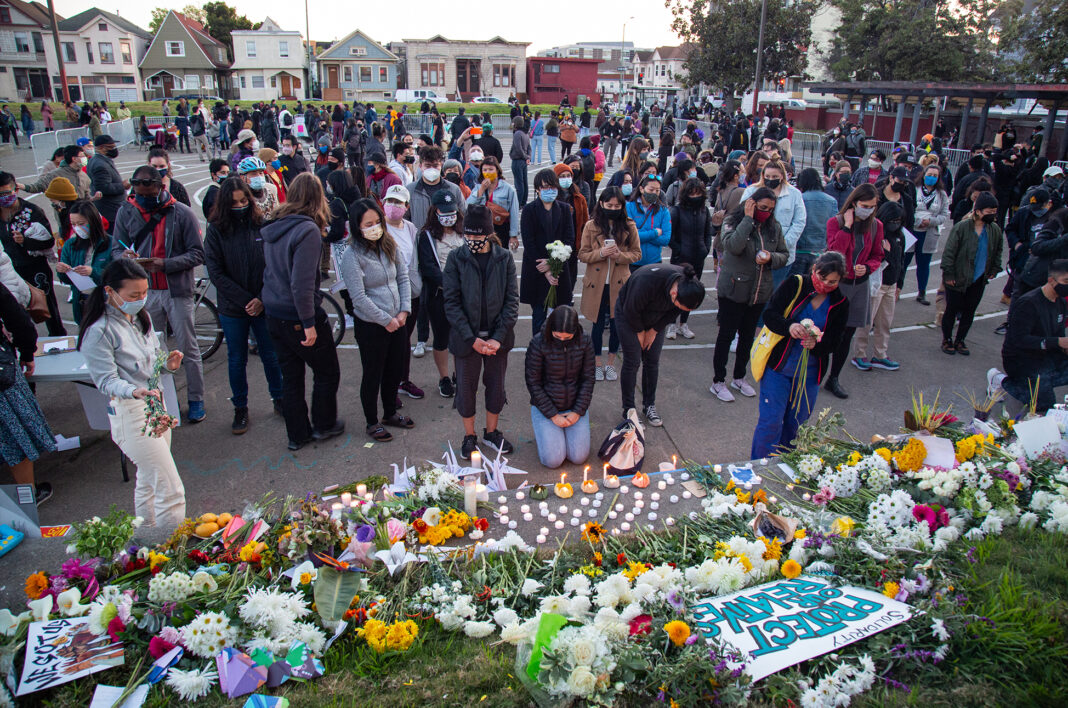 Asian Americans Out Loud is a project highlighting Asian Americans leading the way forward in art and activism. You can read more by visiting our Asian Pacific Environmental Network, “about people feeling connected to one another, having access to resources they need, the stability that comes from stable housing, food, and health care access.”

For Huang and other activists, the violence this past year against Asians — including high-profile attacks on older people in the Bay Area — did not happen in a vacuum: It’s part of a long history of anti-Asian racism this country. The solutions are complex and require long-term planning, including organizing with other people of color and demanding investments in their communities’ livelihoods and health. 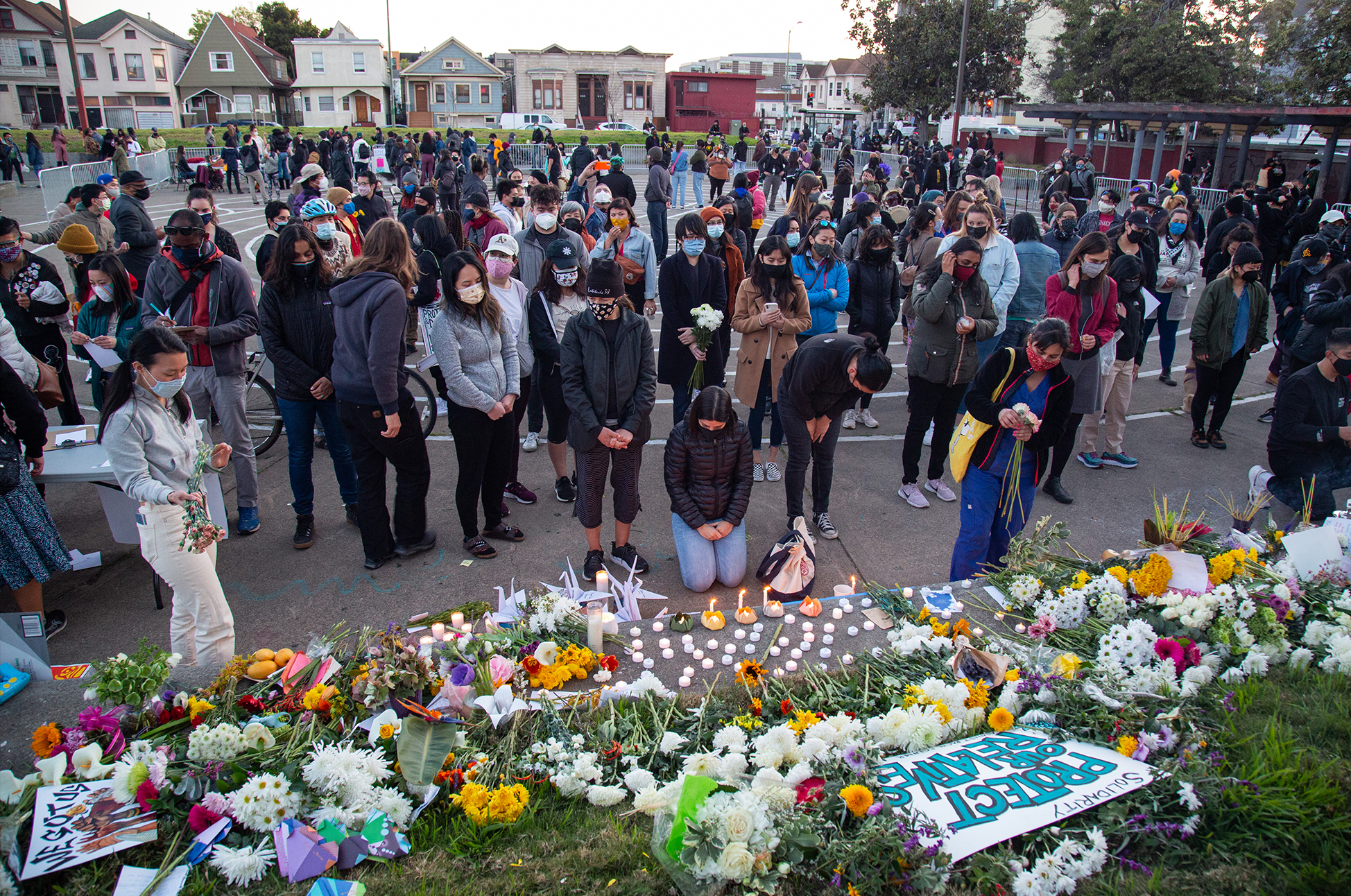 In March, people honor the victims of the Atlanta mass shootings at a vigil in Oakland, California.

In Oakland and nearby Richmond — which are disproportionately Black, Latinx, Asian and poor — APEN has been organizing for nearly three decades with Laotian refugees and Chinese immigrants around issues endangering all residents of color. The organization has been fighting against toxic pollution in Richmond, organizing to keep Chevron from expanding its oil refinery, and successfully pushing to pass a local ordinance to phase out the local export of fossil fuels.

While battling the housing crisis in Oakland, the group has fought for increased renter protections, negotiated with major developers to build more affordable housing, and organized a mutual aid fund for families struggling during the pandemic.

PAYPAL, an Asian and Pacific Islander youth group, has also been in Oakland since the 1990s, organizing students to fight gentrification and give voice to Asian American and Pacific Islander students in the local school district. In recent years, the group has joined others in protesting the Oakland A’s baseball team’s attempt to build a stadium that the community feared would push out lower-income residents, and passed a resolution in Oakland schools to disaggregate students’ racial and ethnic data to reflect how Southeast Asian students are disproportionately impacted by poverty.

When it came to responding to the recent spike in anti-Asian violence, the organizations set up rallies alongside groups led by Black, Indigenous, and other people of color. They called for solutions that would keep everyone safe. Notably, the groups pushed to not give more resources and funding to law enforcement due to the harm overpricing can cause to Black and Latinx neighbors and Southeast Asians.

“We all deserve safety. We’re not safe if only one part of our community is safe,” Huang said, adding that the multiracial groups have a common cause: “combating white supremacy.” 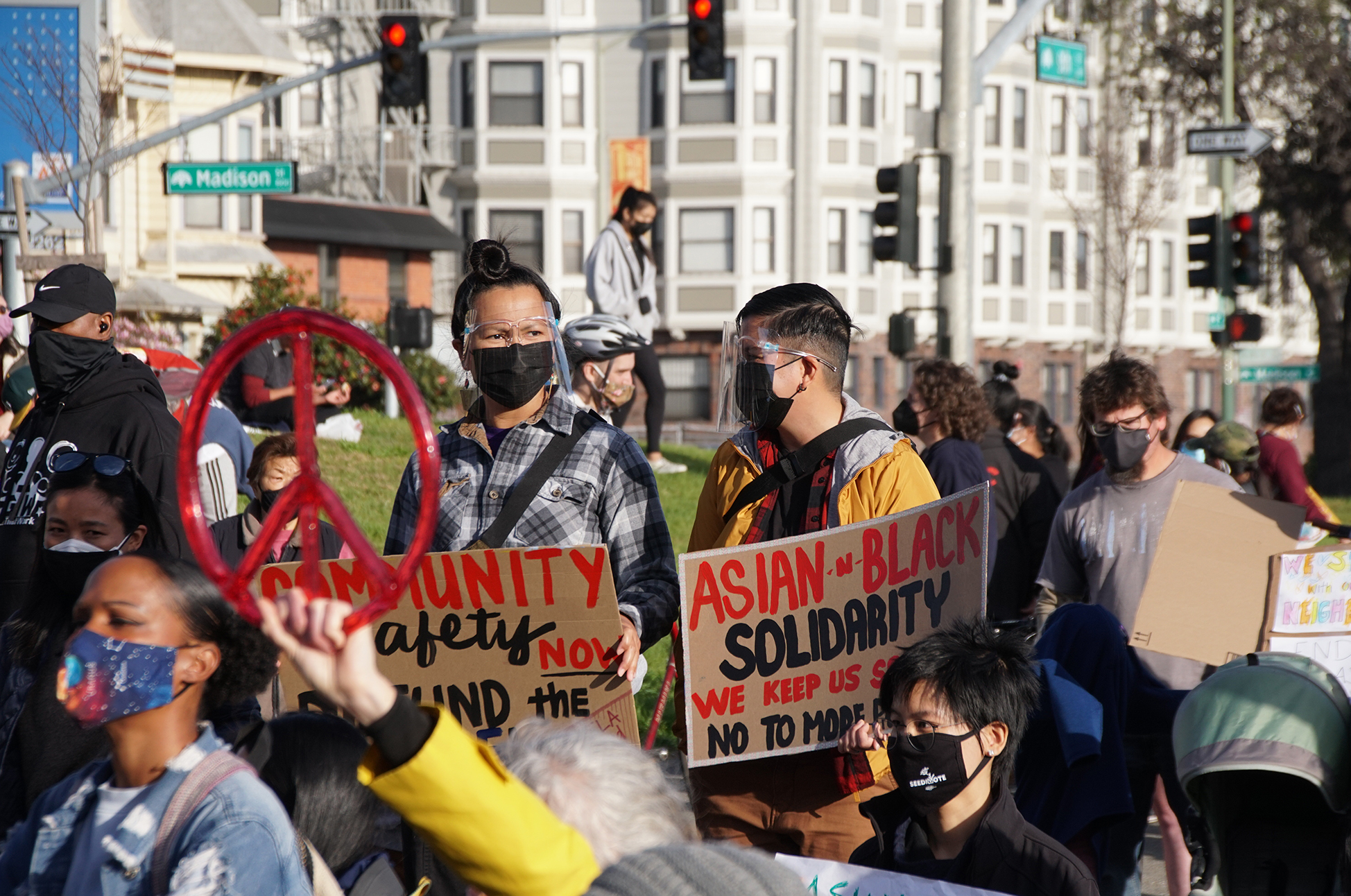 People rally at a February demonstration in response to anti-Asian violence in the Bay Area.

Since last year, Asian Americans have reported a surge in racist violence, often related to the COVID-19 pandemic. Hate crimes targeting Asian Americans and Pacific Islanders rose by 150% in major U.S. cities, per one study. And Stop AAPI Hate, a coalition of Asian American advocacy groups, recorded an alarming 3,795 reports of racist violence against Asian Americans from early 2020 to early 2021, with over 1,600 incidents in California alone. People were called racial slurs, spat on, and assaulted.

In the Bay Area specifically, there has been a spike in violent attacks on older Asians: In January, a 91-year-old man was shoved to the ground in Oakland’s Chinatown 84-year-old Thai man was shoved and killed in San Francisco. In March, 59-year-old Danny Yu Chang was violently beaten on Market Street in downtown San Francisco.

Then, on March 16, the entire nation reeled after a white man went to three massage spas in the Atlanta area and shot and killed eight people, including six Asian women.

Days later, APEN held a vigil in Oakland organized by a coalition of multiracial groups, which hundreds of people attended. People left flowers, lit candles, danced, and cried. In the end, APEN Organizing Director Alvina Wong, who is Asian, and Oakland City Councilmember Carroll Fife, who is Black, lit a paper lantern together inscribed with the words: “May we live without fear.” 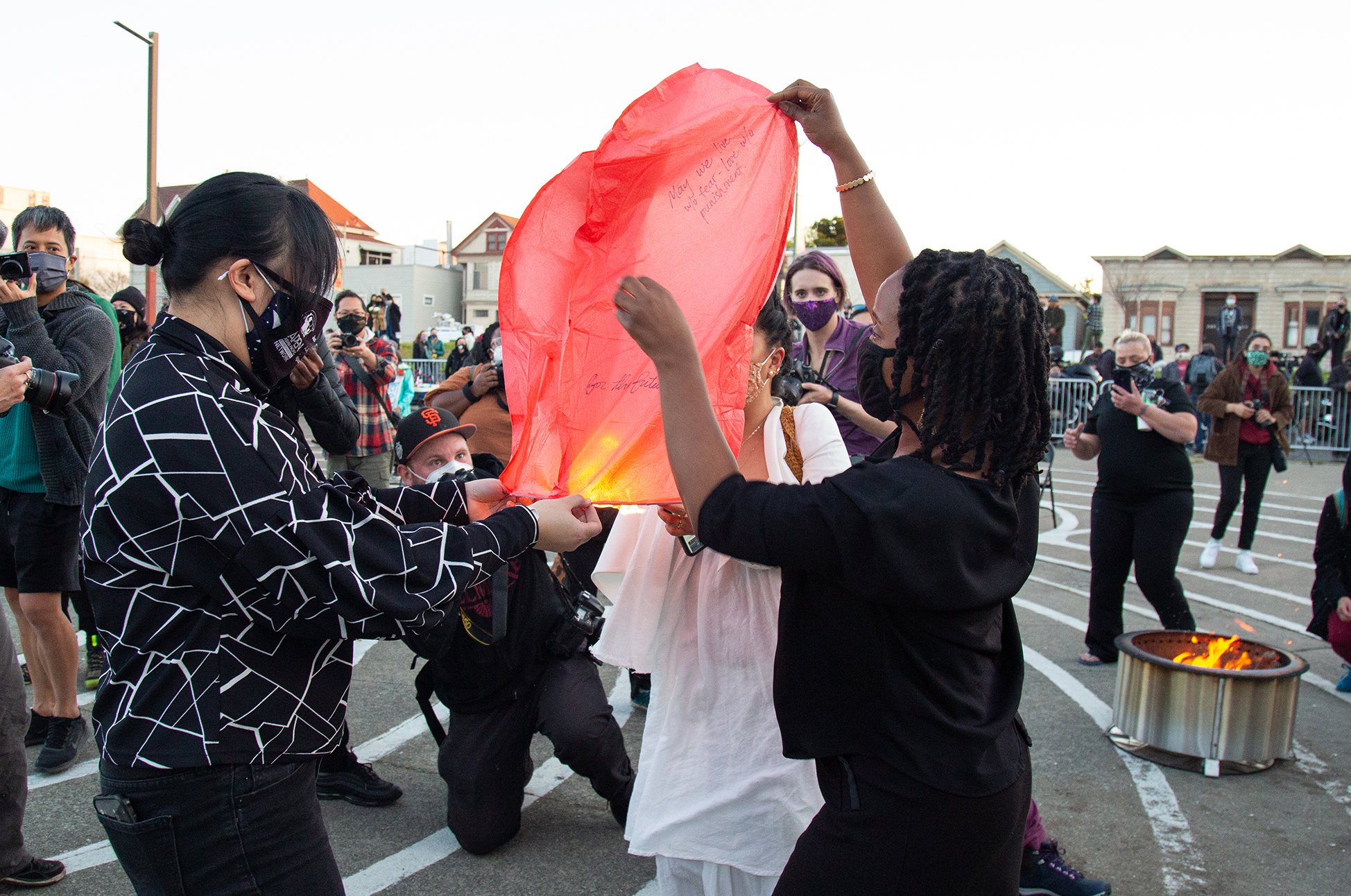 The concerns and fates of Asian activists in the Bay are indelibly intertwined with other communities of color. Last summer, as the nation, took to the streets to support Black Lives Matter and against police violence, APEN’s members protested as well, calling for their Asian siblings to join them. PayPal’s co-director Stanley Pun noted that the group’s Asian students “grew up in low-income neighborhoods where they were hyper-policed in similar ways to Black and brown folks in Oakland, so there’s similar distrust in investment in police as the solution.”

Joining calls for less investment in police in the wake of violent attacks on older Asians can be a controversial position within the Asian community, Pun noted, saying the group is “not a monolith.”

“There are humans in this movement who are against Asian hate but pro-police, so it’s a weird line we’re trying to navigate,” he said. But he insisted that the group’s vision is around “making sure communities of color are learning and understanding about each other, investing in getting people gainful employment, investments in housing and mental health resources.” 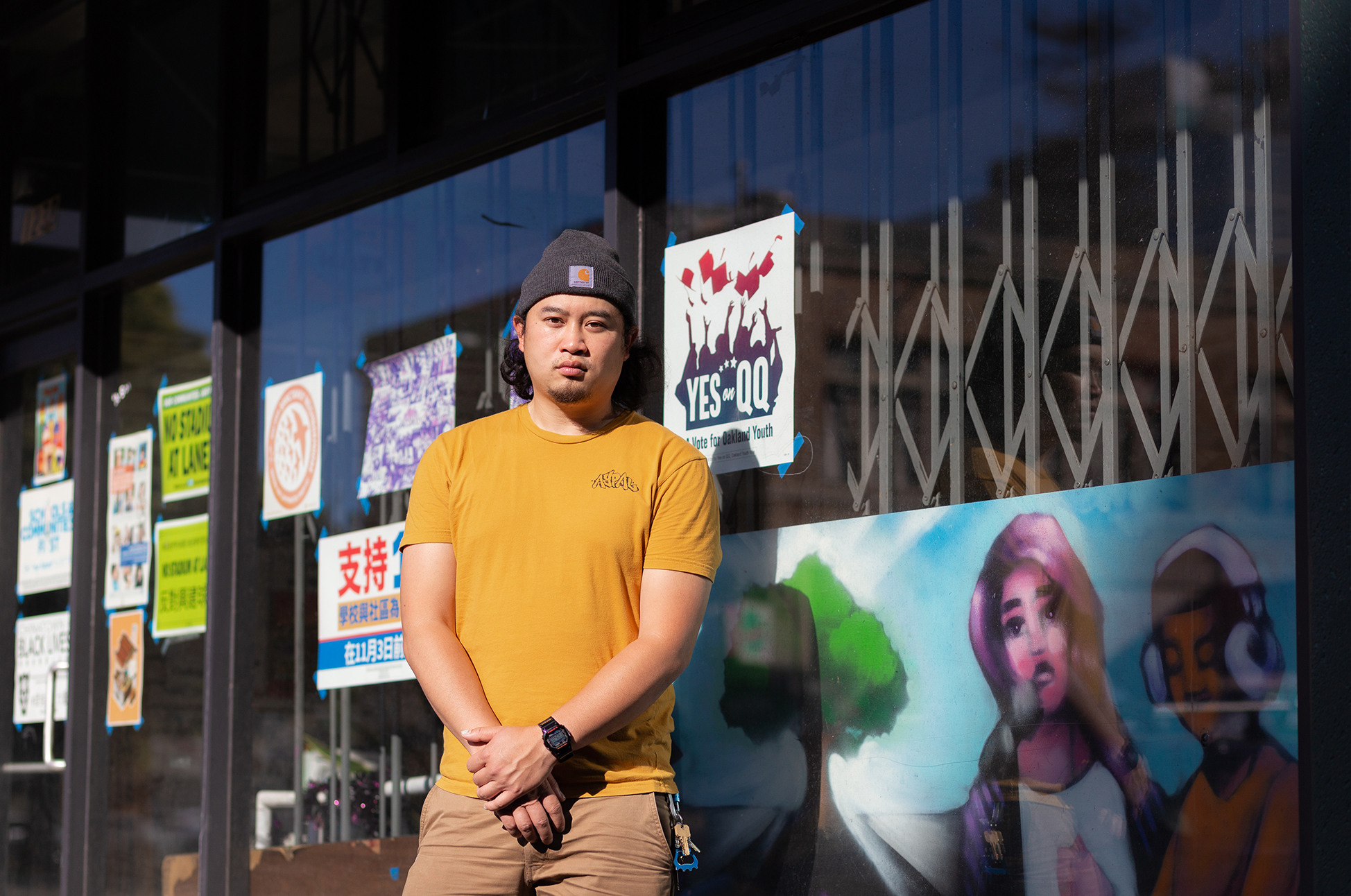 Stanley Pun poses at the AYPAL office in front of a mural created by some of the group’s youth and signs from campaigns they’ve organized.

“A lot of cases we’ve seen of violent acts were perpetrated by people needing mental health support — so how do we invest in those safety nets to be preventative, not reactionary?” Pun said. “How do we invest in things that would prevent them from happening in the first place?”

Huang echoed that there is “a lot of complexity” around the issues activists work on, especially in Asian communities and across multiracial spaces. But she believes the work is “better because of this complexity.”

“Our ability to hold many truths at the same time is critically important to advancing the way forward,” she said.

In California, where there have been worsening wildfires and increasingly unaffordable housing for years, the work of APEN, AYPAL, and other activists will go on long after the public’s attention has waned. They hope people are paying attention to what they really want.

The young people Pun works with “want more investment in education and employment and housing,” he said. “But I don’t know who will listen to them.”

With ‘Endlings,’ Playwright Celine Song Dove Deep Into Asian Identity. She Won’t Be Stopping There.