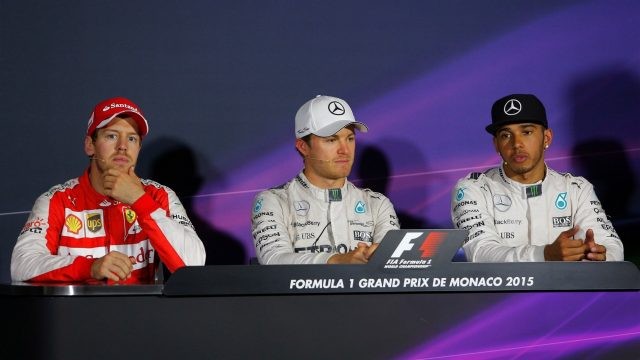 The four-time champion threw down a gauntlet to his rivals in emphatic fashion by lapping almost half a second clear of the chasing pack in Thursday’s second practice while Briton Hamilton struggled to finish more than a second adrift down in eighth.

“I think they will find more tomorrow,” said the German Vettel. “I was pretty happy with the afternoon, I thought I was a bit wild through the morning, touching barriers and stuff like that, but we still have some work to do.

“It’s more fun going faster here this year. It’s only Thursday so it would be nice to do it again on Saturday (qualifying).

“I was very happy with the first run this morning. Then we improved the car for the afternoon and the conditions improved too. You don’t get many clear laps here due to traffic but both myself and Kimi (teammate Raikkonen) seem quite happy with how we’re looking.”

Asked about Mercedes’ apparently disappointing performance, Vettel added: “I don’t know what happened to them today.

“It was a bit weird. I’m sure there’s a reason and they’ll be back on Saturday. I also think Red Bull will be strong on Saturday.”

On the tightest and most intricate circuit on the Formula One calendar, Vettel blitzed around the streets of the Mediterranean principality to clock a best lap in one minute and 12.720 seconds.

This was 0.487 seconds faster than the second fastest lap from Australian Daniel Ricciardo of Red Bull.

Third was the Ferrari of Raikkonen and Russian Daniil Kvyat was a surprising fourth for Toro Rosso.

Hamilton, who lies just six points behind Vettel in the drivers’ title race, was fastest in the opening morning session.

But he failed to clock a clean hot lap on the ultra-soft tyres in the second practice.

His Mercedes teammate Valtteri Bottas laboured in 10th, also without showing his true pace during a busy session interrupted by one red-flagged stoppage when Frenchman Esteban Ocon crashed into the barriers at the entry to Casino Square in his Force India.

The Mercedes team expressed concern before the weekend that their car would struggle for agility around the demanding and technical corners.

Team chief Toto Wolff suggested that they would bounce back on Saturday and had gone in the wrong direction with their set-up work on Thursday.

“We are lacking data so now it is about sticking our heads together and staying calm,” he said.

Hamilton said he was concerned though: “We were good in P1. Something went wrong in that session and we just have to find out why – the tyres were not working for whatever reason this afternoon.”

Briton Jenson Button, temporarily back from retirement to replace Fernando Alonso who is racing in the Indianapolis 500, was 14th for McLaren, one second and two places behind his teammate Stoffel Vandoorne.