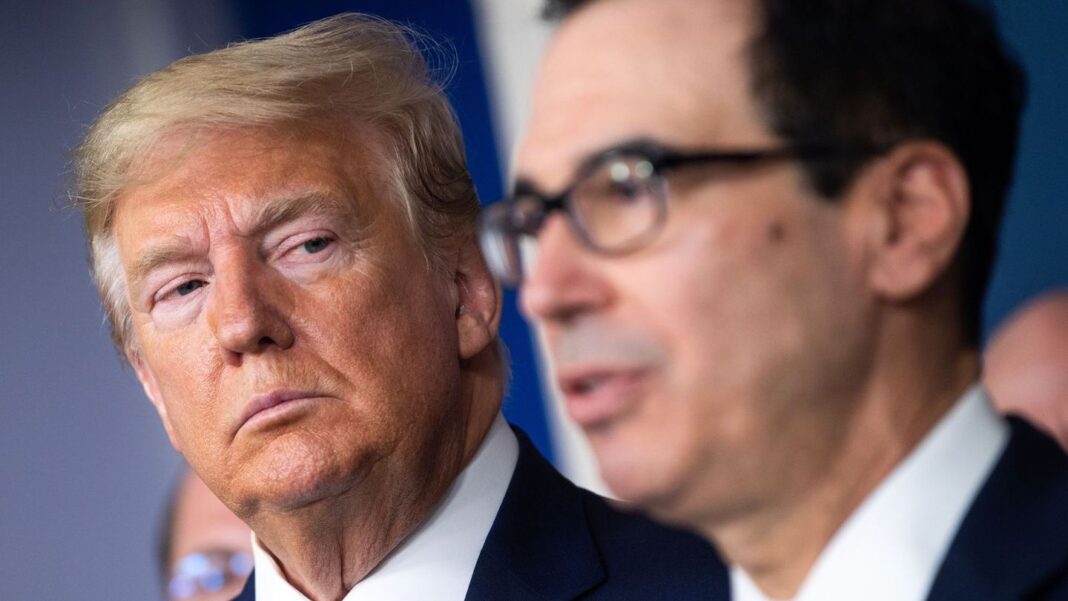 “I do, I really do,” Trump said, asked whether he would like to see the federal government take a stake in private companies. The federal government took equity stakes, effectively a type of ownership stake, in certain companies that were bailed out during the financial crisis in 2008 and 2009. It’s a way of protecting taxpayer investments in firms and ensuring that taxpayers potentially benefit when a company recovers.

“If the government makes big loans to companies during the coronavirus crisis, we want to avoid a situation where companies and their shareholders get all the upside and taxpayers get all the downside,” said David Wessel, director, Hutchins Center on Fiscal & Monetary Policy at the Brookings Institution. Wessel said equity stakes may help accomplish that goal, particularly if implemented through “warrants” — which give the right to buy shares.

Companies and industries have asked the White House and Congress for hundreds of billions of dollars in assistance as their operations have been disrupted in recent weeks.

“People are coming in for money. In some cases, no fault of their own,” Trump said, adding that “in some cases, where they did certain things over the course of the years, including by buying back stock, you know, they bought back stock and they paid a high price for it. As it turned out, But maybe I view that as a little bit differently than somebody that didn’t and somebody that built plants all over the United States.”

Such an approach could be one element of an enormous and multi-faceted $1 trillion stimulus plan that administration officials and lawmakers on both sides of the aisle see as an absolute necessity with American society turned upside down by the coronavirus and the economy crumbling. When one reporter at the briefing pointed out to Trump that the economy had effective frozen, Trump replied that “Everybody in the room knows that.”

But Trump’s comments also made clear that the White House has not made a number of crucial decisions about how to proceed at a time when the economic outlook continues to worsen.

Unemployment claims are jumping. The Labor Department reported Thursday that 281,000 people sought jobless benefits last week, up 33 percent from the prior week, and many experts believe the worst is yet to come.

As part of the broader plan, Treasury Secretary Steven Mnuchin said the Trump administration is working on a plan that would send most Americans $1,000 within three weeks and an additional $500 for every child as a way to flood the country with money and try to blunt the coronavirus pandemic’s impact on the U.S. economy. The deal would need congressional approval.

Mnuchin, speaking on Fox Business, said a second round of payments for the same amount could be sent within the next six weeks if the crisis continued. The White House’s urgency has intensified as economic forecasts have become increasingly gloomy. A J.P. Morgan Chase analyst forecast that the U.S. economy could shrink by 14 percent between April and June, which would mark the worst quarterly contraction since World War II.

Senate Majority Leader Mitch McConnell (R-Ky.) on Thursday detailed the emerging pieces of the economic plan that he said was based on four “pillars” – payments to small businesses, direct cash payments to individuals, loans to industries decimated by the virus, and a surge in funding to the healthcare industry. He called the small-business plan, led by Sen. Marco Rubio (R-Fla.), a “rapid injection of cash” to smaller companies so they can continue paying wages, money that will essentially be grants not requiring repayment. That’s expected to cost about $250 billion.

McConnell said the cash payments to individuals would be paid out “from the middle class on down,” but at one point referenced money going to “taxpayers,” amid reports that some Republicans are eyeing lower payments for those who don’t pay federal income taxes.

On industry support — where the Trump administration has proposed $50 billion for airlines and $150 billion for other sectors — McConnell confirmed that the payments to industry like airlines would not be grants and instead come as a type of loan.

Democrats have demanded that firms receiving federal funding not use the money for large executive bonuses or stock buybacks that help investors. A two-page memo with the Treasury Department’s priorities for the next package included limits on “increases” in executive compensation, but Trump suggested Thursday he would approve tighter limitations.

“As far as I’m concerned, conditions like that would be OK with me,” Trump said on preventing stock buybacks or big bonuses for companies that receive assistance.

“This is not Congress’s last chance to legislate,” McConnell said, adding, “We will not leave until we do our job.”

McConnell is aiming to release a proposal that unifies the Senate GOP and the Trump administration as early as Thursday before turning to negotiations with Democrats.

The White House until several days ago had sought to pass a large tax cut measure to try and boost the amount of money people took home, but that idea was panned by lawmakers from both parties and seemed ineffective given an expected spike in unemployment. So this week the White House shifted to a goal of sending cash payments to many Americans, as quickly as possible.

The Treasury Department has estimated that such an approach could cost $500 billion and serve as a large part of their $1 trillion economic rescue package it wants Congress to authorize immediately.

But many parts of the White House’s approach remain in flux, and lawmakers from both parties are debating a number of different ideas.

On the cash payments to individuals, one leading GOP plan would offer $1,200 to most taxpayers but only $600 to poor families who pay less in taxes, according to two people with knowledge of the discussions granted anonymity to discuss internal conversations. The benefit would begin phasing out for people with more than $75,000 in annual income.

Discussions in the White House and among members of Congress are also growing about doing a fourth fiscal package to stimulate the economy after passage of the $1 trillion legislation currently being discussed. That fourth package may include a large infrastructure package, or the payroll tax cut initially floated by the White House, according to two people aware of the early talks.

House Democrats, wary of being sidelined as a potential trillion-dollar stimulus bill is negotiated between the White House and Senate Republicans, are trying to assert their power by proposing their own sweeping coronavirus economic rescue package in the coming days.

But Democrats have their own issues to work through — including how to put their own stamp on what is emerging as the centerpiece of the Republican-led plan being drafted in the Senate that could be unveiled as soon as Thursday: the estimated $500 billion plan to deliver checks directly to Americans over the next 90 days.

Tensions over the shape of the package emerged in a conference call Wednesday of House Democratic leaders and committee chairmen.

House Majority Whip James E. Clyburn (D-S.C.) and Financial Services Committee Chairwoman Maxine Waters (D-Calif.) argued for outgunning Republicans on the size of the cash payments, according to three participants on the call.

Waters, for instance, circulated a plan Wednesday calling for $2,000 per adult and $1,000 per child monthly stipend until the crisis abates.

Other Democrats — including Speaker Nancy Pelosi (D-Calif.) — while not ruling out direct payments, urged a more balanced course. Multiple committee chairmen argued that beefing up existing safety net programs — such as unemployment insurance and Medicaid, as well as small business assistance, would provide more targeted and effective relief.

All Democrats on the call, according to the participants, agreed that any cash payments should be means-tested to exclude the wealthiest Americans, a sentiment the White House appears to share.

In a letter to fellow Democrats late Wednesday, Pelosi alluded to the debate as “ongoing discussions in our Caucus on how to put money quickly in the hands of Americans.”

“I think members are really just concerned about, what’s the fastest way to go?” said one House Democrat, who spoke on the condition of anonymity to frankly describe conversations with colleagues.

Schumer and Senate Democrats have released a framework of their own — a $750 billion package that prioritizes a “medical surge,” federal funding for child care and a emergency liquidity for small businesses. Much of the bill is devoted to existing safety net programs — not cash payments.

But payments have backing among Senate Democrats, too — notably, a proposal from Sens. Michael Bennet (Colo.), Cory Booker (N.J.) and Sherrod Brown (Ohio) that would put an immediate $2,000 into the hands of every American adult and child, with more possibly to follow.

On Capitol Hill, the Senate convened amid somber news that the first two lawmakers had reported testing positive for covid-19. Reps. Mario Diaz-Balart (R-Fla.) and Ben McAdams (D-Utah) are both members of the House, which is not in session this week, but the news brought the coronavirus ever closer to home.